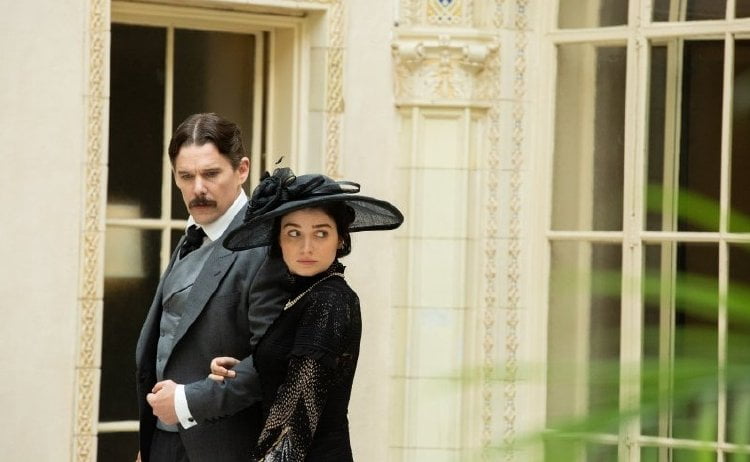 ‘Is nature a giant cat and if so, who strokes its back?’ asks a young boy after his father explains that the static electricity he just saw on his pet was the same element that shot through the sky.  Knowing that his pursuit of knowledge would result in the ignorance of recognizing just how much more he didn’t know, the boy did it anyway.  After immigrating to America, he would become one of its greatest inventors, his belief in alternating current in conflict with his one time boss, Thomas Edison’s (Kyle MacLachlan), insistence on direct current.  His name was Nikola “Tesla.”

While writer/director Michael Almereyda ("Nadja," "Majorie Prime") covers much the same ground as last year’s “The Current War,” his film couldn’t be more different, beginning with its continuing feline theme.  Almereyda’s idiosyncratic, often anachronistic take features a narrator, Anne Morgan (a note perfect Eve Hewson, "This Must Be the Place"), who frequently advises us that what we are seeing ‘didn’t happen that way,’ but what a joy it is to watch Tesla mash an ice cream cone into Edison’s face in an escalating food fight!   Ethan Hawke’s intense, slightly mannered performance (which, in fact, suits the character) makes the juxtaposition of his period perfection journeying through environments on roller skates or expos where a Smartphone is checked and even stepping up to a microphone to perform Tears for Fears ‘Everybody Wants to Rule the World’ spark like Tesla’s magnifying transmitter.

Almereyda’s telling of the tale presents Edison as slightly more benign, although MacLachlan feels miscast here.  Edison’s first wife’s death is far less romanticized than in “The Current War,” the reason for death stated as a morphine overdose.  By dint of using Hewson’s Anne as our guide, “Tesla” is more episodic, but all the major moments are here – from Edison’s trying to discount George Westinghouse’s (Jim Gaffigan, looking the part but sounding a touch too modern) belief in Tesla’s alternating current with demonstrations cruelly electrocuting animals (Almereyda really pushes our buttons by using a dog with pleading eyes) to hatchet murder William Kemmler’s (Blake DeLong, Netflix's "When They See Us") horrifically botched execution to the Pavilion of Lights at the World’s Fair.  The later features another imagined scene, Edison treating Tesla to a piece of pie and the admission that he was wrong about alternating current.

Of course one of the main differences between the films is Almereyda’s focus on Tesla versus Edison and Westinghouse and the man he and Hawke paint is so work obsessed he clings to chastity as a necessary condition, much to Anne’s frustration.  He’s also kind and trusting, traits which would frequently make him the victim of swindlers (Anne will ask if idealism can coexist with Capitalism).  We see the swirl of celebrity drawn to Tesla’s magnetism, from Sarah Bernhardt (Rebecca Dayan, "Limitless") to an Indian guru to financier J.P. Morgan (Donnie Keshawarz, "Ad Astra"), who funded much of his work.

As in his film on social psychologist Stanley Milgram, "Experimenter," the filmmaker gets around budgetary restrictions employing various devices, like the still photograph backdrops he frequently uses to establish location, his actors walking in front of them.  One gloriously demented scene featuring Tesla’s transmitter plays like a cross between Robert Egger’s “The Lighthouse” climax and James Whales’ “Frankenstein.”  Almereyda’s shaken up the biopic and his “Tesla” is electrifying.

Nicola Tesla (Ethan Hawke) was an inventor, engineer and forward-thinking futurist who was a Thomas Edison employee, contemporary genius, competitor and the man who brought AC power the world. His story is told, with elements of the future he would inspire, in “Tesla.”

This is writer/director Michael Almereyda’s first foray in telling a historical biographical story of a man who we knew little about, until fairly recently, mainly because of Elon Musk’s same-named electric car company. The result is a combination of an old fashion biography – I thought of the old biopics of the 1930s and 40s, like “Dr. Ehrlich’s Magic Bullet (1940) and “The Story of Louis Pasteur (1936)” – and a story that uses tantalizing hints of the future to advance that bio.

This is a three-hander with Tesla, Thomas Edison (Kyle MacLachlan) and Anne Morgan (Eve Hewson), daughter of financier J.P. Morgan and Tesla’s fictionalized paramour, mentor and muse and the stories narrator. Obviously, the main focus is on Nicola the inventor and genius and his collaboration with Edison (giving a thumbnail look at the iconic inventor of the light bulb, his arrogance and ruthlessness).

The use of Anne Morgan and her fictional relationship with Tesla may turn off some with its creative invention. I found the idea and Hewson’s assured performance to actually advance the story and helped make the taciturn Tesla sympathetic.

The filmmakers touch upon the many things during the course of “Tesla,” especially the rivalry that developed between Edison and his once-employee. Edison, who invented DC power, had visions of being the man to electrify the world. Tesla’s rival invention of AC current, though, proved better and more efficient, sparking the rivalry that would last for years.

Director Almereyda touches on all of Tesla’s career points and the production covers those points quite well, including the Edison-Tesla feud over which electrical current, AC versus DC, kills more humanely – DC lost in a horrific way. As expected, the inventor’s tinkering with electricity is on display, especially his grand experiment to provide wireless power to the world.

The combination of historical biopic and modern invention inserted in it may be a distraction for some but for me it worked, And, I got a history lesson, of sorts, too.