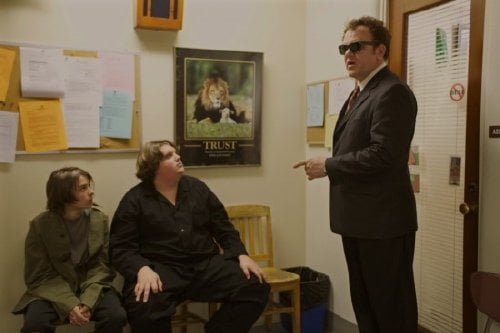 Terri (Jacob Wysocki) is an obese 15-year old boy who has issues with school, teachers and his fellow students. The butt of verbal abuse by other students, particularly a boy called Dirty Jack (Justin Prentice), and chronically late for school, he ends up in the office of the school principal, Mr. Fitzgerald (John C. Reilly, who takes the boy under his wing in “Terri.”

High school assistant principal Mr. Fitzgerald (John C. Reilly, "Cedar Rapids") takes notice of an overweight loner who wears pajamas to school and has his secretary add another one of his special a.m. appointments for "Terri." Coauthor (with screenplay by Patrick Dewitt)/director Azazel Jacobs's last film, "Momma's Man," was about a married man with a new infant who was trying to return to the womb. With "Terri," he does a complete about face, focusing on a teen who has had to grow up fast, taking on the responsibility of his mentally degenerating Uncle James (Creed Bratton, TV's 'The Office') in the absence of missing parents on what appears to be nothing more than a disability check. "Momma's Man" was a more original film, but Jacobs has captured something very real in this coming of age tale, with a breakout performance from Wysocki (2010's television series 'Huge'), and Reilly turns in his second strong supporting performance of the year. Terri's weekday routine doesn't just include getting ready for school, but shepherding his uncle through breakfast and meds, something which frequently makes him late. His homeroom teacher Mrs. Davidson (Tara Karsian, TV's 'ER') greets his late arrival with a sour expression, her profession obviously a source of personal misery. Sent to the assistant principal's office (no principal is ever mentioned), Terri is surprised to find a guy who seems more intent on befriending than berating him, and is won over to the idea of Monday morning 'talk' sessions as a replacement for homeroom hell and his selection as one of the 'good heart' vs. 'bad heart' kids. Terri is put off when he discovers Mr. Fitzgerald's other chat sessions are with the outcasts of high school - Chad (Bridger Zadina), an almost feral kid with a huge hank of hair missing from his head; Donnie, a handicapped kid, etc. - and rejects his categorization as a cover for something else entirely. He returns to the office, though, to plead the case of Heather Miles (Olivia Crocicchia, TV's 'Rescue Me'), a girl being transferred for having participated in a public sexual act during Home Economics. Fitzgerald treats his eye witness account and perception with respect and Heather begins to befriend Terri. (His former Home Ec partners, the two gossipy Rachels who delighted in the scandal, drop him in disgust - a subtle 'Heathers' reference here?) Chad also shows up one afternoon and Uncle James, in a more lucid moment, serves the boys beans on toast, a house staple, pleased to see that Terri has a friend, but when Chad relates a shared moment with Mr. Fitzgerald that Terri thought was unique to himself, he flips out on Chad and once again feels betrayed by the older man. There are a series of tentative trusts built, frayed, and renewed throughout the film, which culminates in a socially explosive evening when Chad crashes Terri's first 'date' with Heather, bringing along booze and further complicating matters by raiding James's medicine cabinet. Chad acts out in every which way, Heather displays her fragile neediness (and, quite possible, history of abuse) and Terri his thoughtfulness and maturity, despite engaging in the teenaged drinking. It is a scene rife with treacherous pitfalls which these damaged people negotiate with different levels of skill and Jacobs and his young actors create an uneasy tension. He also uses bits and pieces of life that comment upon the characters - Terri's abhorrence for a job his uncle sets before him transmuted into something else adults fail to understand, the way people react to the death of Fitz's older secretary, Terri's reactions to either end of Uncle James's mental spectrum. Wysocki wisely underplays Terri as a lonely boy, but not a timid one (he reacts with calm reasoning to classroom taunts) instilled with decency. The casting of the film, filling roles mostly with non-regular television players, has been done with care, resulting in some real discoveries. Zadina puts himself out there and Crocicchia tells us a lot of what we need to know about Heather just in the way she childishly clutches a pen. Creed Bratton gives a moving portrayal of a man who could very well be the source of his nephew's dignity, a performance so different from 'The Office's' Creed, you may not recognize him. The script makes it clear that Reilly's character empathizes with his 'good hearts' from personal experience, but his Mr. Fitz isn't simply still one of them so much as a compassionate man trying to hang on through a different set of adult problems.

Azazel Jacobs, who brought us the near-autobiographical “Momma’s Man” in 2008, shows that he has a deft hand in writing and directing and “Terri” represents the next step – up – in his career. He elicits solid performances from his young cast and John C. Reilly brings his talent, experience and comedic timing to his Mr. Fitzgerald – a man who came from a similar, difficult childhood as Terri. Newcomer to the feature film scene, Jacob Wysocki, makes a splash as a dysfunctional young man on the verge of adulthood. He is lucky to have a mentor like Mr. Fitz. The other principal characters - pretty but conflicted Heather (Olivia Crocicchia), troubled Chad (Bridger Zadina), who exhibits his insecure neurosis by pulling his own hair out in clumps, and Terri’s over-medicated Uncle James ( Creed Bratton from TV’s “The Office”) – make this an ensemble film where you care about the characters and their problems. “Terri” is a total package and a very different coming-of-age fim. Terri is not the most sympathetic character, when you first meet him, but the newcomer and his writer-director make the boy a flesh-and-blood character. Unfortunately, this fine little film is not likely to grab a share of the box office dominated by summer blockbusters. However, if you are tired of Transformers and superhero flicks and want something of more substance and feeling, then give “Terri” a try.