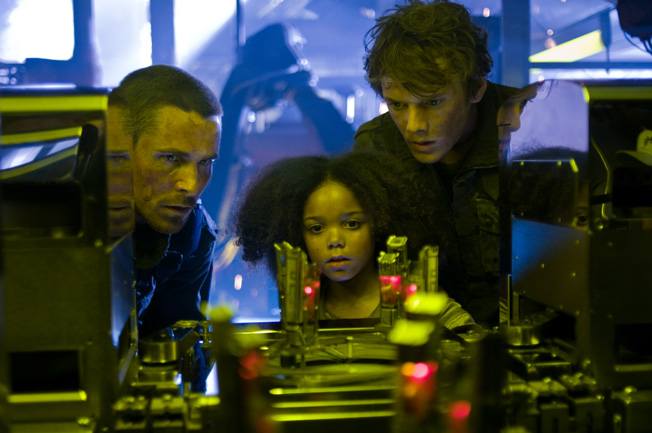 After being convinced to donate his body to science before his execution for murder in 2003, Marcus Wright (Sam Worthington, "The Great Raid," "Rogue") awakens to discover that fifteen years have passed and that Skynet is attempting to obliterate the human race. He learns of the Resistance from the voice of John Connor (Christian Bale, "The Dark Knight") on a short wave and is the one to bring Connor the news that the young man who will become his father, Kyle Reese (Anton Yelchin, "Star Trek's new Chekov), was taken away in a Skynet prisoner transport just as General Ashdown (Michael Ironside, "The Alphabet Killer") has ordered a bombing raid with no evacuation plans in "Terminator Salvation."

So, after J.J. Abrams saved "Star Trek," can director McG together with his internet hissy fit star Bale jump start "Terminator?" The answer is...not really. While some of its demographic may be happy to see the return of the man-machine apocalypse, much of the writing (from John D. Brancato & Michael Ferris, the team behind "The Game" and "Terminator 3: Rise of the Machines") is hokey as hell. As in "Salvation" - it's all about cutting a guy a second chance. It's also about making Skynet's creations resemble "Transformers" (great huge, headless terminators, which apparently can approach without making a sound, fold back into the top of giant HK flying machines). McG has given the production a look that resembles "The Road Warrior" more than the bleak desolation of earlier "Terminator" films. The pack of people led by Virginia (Jane Alexander, "The Unborn," with Maxian locks all braided and pegged) are even hoarding their gasoline and Reese's sidekick Star (Jadagrace) is this film's feral kid. The movie should make a star of Australian actor Worthington, who has strong screen presence and nice chemistry with Moon Bloodgood ("What Just Happened," "Street Fighter: The Legend of Chun-Li"), the Resistance fighter who he rescues and who then stands up for him when Connor decides he's on the machines' side. Bale offers his dullest performance to date as the earnest hero and one must think a moment to remember when Bryce Dallas Howard ("The Village," "Lady in the Water") held promise - as Connor's wife she's nothing but a pleasant face. More interesting is Helena Bonham Carter ("Sweeney Todd: The Demon Barber of Fleet Street") as cancer victim Dr. Serena Kogan who trades a kiss for Marcus's signature on that donor form. If only we understood her back story more. Yeltsin seemed oddly cast, but makes his version of Reese work. There is just too much illogic here. Why would Connor waste lives and so much firepower going after Marcus? How can McG show Marcus hung over a void (arms outstretched, just like the 'crucifixion' of the execution chamber) then cut to a closeup of him getting a faceful of Connor who was standing on a platform 2-3 feet away? And let's not get into what can be survived here. "Terminator Salvation" isn't awful, it's just not terribly original or exciting. McG throws in just enough of Arnold's iconicism to give that sizzle of recognition without milking it.