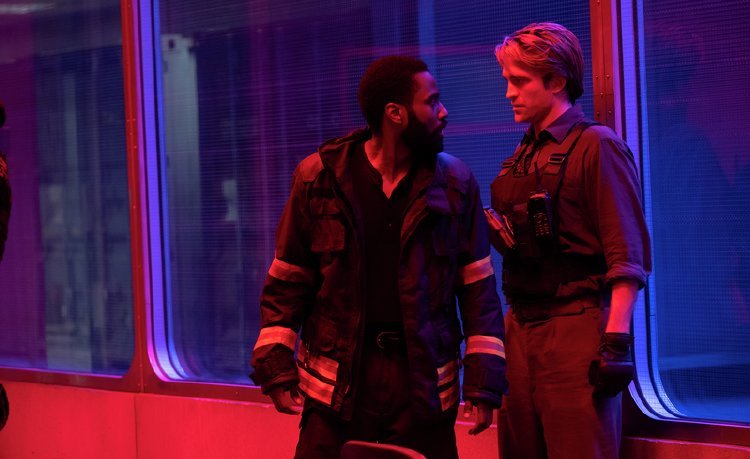 A man (John David Washington) on a mission to retrieve an asset during a terrorist attack on a Kiev symphony performance notes a strange phenomenon during the chaos, a bullet extricating itself from where it was lodged, but before he can dwell on it, he is captured.  With great difficulty, he manages to swallow his cyanide capsule only to come to and learn from Victor (Martin Donovan) that this was a test, one which will catapult him deeper into an escalating extinction event that insiders know as “Tenet.”

Christopher Nolan’s “Tenet” is a sleek, mysterious clockwork which, like its title, flips in its middle and doubles back on itself, exposing its inner machinations.  As The Protagonist, John David Washington imbues the director’s chilly aesthetic with humanizing warmth.  All of Nolan’s usual themes are here as is his futuristic technical prowess, but once again his razzle dazzle is marred by an unbalanced sound mix which obscures stretches of dialogue, leaving us to wonder if those things that look like plot holes were explained under cover of Ludwig Göransson’s ("Black Panther") score.  Still, there’s something about “Tenet’s” lead and his relationship with the man who mysteriously partners with him, Robert Pattinson’s casually playful Neil seemingly dropped in from a Graham Greene novel, that makes this one a bit more enjoyable than Nolan’s other sci-fi actioners.

After being schooled in inversion by Laura (Clémence Poésy), who demonstrates bullets that are caught by their guns, weapons ‘streamed back from the future’ by someone who could impact their past with something worse than a nuclear holocaust, The Protagonist traces their unique metal composition back to India and Priya (Dimple Kapadia), who, under duress gives him information that leads him to his ultimate target, Russian arms dealing billionaire Andrei Sator (Kenneth Branagh).  The way into Sator’s world turns out to be his wife, Kat (Elizabeth Debicki), an art expert whose misidentification of a Goya forgery cost her husband over $9 million dollars, something he now uses as blackmail, along with their young son, to keep anyone else from having the woman who no longer wants him.

The protagonist and Neil’s exploits will find them bungeeing up a building in Mumbai, infiltrating a Freeport where the rich store valuables to avoid import taxes by having colleague Mahir (Himesh Patel) crash a 747 into it and boxing in vehicles in a highway chase while trying to save Cat from an abandoned, runaway car.  There’s also an F50 foiling catamaran race, but that doesn’t feature both forward and reverse action which we see in the prior two setups and which, frankly is astonishing to watch.  At Oslo’s Freeport, The Protagonist gets into hand to hand combat with a masked, inverted human.  During that highway chase, vehicles are traveling both forward and backward in time.  Nolan’s conception and realization of these sequences are breathtaking.

And then our Protagonist, once again looking to save Cat, deigns to become inverted himself, a state which requires oxygen and great mental stamina to deal with lungs which otherwise would not know how to breath in a world where everything is happening in reverse.  At this point, several sequences we have already seen are revisited as he goes forward in a world going backwards, giving us surprising information about what we’d seen before.

Branagh’s villain has been referred to as Bondian, but he could just as easily spring from a real world “Batman” movie with his rocket launching yacht, military copters and astonishingly egotistical motivation.  His purring Russian schtick, however, suffers most in the sound mix.  Washington’s chivalry towards the damsel in distress along with Pattinson’s coolly amused, stiff upper lip heroism adds some much needed soul to Nolan’s cerebral cool.  Debicki is, unfortunately, mostly a pawn, but she has her moment during the film’s climax, another neat trick of Nolan’s two-sided coin.  The film also features Aaron Taylor-Johnson and Fiona Dourif as military inversion specialists while Nolan regular Michael Caine checks in and out early on as a London contact.

Cinematographer Hoyte Van Hoytema ("Dunkirk," "Ad Astra"), shooting with IMAX and 65mm cameras in some pretty intense conditions, and production designer Nathan Crowley give the whole a sleek, steely vibe, occasionally goosed with colorful locations like the Amalfi Coast.  I noticed one odd cut by editor Jennifer Lame ("Hereditary," "Marriage Story") who otherwise has stitched the two-way action together with panache.  Göransson’s score hums and reverberates and, I could swear is played backwards, then forwards, but another viewing (and listening) would be in order to be sure.

Speaking of which, I had the privilege of seeing “Tenet” in a special, socially distanced press screening in a large capacity theater with very limited attendees.  I would not have taken the risk at a regular screening, especially where mask removal is allowed for concession consumption.  Nolan is a stickler for the theatrical experience, but while one appreciates why, the filmmaker’s insistence on his audience taking risks during a pandemic is troublesome in the extreme.  “Tenet” will eventually be available to view in one’s home or even on a big screen in a post-pandemic world and that is what this review encourages (perhaps even giving its audience some control over Nolan’s frustrating sound issues).  I never bothered watching either “Inception” or “Interstellar” a second time, but eventually, given the right conditions, “Tenet” will be worth another whirl.