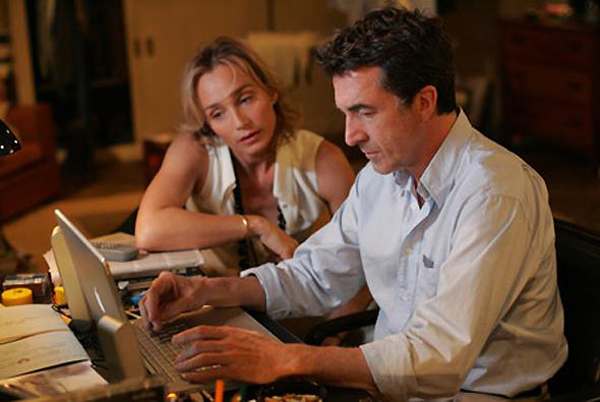 Dr. Alex Beck (François Cluzet, "Late August, Early September," "The Adversary") is skinny dipping with his wife Margot (Marie-Josée Croze, "The Barbarian Invasions," "Munich") when a disagreement drives her to shore. She calls out for him and disappears. Alex is suspected, but it becomes apparent she was the victim of a serial killer. Or was she? Eight years later, Alex receives an email with what appears to be a recent video of his wife that instructs him to "Tell No One."

Sophomore director Guillaume Canet ("My Idol"), who stars in Claude Berri's "Hunting and Gathering" and is the bad guy here, has adapted American novelist Harlan Coben's book into a Hitchcockian innocent man maze of twisty turns with a myriad of characters. Unfortunately, one's attention is so completely focused on not losing one's place amidst all the secrets and who're who's that it is difficult to care much about the love story at the film's center. The film is overpacked. Alex does confide in someone - his sister Anne's (Marina Hands, "The Barbarian Invasions," "Lady Chatterley") wife Hélène (Kristin Scott Thomas, "The English Patient," "The Valet"), who's concerned about her brother-in-law's inability to get over the loss of his wife. He also finds a friend in Bruno (Gilles Lellouche, "Love Is in the Air," "Family Hero"), a local street tough whose son he saved years earlier. Police captain Eric Levkowitch (François Berléand, "A Comedy of Power," "Transporter II") still has questions about the original case - who placed the anonymous 911 call? how did a knocked out Alex get onto shore the night of the murder? - but tends towards Beck's innocence, even if his lieutenant is less convinced. When Alex tries to meet Margot in a park, she sees a trap - Bernard (Olivier Marchal, "36 Quai des Orfèvres") communicates with walkie talkie to a group encircling the bench where Alex awaits - but Alex spies her leaving even as they do not. He's chased down, but Bruno comes to the rescue. Shortly thereafter, though, Margot's best friend Charlotte (Florence Thomassin, "A Matter of Taste," "57,000 Kilometers Between Us") is murdered in her photographer's studio and Alex finds himself a wanted suspect once again. Are there ties with Margot's disappearance and the murder of wealthy senator Gilbert Neuville's (Jean Rochefort, "The Man on the Train," "Mr. Bean's Vacation") adult son Philippe (Canet) around the same time? Why did Margot suggest she'd had an affair with the chief suspect in that case? What about Margot's autopsy report with missing photos that suggests another body altogether and has only been seen by the victim's own father, former police inspector Jacques Laurentin (André Dussollier, "Lemming," "Private Fears in Public Places")? The story does come neatly together with all pieces in place, but the film is so crowded with characters that veteran French actress Nathalie Baye ("Catch Me if You Can," "Le Petit Lieutenant") seems superfluous as Alex's attorney. People's place in the plot is often unknown (who is Bernard, for example?) so that one is keeping track of two realms of characters, those whose relationships we know and those we do not. Technically, the film is top notch and includes one of the most exciting and extensive foot chases put to screen. The director's use of pop songs, however, is too literal and heavy handed. Canet's put together a good policier told from the suspect/victim's perspective but Canet does not engage his audience enough emotionally. A framing device shows us Margot and Alex as children, carving initials in a tree and kissing. It's cute, but the gradual reveal of their connections to one man through their parents makes the subterfuge seem a bit overblown. It's telling that the film's most rewarding character relationship is Alex's with Bruno, which gives the film some much needed humor. "Tell No One" is technically proficient and will be sure to delight mystery fans, but despite Cluzet's centering performance, the film moves too fast to engage with the lives at stake.

Eight years ago, Dr. Alex Beck (Francois Cluzet) and his beautiful wife, Margot (Marie-Josee Croze) were in love and very happy. This idyllic life changed in a flash when unseen killers take Margot’s life and Alex is knocked unconscious and left to drown. Still, he was a prime suspect in the murder case that never closed and, now, years later, Alex receives mysterious email from someone who may have revealing information, but he is to “Tell No One.” Director Guillaume Canet adapts the Harlan Coben thriller novel about a man who, years ago, apparently lost his beloved Margot at the hands of a serial killer. But the killer, guilty of eight other murders, denies involvement in Margot’s death, making Alex a prime suspect in the case. Now, the police have discovered to bodies of two people near the site of Margot’s violent death and, once again, Alex is a suspect. He starts receiving mysterious email messages about Margot with the admonishment to “tell no one” about the correspondence. There are more involved than just the cops trying to trap Alex as he tries to unravel the mystery of Margot. This is an ambitious tale that has good guys, bad guys, innocents and not-so-innocents as it spirals into a cat-and-mouse game that forces Alex to, frantically, work to get to the bottom of the whodunit. The result is a fast-paced, sometimes confusing thriller that has many threads and players, all focused on bringing Alex down ­ for the cops, his arrest; for the ambiguous bad guys, his death. All the while, the truth about Margot slowly unfolds. The sometimes confused story ­ with so many players, a who’s who checklist is needed to keep things clear ­ is aided with the oft-thrilling chases that punctuate the film. One, where Alex is pursued by the police across the heavily-trafficked Paris beltway, is the most exciting in the film and is done without CGI! You have to love stuntmen.