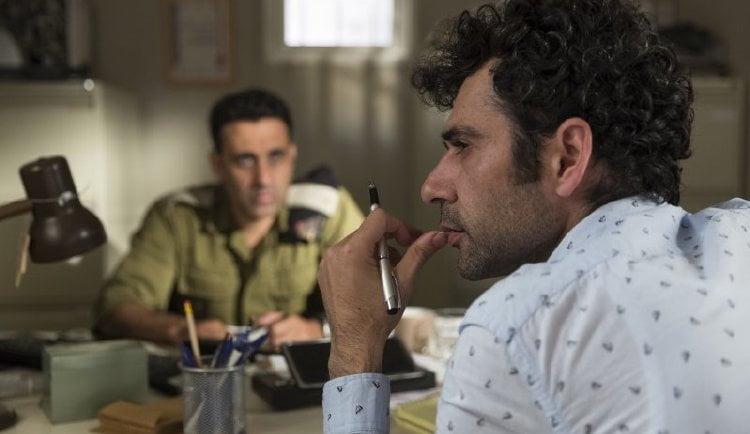 Salem (Kais Nashif), through a favor from his uncle, lands a low-level production assistant job as Hebrew translator for a popular Palestinian TV soap opera. When stopped at an IDF checkpoint while on his way home, he is brought before Captain Assi Tzur and questioned. To get out of any hot water he may be in, he tells the commander that he is the writer for “Tel Aviv on Fire.”

It's 3 days before 1967's Six Day War. Palestinian freedom fighter Marwan (Ashraf Farah, TNT's 'Tyrant') wants to keep the Zionists from occupying Jerusalem and gives Manal (Lubna Azabal, "Incendies") a mission to cozy up to Israeli General Yehuda Edelman (Yousef 'Joe' Sweid). It is also the first day on the job for production assistant Salam Abbass (Kais Nashif, "Paradise Now"), whose run-in with Captain Assi Tzur (Yaniv Biton) at a Ramallah border crossing will have a serious impact on that plot from Palestine's hit soap opera "Tel Aviv on Fire." There have been a number of theatrical movies which have used the soap opera to present alternate realities, such as John Candy's "Delirious," and comment upon the lives of its cast and crew, like "Soapdish." Palestinian cowriter (with Dan Kleinman)/director Sameh Zoabi's film does a little bit of both while also taking on the Israeli/Palestinian conflict. Nashif, who looks like a cross between 'Seinfeld's' Michael Richards and Liev Schrieber, is delightful as the low key guy hired by his uncle Bassam (Nadim Sawalha, "Captain Abu Raed") whose one little lie catches him in the middle of one of the modern era's longest running political conflicts. It all begins when Salam, watching a scene being shot, objects to the word 'explosive' being used to describe a woman's looks, a situation he makes the fatal error of asking a female Israeli border guard about the following day. This is what leads him into the office of Assi, whose wife, it turns out, is a huge fan of 'Tel Aviv on Fire.' Assi has a request - he wants Manal to end up with Yehuda, not 'that terrorist' Marwan - and Assi has no problem writing the scenes for him. Salam presents the idea and the pages and is deemed having 'a good ear for Israeli voices' and promoted to write Zehudi's dialogue (his counterpart, Nabil (Amer Hlehel), is amusingly non-committal about everything). There's only one problem - the show's advertisers are not happy with the direction the soap is taking, sending Salam zigging and zagging when he's not consulting with his mom on story and wrestling with screenwriting software. Meanwhile, Assi, who arrives home to find himself a physical obstacle to three women absorbed in their soap, finds his stock rising when he mentions he 'knows the writer.' While "Tel Aviv on Fire" eventually gets too over stuffed for its own good, bogging down before springing back for its denouement, it is a thoroughly entertaining 'bumbler in over his head' comedy. We root for Salam throughout, whether he's trying to win back Mariam (Maisa Abd Elhadi, "The Reports on Sarah and Saleem") in his low key way or wrestling with each new demand of Assi's. Nashif and Biton work wonderfully together, one cracking scene showing them writing jointly in unison, only to pivot and end up at odds. Zoabi actually does write well for his Israeli, giving the man depth as Assi explains how to recognize true love. Zoabi glides into and out of his soap opera, visually distinctive from his vérité reality with its garish lighting and bolder colors. Music by André Dziezuk is simple, distinctive yet non-intrusive. Best of all are the running gags he weaves throughout concerning Israelis' inability to recognize good hummus to all manner of 'explosive' material. Grade:

Palestinian-born director and co-writer Sameh Zoabi (with Dan Kleinman) does something that is, in a word, unique. He creates a comedy centered in the strife stricken Israeli West Bank and builds a cross culture story that has an honest, feel-good vibe. And, it is wryly funny. Salam, through his understanding of Hebrew, helps bring nuance to the set of “TAoF” as he corrects the head writer and ingratiates himself to the show’s star, Tala (Lubna Azabal). His run in with Assi, whose wife is a big fan of the show, is a catalyst that will propel Salem from lowly PA to co-writer for the show and a hero in the eyes of his crush and, hopefully, girlfriend, Miriam (Maisa Abd Elhadi). Kais Nashif gives a deadpan delivery to his Salem, who is in wonder over his good fortune, as he struggles to fulfill his new writing duties. He makes a pact with the “devil,” in the guise of Captain Assi, who sees his role in Salem’s career as the means to show his wife and her friends (fans, of course, of “TAoF”), his influence on their favorite soap opera. The filmmakers do not just make light in this multi-layered comedy. The soap opera demonstrates the duality of life in the West Bank, a place that is both Israeli and Palestinian, but a place of tensions. That “Tel Aviv on Fire” is able to inject honest and funny humor, and a bipartisan viewpoint, is refreshing.