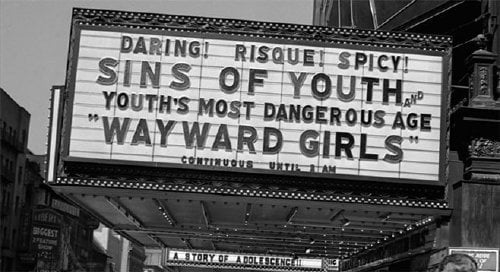 Up until the 20th century, there was a sharply defined line between child and adult. In 1904, 12 year old children were forced to work, as paid slaves, for up to 72 hours a week – often under life-threatening conditions. Documentary filmmaker Matt Wolf gathers archival film, photographs, memoires and memories to show the birth of the modern phenomenon that will shake up the world in “Teenage.”

Before WWII, people went from being children to adults. The industrial revolution brought a spotlight to the slave conditions many kids worked under, resulting in child labor laws. Finally, kids got to go to school and even have some fun. Working with Jon Savage, the author of 'England's Dreaming' and 'Teenage,' director Matt Wolf ("Joy Division") has fashioned a collage essay about the events leading up to 1945, when the New York Times published 'A Teen-Age Bill of Rights.' There's a tremendous amount of unusual archival footage documenting such movements as the Bright Young Things of England's flapper era, where Brenda Dean Paul became the first notorious junkie (a forerunner to celebrities famous for nothing but their lifestyles) and Tommy Scheel and his Hamburg Swingers, condemned by the Nazis. There are flappers, Sub-Debs, and Jitterbugs. But while Wolf's text acknowledges that the entire teenage concept was American in invention, don't expect to hear the term bobby soxer. While of interest, Wolf's decision to focus on a Bright Young Thing, a Hitler Youth, Scheel's Swingers and black boy scout Warren Wall mixing recreations with real footage while Jena Malone, Ben Whishaw, Julia Hummer and Jessie Usher read diary entries is odd and often disorienting. There is rare history here, but Wolf pulls the plug just when the fully realized American teenager is about to explode onto the cultural scene. The fifties are given scant coverage, with a montage taking us in a minute from 60's protests to 80's punks. There is Sinatra but no Beatles, Europe and the U.S., but no Asia or Africa. The film's 78 minute running time feels long while the timeline covered feels short. Granted, the film's title is taken from Savage's book, but for a documentary which concludes that the teenager is all about the future, it spends too much of its time covering WWII. "Teenage" is a niche historical document.

Our modern culture has recognized, like it or not, that there is an age in life that falls between childhood and adulthood – teenage. Based on the 2007 book by Jon Savage, Teenage: The Prehistory of Youth Culture 1875-1945, Matt Wolf’s documentary takes us from the early days of child labor laws through the decades of the first half of the 20th century when the post-adolescent period began to grow, develop and, eventually, become an economic force in the world. Having grown up in the 1950s and a teen in the 60s, I have, naively, taken it for granted that teenagers always existed. That thought is put to rest with the insightful, well researched document of how this significant sub-culture came to be. It is a rocky road traveled following the loss of a generation of our youth because of World War I. The 1920s, at least in America, heralded the true dawn of the teenager with the rise of flappers, jalopies, jitterbug and swing. Despite such minor problems as The Great Depression and World War II, once the concept of “teenage” (and all it entails) became firmly established in our society, it was here to stay. Matt Wolf shows us a less cynical time as kids find themselves in the music of the age – jazz – and how it led to their radicalization and, sometimes, rebellion. Radios and records changed the way teens listened to music, leading to the first super stars in the music world. This is exemplified in a nostalgic and amusing bit with a very young Frank Sinatra singing before a screaming and swooning femme audience in the 1930s. “Teenage” does what a good documentary should: educate and entertain. It also aroused my curiosity with the brief mention of the 1945 New York Times magazine article A ‘Teen-Age Bill of Rights, prompting me to find and read it. Ah, to be a teenager again.