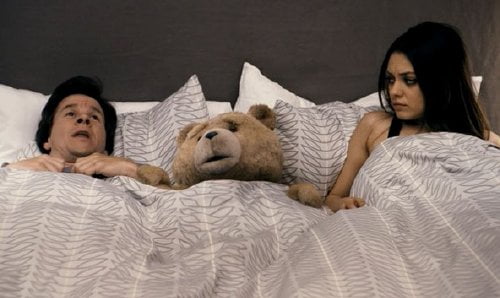 In 1985, none of the kids in 8 year-old John's (Bretton Manley) neighborhood wanted to play with him, so when he gets a large teddy bear for Christmas he wishes it were alive so they could be best friends. Thanks to a falling star, John and his parents are astonished when the bear begins to walk and talk but thirty years later Lori (Mila Kunis, TV's 'Family Guy'), John Bennett's (Mark Wahlberg) girlfriend of four years, thinks his lack of ambition and responsibility can all be attributed to his hanging out with "Ted."

Cowriter (with 'Family Guys'' Alec Sulkin & Wellesley Wild)/director Seth MacFarlane makes his leap to the big screen with a Boston set man and his teddy bear buddy comedy that is both hilariously un-PC and emotionally satisfying. This may be the ultimate arrested man-boy movie, with MacFarlane mining the comedic chops of Wahlberg, the Boston accent, "Flash Gordon," Tom Skerritt, "Octopussy" and most of all, the well worn stuffed bear which he voices. You will believe a teddy bear is alive. The film begins with the deadpan narration of Patrick Stewart as we observe the cruelty of kids. John and Ted's early friendship is quickly painted with a series of stills that sees the two reenacting the "E.T." bike ride, Ted dressed as Yoda for a "Star Wars" revival (at the Somerville Theater, home of the Independent Film Festival of Boston) and Ted pretending to front an animatronic animal band to scare kids. Ted's early fame (he bested Johnny Carson on the Tonight Show) fades, but he still gets the occasional request for a picture. This happens a lot in the Boston Public Gardens, where he and John often go to smoke some weed. John and Ted live with Lori, who not only puts up with their constant bong passing and Ted's arrival in their bed every time it thunders, but with Ted's penchant for partying with hookers when she and John are out. Lori lays down the law, but even after Ted does get his own apartment over a Chinese restaurant, John lies to keep seeing his 'Thunder Buddy.' Everything comes to a head when John sneaks out of Lori's work party at the home of her interested boss Rex (Joel McHale, TV's 'Community') because his and Ted's idol, "Flash Gordon" star Sam J. Jones, has shown up at a bash at Ted's. Then there's the creepy guy, Donny (Giovanni Ribisi, Wahlberg's "Contraband" costar), who's been stalking Ted because his weird son Robert (Aedin Mincks, the dark side of 'Bad Santa's' Kid) wants him. MacFarlane has stuffed this film with so many crazy ideas it's a wonder its seams don't split, but he's totally in control. Comedy is hard, but here it seems easy, perhaps because the director has used a lot of the talent behind his TV show both behind and in front of the camera. At Ted's job at Liberty Rent-a-Car, his boss Thomas (Matt Walsh, HBO's 'Veep') is the quintessential coaster who thinks he's made it with a 38K salary and thin connection to Tom Skerritt. Ted's coworker Guy (Patrick Warburton, TV's 'Family Guy') recounts weird evenings that suggest he might be gay (the payoff involves an uncredited surprise). Like 'Family Guy,' the humor is often racist and crude, but it's done with such obvious self awareness only the easily offended should be. Highlights include Ted's highly sexualized flirtation with coworking checkout girl Tami-Lynn (Jessica Barth), a ticked off neighbor (Robert Wu) who complains about Ted's party and whose name - Ming - catches the attention of a coked out Jones, a Norah Jones (good sport!) concert at the Hatch Shell and an all out hotel room brawl between Wahlberg and Ted. Wahlberg is just incredible acting with something that is not there (Ted was added in post) and he uses his sweet lunkhead charm to great effect - Kunis's Lori might be slumming but you'll understand why she sticks around. MacFarlane plums the Boston accent in a way that declaws the foul-mouthed Ted - the bear could be a regular at Cheers if it were R-rated. The film's production makes great use of Boston landmarks like the swan boats and Fenway Park, but it reaches great heights with the Chelsea home of Donny under the looming Tobin bridge - MacFarlane's team has made this home as dreadful as the one in "Without a Trace" and Ribisi's dancing to Tiffany's 'I Think We're Alone Now' video will make your blood curdle. The only thing MacFarlane didn't seem to think of was a marketing tie-in. Ted's written angry letters to Hasbro about a missing piece of anatomy - consumers might do the same to get their own Ted.