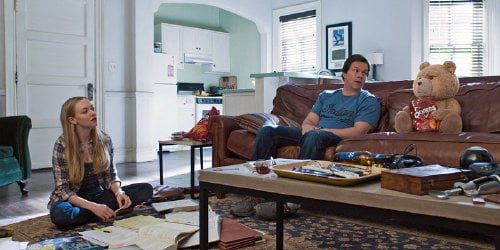 After a year of marriage, Ted (voice of Seth MacFarlane) decides a baby is the answer to his and Tami-Lynn's (Jessica Barth) problems. But after hilarious attempts to find a sperm donor prove all for nought, the couple open a can of worms by applying for adoption, discovering that the Government doesn't recognize Ted as a person. After losing his job and having his marriage annulled, Ted fights back, taking his case to court with the help of best buddy John (Mark Wahlberg) and fledgling attorney Samantha L. Jackson (Amanda Seyfried) in "Ted 2."

Like most sequels, cowriter (with "Ted's" Alec Sulkin &Wellesley Wild)/director Seth MacFarlane's "Ted 2" isn't as good as the original, but it also doesn't retread old ground as much as most follow-ups do either. The plot here is largely incidental and unfortunately, Donny's (Giovanni Ribisi) back to diminishing returns, but MacFarlane's irreverent humor is intact and there are plenty of laughs to be had - even plenty that haven't been spoiled by the film's trailer. After flashback to Ted's Sam Jones's ("Flash Gordon") officiated wedding, MacFarlane gives us a 'Family Guy'/Busby Berkeley-style opening credit wedding cake sequence before catapulting us a year ahead where Ted, wearing a wife beater, is complaining about Tami-Lynn's spending. It's like an R-rated Bahstan 'Honeymooners.' While the plot drives the sperm donor hijinx (an attempt to 'milk' Patriots QB Tom Brady, a Boston Police code 317, and MacFarlane upping the ante on the Farrellys' "There's Something About Mary" with havoc at a sperm bank), it's a dead weight on the last two acts. The movie's final third involves a trip to NYC and MacFarlane misses an opportunity to riff on Boston's inferiority complex with the Big Apple or any of the two city's notorious sports rivalries. Instead we get a bunch of lame gags at a ComicCon, a setting where the filmmakers try (and fail) to recreate the insanity of the first film's party at Ted's, a veritable Flash Gordon riot. But MacFarlane keeps spinning silly non sequiturs that keep things amusing. "Ted 2" is all about it's running jokes, from Sam L. Jackson's pop culture deficiency to an aptly named weed hybrid and penis bongs. In his brokenhearted post-divorce daze, John's become hooked on online porn, which not only sets off a great Google gag but sends him and his Thunder Buddy on a scuba trip into Boston's 'haabah.' The film features a number of amusing cameos from the likes of Jay Leno and Liam Neeson, but many supporting players, like John Carroll Lynch as Hasbro's CEO and John Slattery as Massachusett's prosecuting attorney don't allow the actors to have fun. Patrick Warburton returns with Michael Dorn ('Star Trek: Deep Space Nine') as his romantic partner for cruel humor that isn't funny (some may laugh seeing him outfitted as The Tick). Morgan Freeman is around to lend some moral weight as a civil rights attorney. "A Million Ways to Die in the West" survivor Seyfried is much better served here as the pot-smoking romantic interest, but this series succeeds on the incredible chemistry between Wahlberg and the bear-who-isn't-really-there. If MacFarlane wants to go for a third, though, (and he's left open the possibility for more than one talking Teddy), he should streamline his plotting and just let his characters do the heavy lifting. Grade: