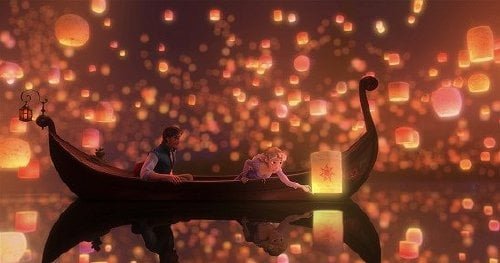 In a faraway kingdom ruled by a beloved King and Queen there grew a magic sunflower on a cliff over the sea. It was kept hidden by an old crone, Mother Gothel (voice of Tony winner Donna Murphy, "World Trade Center"), who used it to retain her youth. But the day the Queen went into labor with her first child, her complications were so dire the kingdom guards went out in search for the flower and found it. The Queen gave birth to a baby girl, Rapunzel, born with flowing blond locks. Knowing those locked contained the flower's magic, Mother Gothel kidnapped the princess and kept her locked away in a tower, but when the girl's eighteenth birthday approached a surprise run in with a fleeing thief would make everyone's affairs "Tangled."

Screenwriter Dan Fogelman keeps the basics of the Grimm fairy tale and tosses out everything else, producing a formula Disney film with hints of prior ones. Flynn Ryder and the company he keeps bear a lot of resemblance to "Beauty and the Beast's" Gaston while Mother Gothel is much like Snow White's evil Queen and of course there are animal side kicks and plenty of generic songs by Alan Menken ("Home on the Range," "Enchanted"). The Kingdom looks like Disney's logo and the ships in its harbor are straight out of "Peter Pan." But even though "Tangled" feels like more of the same from Disney, it still boasts great animation, humor and charm. The 3D treatment is a nice gloss, not distracting as in so many other 3D films, but not really necessary either. Rapunzel (voice of Mandy Moore), who uses her never-shorn hair as a drawbridge for her 'mother' when she's not using it like a lasso, spends her days reading, painting murals on the walls and crocheting. Her best friend is Pascal, a chameleon (the animals in "Tangled" do not talk). Every year on her birthday, she's enchanted by the lights she sees rising in the distance, lights Gothel tells her are stars but which she is sure are not. Back in the kingdom, Rapunzel's crown is guarded and on her birthday everyone follows the King and Queen in sending up a lighted lantern, hoping for the missing princess's return. One day, some thieves, the dashing Flynn Ryder (voice of Zachary Levi, TV's 'Chuck') and brutish Stabbington Brothers (voice of Ron Perlman), manage to steal the princess's crown. They're chased out of the kingdom by the guards, and become separated. Ryder has the crown in his satchel and is hunted down by the lead guard's steed Maximus. Cutting through a hedge, Ryder finds the tower and climbs his way up. He's promptly bonked on the head with a cast iron frying pan by Rapunzel. After her pleas to find the source of the lights for her eighteenth birthday were strongly refused by mother, Rapunzel asked for some paints that required a three day journey, debating that she might rebel in mother's absence. Now she makes a deal with the thief that she'll give him back his booty if he escorts her to the kingdom, a place he isn't exactly welcome. Fogelman has some nice running threads woven throughout his film involving frying pans, ceramic unicorns, a old drunken Cupid and a mime, but it's Max, the horse, who steals the show. The CGI used here is, of course, a different style of animation than Disney's 2D princess tales (the title, "Tangled," was used purposely to disassociate the story from its princess line and draw the boys in), resulting in those plasticine looking characters with huge eyes, but Maximus is a gem, beautifully animated. The passive-aggressive Mother Gothel is also more exotic than the typical Disney character, and Murphy brings her to vocal life. Moore and Levi are well cast as the leads, her singing voice called into frequent action, his international exploits on "Chuck" providing experience for the right amount of roué in Ryder. With "Tangled" I was expecting Disney to take a stab at "Shrek's" style of pop cultural humor, and am glad to see that that is not the case. But somehow in their move from hand-drawn princess tales to newer technology, the film, however enjoyable, seems warmed over. Last year's "The Princess and the Frog" had more personality, even while it hewed within the Disney framework.