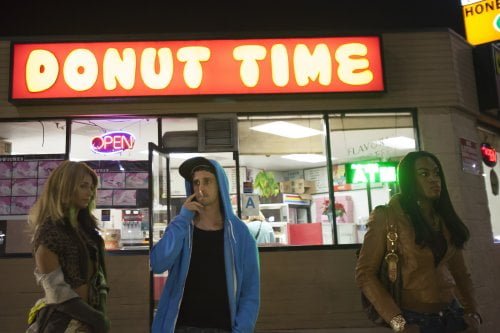 Sin-Dee (Kitana Kiki Rodriguez) is just out from a 28 day stint in jail. She hooks up with her best girl friend, Alexandra (Mya Taylor), only to find out her pimp, Chester (James Ransone), has been cheating on her – with a woman! Furious at his betrayal, Sin-Dee begins the mission to find her man and set him straight in “Tangerine.”

It's Christmas Eve and transgender prostitute Sin-Dee (Kitana Kiki Rodriguez) is splurging on a donut with her best friend Alexandra (newcomer Mya Taylor) at L.A.'s Donut Time. Sin-Dee's just finished a 28 day incarceration and is eager to hook up with her boyfriend Chester (James Ransone, "Sinister") when Alexandra lets slip that he's cheated. Even worse, he's cheated with a cisgender woman. Sin-Dee's apoplectic and Alexandra promises to help her track them down only if there's no drama in "Tangerine." Here's a rarity - a Sundance hit that lives up to its accolades. Most notable for having been shot with 3 iPhone5S's (director of photography Radium Cheung ("Starlet") added prototype clip-on anamorphic lenses and Steadicam mounts), the film is really beautiful to look at, one dusk shot scene so color saturated it reminded me of how Michael Mann revolutionized digital photography with his rich black "Collateral" nights. Cowriter (with Chris Bergoch)/editor/director Sean Baker ("Starlet") chose the method to help his inexperienced leads, both of whom are terrific, but none of this would matter if he hadn't come up with a highly entertaining story that is equal parts gritty street realism and a moving friendship tale all wrapped up with plenty of laughs. This one will go onto my rotation of unconventional Christmas movies. As Sin-Dee canvases the Santa Monica and Highland neighborhood looking for Chester and the woman whose name begins with 'D' while Alexandra takes every opportunity to hand out flyers for her show that night at 7, Baker crosscuts to the adventures of Armenian cabbie Razmik (Karren Karagulian, "Starlet") as he ferries around pink-haired Asians snapping Hello Kitty clad iPad selfies, vomiting drunks and a Cherokee (Clu Gulager, TV's 'The Virginian,' "Feast") who explains the origin of his feminine name. We get a hint about Razmik's connection to our girls when he picks up beautiful newcomer Selena (Ana Foxx), throwing her out of his cab when he realizes she doesn't have a dick. He finds one of his regulars, Alexandra, for an assignation and is thrilled to hear his favorite, Sin-Dee, is back on the streets. Sin-Dee finds the woman she's been hunting at Madam Jillian's (Chelcie Lynn) motel bordello, abucting Dinah (Mickey O’Hagan, "Starlet") for a showdown with Chester as Alexandra frets outside her gig's club, empty at 7:08 p.m. As she finally starts her show (a lovely, quiet rendition of 'Toyland'), Razmik's impatience with his family's Christmas celebration is evident and he announces to his mother-in-law's (Alla Tumanian) indignation that he has to go back out to work. Donut Time's owner (a hilariously fierce Shih-Ching Tsou) may have seen a lot in her time, but what's about to go down in her shop is one for the ages. Baker's film has genuine attitude, setting its stride with DJ Lightup and DJ Heemie's 'Team Gotti Anthem,' reaching a crescendo with Beethoven's Coriolan Overture as Sin-Dee waits for a bus. The film glows, from its beacon-like Donut Time to the water beads dancing up a windshield in a car wash or the Christmas lights twinkling behind contemplative characters. His story examines loyalty, betrayals and compromise within the melancholy holiday season, one which finds Razmik's excited family dog ignored in the hubbub and Dinah with no room at the inn. Ransone so epitomizes the pimp's MO we believe him when he re-woos Sin-Dee, but the ties that really bind are between Rodriguez and Taylor, whose last scene in a laundromat is the essence of the Christmas spirit. Grade:

Director and co-writer Sean Baker (with Chris Bergoch) has created a charming and funny transgender tale of revenge in LA on Christmas Eve – shot on three modified IPhone 5s. When Sin-Dee finds out about Chester’s infidelity with Dinah (Mickey O’Hagen), she tears around town, going from one of Chester’s haunts to the next. At one, she finds Dinah and grabs the bewildered girl, dragging her, literally, on Sin-Dee’s pursuit for vengeance. “Tangerine” is about Sin-Dee’s revenge but is also an odyssey for the young transvestite as she traverses LA on her Christmas quest. It is a good character study with an assured performance by Kitana Rodriguez in her first screen role. The other non-actors and unknown thespians in the cast do a good job giving funny and natural performances. Rodriguez and helmer Baker should collaborate again and soon.