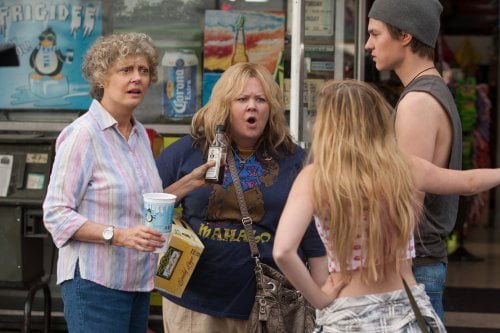 With her job lost, her husband cheating, her car on fire and no financial resources, a woman's desire to quit her town leads her to her unorthodox party animal of a grandmother, Pearl (Susan Sarandon), anxious to escape her daughter's plan to move her to a senior living facility. But a road trip in Pearl's car only brings more trouble for "Tammy."

Cowriter (with Melissa McCarthy)/director Ben Falcone makes his directorial debut with a vehicle for his wife inspired by a dream he had about her and her grandmother on a road trip. While the couple try to invest their comedy with deeper subtext about understanding between women a generation apart who have little sympathy for each other at the picture's beginning, there is something distasteful about their attempts to gain sympathy for Tammy by defining her as a pathetic, undereducated loser whose on the road romance is initiated by pity. Casting Sarandon, an iconic movie road tripper ("Thelma and Louise") is a bit of a stunt, but the actress, wearing a curly gray wig and prosthetic cankles, is game. The film opens with its best bit, an improvisation by McCarthy after she hits the deer which totals her beater. When she finally makes it to her job at Topper Jack's fast food chain, she's a mess and she's fired on the spot by her unsympathetic boss Keith Morgan (director Falcone, "Bridesmaids"). Tammy (McCarthy) burns her bridges in a way many have dreamt of, but few carry through with. After plodding home, Tammy finds husband Greg (Nat Faxon, "The Way Way Back") wining and dining neighbor Missi (Toni Collette in a thankless role). She returns to the nest - two doors down - but mom Deb (Allison Janney) calls her daughter a quitter, applying tough love. There's no love lost between Tammy and her grandma, but Pearl's $6,700 convinces her to start fresh with a relic of the sex, drugs and rock 'n roll era armed with a cold six-pack and a pint of whiskey. Drunken exploits, jet ski crashes and buying booze for minors eventually finds the two in jail, their funds depleted. When Tammy's released and informed her grandma's bail is $1,600 more than they have left, she decides to hit back at an outlet of her former employer, a stunt that makes the news with some very traceable descriptions. Pearl calls her successful cousin Lenore (Kathy Bates), who helps get rid of the evidence, but when Pearl gets blotto at Lenore and Susanne's (Sandra Oh, TV's 'Grey's Anatomy') lesbian Fourth of July bash, harsh truths are voiced in a very public way. Can the newfound relationship be saved? It is admirable that McCarthy and Falcone try to push an agenda that gives the young perspective on their elders (and vice versa), but except for a (very) few funny set pieces, the film's pretty flat. There are queasy attempts at sexual humor (pity Gary Cole ("Office Space"), cast as an alcoholic horndog with a dubious, underdeveloped back story) and jokes at the expense of Tammy's ignorance (although her 'cultural' appreciation for what is clearly a piece of kitsch leads into a revelation from grannie and an amusing 'Midnight Rider' duet). As Bobby, the son of Pearl's Blue Post BBQ conquest (Cole), Mark Duplass ("Your Sister's Sister") wears the same expression whether he's being sexually molested or pitching woo. The romance with Tammy makes little sense, their only connection being the caretakers of inappropriate seniors. Sarah Baker, who recently got a lot of press for her 'fat girl' speech on TV's 'Louie,' underplays nicely as Tammy's stickup victim. Dan Aykroyd makes a late appearance as Tammy's dad. Melissa McCarthy is inarguably talented, but her and Falcone's best intentions get lost within yet another portrayal of an overly aggressive yet pathetic character. McCarthy needs to overhaul her schtick. If the number of audience 'awws' at the promotional screening I attended are any indication, though, "Tammy's" bid for sympathy may win over many.