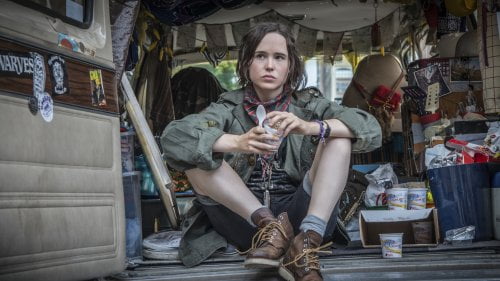 Tallulah (Ellen Paige) is a homeless but free-spirited young woman living out of her van and relying on dumpster diving for food. One day, as she skulks a hotels floors feeding off of room service discards, Lu is mistaken for the housekeeping by one of the tenants, Carolyn (Tammy Blanchard). The ditzy Hollywood housewife hires Lu on the spot to baby sit her toddler, Madison. It is a bad decision and things will soon get out of control for “Tallulah.”

After her boyfriend, Nico (Evan Jonigkeit, "Bone Tomahawk"), rejects her life of van living and dumpster diving, Lu (Ellen Page) drives into New York City, her first stop an unsuccessful financial appeal to Nico's mother Margo (Allison Janney). Scrounging food from room service trays in a hotel hallway, she's mistaken for an employee by Carolyn (Tammy Blanchard, "The Invitation"), a married woman who begs her to babysit while she meets another man. But when Carolyn returns drunk and passes out, Lu impulsively takes her toddler Madison (Evangeline & Liliana Ellis) and returns to Margo, who assumes the child belongs to Nico and "Tallulah." Writer/director Sian Heder (writer, TV's 'Orange Is the New Black') may have named her film "Tallulah," but this is really a portrait of three women, all struggling with the responsibility of caring for others. Ellen Page and her "Juno" costar Janney support each other with prickliness and warmth as two women of diametric circumstances coming together over the welfare of a child, but it is Blanchard who really soars here, creating a character easy to judge at the onset, then flipping our notions as she reveals layers of insecurity and desperation. Expanding on her short film "Mother," Heder spun this tale from her own experiences babysitting for wealthy hotel patrons and if the circumstances seem ripped from a headline, it's much to her credit that everyone's actions are character-based and understandable. She may occasionally hit the nail a little too perfectly on the head, such as when Margo finds her pet turtle dead just before Lu's reappearance, but these characters are real people. Lu's back story is hinted at, her stubborn independence and rejection of commitments a reaction to something in her past. Margo's anxiety springs from a son who's run away and a husband, Stephen (John Benjamin Hickey, TV's 'Manhattan'), who's left her for another man, Andreas (Zachary Quinto, "Star Trek"). Lu's homelessness contrasts with Margo's life as an academic living in a serviced Manhattan building guarded by the considerate Manuel (Felix Solas, TV's 'The Good Wife') who keeps trying to connect with Margo. Carolyn is a trophy wife on the other side of her best years going through a desirability crisis, feeling locked in by a child she's unprepared to care for. As Lu and Margo bond over Madison, we get deeper insights into Carolyn, hysterical over her missing child. As the cop on the case, Detective Kinnie (Uzo Aduba, TV's 'Orange Is the New Black') acts as moderator. Page combines street smarts with naivety naturally while Janney establishes a woman with career success but emotional distress. Blanchard takes things to the edge without tipping across, a tarty party girl turned maternal hysteric. "Tallulah" succeeds with its three flawed heroines all doing the wrong things for their own right reasons and Heder's compassionate film tugs them all into the light. Grade:

The film begins with Lu and her boyfriend, Nico (Evan Jonigkeit), having a falling out. He wants to get married, settle down and have a baby. Not so for Lu and they part ways. She continues her hobo existence and makes a plan to hit up Nico’s mother, Margo (Allison Janney), for some cash. The plan does not go well when Margo slams the door in her face. This brings us to the hotel and Carolyn. Her mistaken identity of Lu and rush out the door leaves the baby in her arms. Lu stands there, wondering what the hell she got herself into. Lu finds she has a distinctive knack for taking care of a child and the two settle in until mom gets home. She does, eventually, but is so drunk and passes out on the bed. Fearing for little Madison, Lu makes the snap decision to take the baby away from the irresponsible Carolyn. This, as one would guess, is kidnapping. When the weight of what she has done begins to dawn on her, Lu takes Madison to the only one who can help – Margo – and tells her that she is Nico’s baby. The new “grandma” agrees to take them in “for one night.” This is where “Tallulah” takes its real tone with Lu trying to do the right thing while the shattered Carolyn calls in the cops to find her baby. This is true modern femme fable with the lives of three women thrown together after a single rash decision by Lu. The stars of “Tallulah” are all fully developed characters with Ellen Paige giving a good performance as a young woman trying to live her own life without ties. Allison Janney, who was with Paige in “Juno (2007),” is effective as Margo, lending maturity and responsibility to a very unstable situation. Best in the film, though, is the remarkably complex character of Carolyn. Tammy Blanchard, when we first meet the obviously over-strung mother, is on her way out when she begs Lu to help her out. Lu’s reluctant agreement is just the start of Blanchard’s tour-de-force performance. Yes, she is a very troubled person, for good reason, but the actress develops a nuanced, sympathetic character by the end of “Tallulah.” I will remember Blanchard at year’s end.