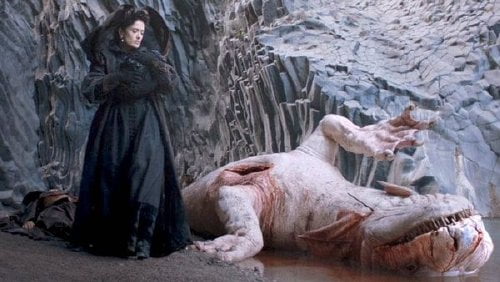 Three stories of kings and queens, sea monsters, an ogre and a giant flea are linked together in a fairy tale land that out grims the Grimm Brothers in “Tale of Tales.”

The Queen of Longtrellis (Salma Hayek) wishes for a baby above all else, the King of Highhills (Toby Jones) becomes obsessed with a flea and Dora (Hayley Carmichael) deceives the lustful King of Strongcliff (Vincent Cassel), all three thoughtlessly dooming the ones who love them in cowriter (with Edoardo Albinati and "Gomorrah's" Ugo Chiti & Massimo Gaudioso)/director Matteo Garrone's ("Gomorrah ," "Reality") adaptation of Giambattista Basile's "Tale of Tales." After weaving strands of varying levels of corruption to illustrate the societal breakdown wrought by the mob in "Gomorrah," then focusing on one man to skewer celebrity culture in "Reality," Matteo Garrone turns to loosely overlapping seventeenth century fairy tales for his latest morality play. But while there is a theme threading through "Tale of Tales," these dark and adult stories can and should be enjoyed for their lush, baroque imagination tinged with moments of whimsy and horror. Neapolitan Basile's 'Pentamerone,' a collection of fifty children's stories, was the precursor to many fairy tales later ascribed to the Grimm Brothers and Hans Christian Anderson. Curiously, Garrone chose to make this his English language debut, but the film is European in its sensibility, from its otherworldly Italian locations to Massimo Cantini Parrini's exquisite period costumes. Many of the film's mises en scène could have been lifted from the walls of a European national art gallery. Entertainment is a subtext throughout the film, beginning with the court jesters trying to amuse Longtrellis's King (a miscast John C. Reilly) and Queen. When one of them is revealed to be heavily pregnant, the Queen rushes from the room, her King following to comfort her. A ghoulish Necromancer (Franco Pistoni) promises her a child if a sea monster is hunted down, its heart cooked by a virgin, then eaten. The Queen barely recognizes her husband's death in achieving her quest, tackling her bloody meal with grisly relish, but the Albino prince, Elias (Christian Lees), who results only wishes to be with his 'twin' Jonah (Jonah Lees), the son of the servant (Laura Pizzirani, "Black Souls") impregnated by preparing his mother's meal. The Highhills King is enjoying a concert put on by his daughter, Princess Violet (Bebe Cave), when he's distracted by a flea. Keeping the creature in a velvet-lined gilt box, he trains it to drive a coach and feeds it Violet's undercooked steak until it is the size of a small dog. When it dies, he is distraught, but uses its hide as the solution to the question that will win Violet's hand. One by one, handsome suitors are turned away, until an Ogre (Guillaume Delaunay, "Victor Frankenstein") determines it belongs to a flea. Violet's swept away to a cave littered with bones until she catches the attention of a circus performer (Alba Rohrwacher, "The Wonders") whose family uses the tools of their trade to aid in her escape. When the hedonistic King of Strongcliff hear's a peasant's song, he assumes she is a fair maiden, but Dora and her sister Imma (Shirley Henderson) are old crones. Dora tricks the King into believing she's a beauty, but when he uncovers the old hag in his bedchamber, he has her thrown out his window. Caught in some trees, Dora is found by a woman who bewitches her, restoring her youth. The King is once again enchanted, marrying her (Stacy Martin, "Nymphomaniac's" young Joe), but when she denies her sister at the wedding, Imma goes to horrific lengths to regain her place in her sister's life. The film's old fashioned effects add to its magic, a scene of a King in Jules Vernesque diving suit facing an underwater dragon amusingly bizarre. Each story is grounded by a distinct castle, Strongcliff's quite literal. The film's horrors are too intense for younger children, yet entirely in keeping with Garrone's richly realized world. Grade:

The film, directed by Matteo Garrone (“Gamorrah”), is loosely based on the early 17th century fairy tale works by Giambattista Basile (Tale of Tales, or Entertainment for Little Ones.” (Be warned: “Tale of Tales” is definitely NOT for little ones.) As said, this is the story of kings and queens and they are diverse, indeed. One story is about the King and Queen of Longtrellis (John C. Reilly and Salma Hayek). The queen is bitter over her inability to get pregnant until a mysterious necromancer (Franco Pistoni) arrives with the promise of offspring – at a price. The king must descend into the depths of the ocean, find a giant sea serpent and cut out its heart. The heart must be cooked by a virgin before the queen eats it. Good plan, but things do not go as designed with the result being the birth of twin sons of different mothers, Elias (Christian Lees) and Jonah (Jonah Lees). Story two has the King of Strongcliff (Vincent Cassel) becoming obsessed from afar when he hears what he thinks is a beautiful young maiden singing a song. Instead, the woman and her sister are two old crones. Sight unseen, he proposes marriage when she offers him the contact of a single finger. Things do not go well when the king finally meets his obsession face to face. Lastly, we have the King of Highhills (Toby Jones) and his daughter, Violet (Bebe Cave), who wants only to travel and have adventure. He, on the other hand, becomes obsessed with a flea, which he nurtures to enormous proportions and trains. He plans to marry off his daughter and begins the search for a suitable suitor who can answer a mystery question. Violet is less than pleased when an ogre (Guillaume Delaunay) answers the question correctly. (See “Tale of Tales” if you want to know the question and answer.) While watching “Tale of Tales,” the bizarre and dark (and oft darkly humorous, though not exactly funny ha-ha) holds your attention. Sequences like the King of Longtrellis undersea battle with the sea serpent are a wonder and each story has its own focus with all three joining, loosely, in the end. There is nothing special on the acting side of things, probably because each story only has a portion of the film’s 133 minute runtime. Director Garrone marshals his very large cast in the Italian countryside, giving the “Tale of Tales” the medieval look the story requires. Cast, costume and sets all fit the period and belie, by American standards, the relatively low budget (about 12 million Euros). Again, it is definitely not for the little ones. Older kids and beyond should get it.