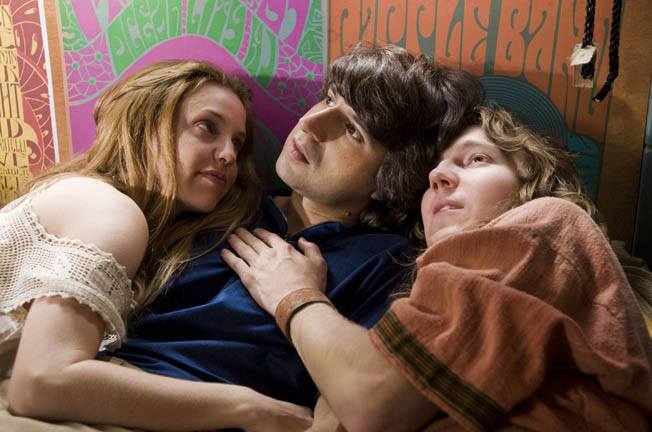 In 1969, Elliot Teichberg (nerd humorist Demetri Martin, "The Rocker," "Paper Heart," looking slightly stunned throughout) is still leaving his newly found New York City adult life behind every summer to help his Russian Jewish immigrant parents Jake (Henry Goodman, "Colour Me Kubrick: A True...ish Story") and Sonia (Imelda Staunton, "Vera Drake," "Harry Potter and the Order of the Phoenix") run their ramshackle Catskills motel. Newly elected the president of the Bethel Chamber of Commerce, Elliot makes it an order of business to procure a permit for the musical festival he hopes to make an annual event. When he reads that a neighboring town has thrown out the promoters of an event so big it features Janis Joplin, Elliot finds himself "Taking Woodstock." Director Ang Lee ("Brokeback Mountain") and producing/writing partner James Schamus ("Lust, Caution") have adapted Elliot Tiber's book as a tapestry of a time, with Woodstock a psychedelic backdrop to the story of one young man liberating himself from a parental stranglehold. Those seeking a film that tells the story of Woodstock or the artists who performed there should look elsewhere, but Elliot's story does give one the flavor of just what it must have been like to take the journey forty years ago. Lee presents his hero's antagonist right at the onset. Sonia Teichberg is a matriarch in glasses, sagging housecoat and knee-hi's who must be the most unwelcoming innkeeper in the annals of the hospitality industry. After fending off the demand for a refund from a 'guest' who hasn't even yet moved into his room, Sonia accompanies Elliot to the local bank where Elliot begs for an extension on their loan, citing the tourism he hopes to bring to the area and the El Monaco 'resort's' new pool. The Teichbergs are given one season to become solvent. After Elliot contacts Woodstock Ventures, his prayers are answered - from the heavens above descends a helicopter bearing childhood friend Michael Lang (Jonathan Groff, 2007 Tony nominee for "Spring Awakening"), one of the event's creators. The Teichbergs' swampy land is rejected, but Elliot recalls the rolling fields of dairy farmer Max Yasgur (Eugene Levy, "American Pie," "For Your Consideration") and a deal is made with El Monaco bought out for the season as headquarters. Lee and Schamus establish the rhythm of small town, rural life before the onslaught. Elliot presides over a Chamber of Commerce meeting where member ideas include building a monorail from the city and where real business is devoted to stamping permits. Elliot intends to bring real, live music to his 'arts' festival in its second year - we learn the first was a lovely event consisting of listening to records played on a lawn. All the locals eat at Slattery's where Dave (Adam LeFevre, "Twelve and Holding," "Adam") cooks up your usual. Then the filmmakers explode this sleepy hamlet with helicopters bearing hippies and media reports of attendance figures, each more outrageous than the last (and they underestimated). The townspeople turn on Elliot, but Max is right in that they all look for ways to capitalize. And while "Taking Woodstock" is a bit of a shaggy dog story, Lee uses a subtle build to show how 'three days of peace, love and music' transformed a rural farming community. It begins with a slow trickle on route 20 that ends as a jammed parking lot with stands for local produce strung along the roadsides. Lee and Schamus use characters as cultural touchstones coloring the landscape. Billy (Emile Hirsch, "Into the Wild," affecting), a disturbed vet, represents the Vietnam war. Vilma (Liev Schreiber, "X-Men Origins: Wolverine," terrifically charming and inventive), an ex-Marine transvestite, is both a reflection of new sexual mores (Elliot is gay and has yet to come out to his parents) and a bridge between generations. Devon (Dan Fogler, "Balls of Fury," "Fanboys"), who leads the theater troupe holed up in the Teichberg barn, is an example of the hippie arts community who introduces nudity at El Monaco before its seen at the festival. A guy (Paul Dano, "Little Miss Sunshine," "There Will Be Blood") and girl (Kelli Garner, "The Aviator") Elliot meets on his trek towards Ground Zero are the drug culture, complete with head-expanding acid trip, one of the film's highlights. There are several lovely moments in the film - Elliot joins his dad and Vilma (Jake having blossomed in the circus-like environment) lakeside and suddenly they hear strains of music coming across the water - Woodstock has begun; a state cop with a daisy in his helmet gives Elliot a VIP ride to the concert grounds; Billy is grounded from his Vietnam horrors by the hill that was once a Senior Prom memory now a great mudslide; ; Lang surveying the event on horseback - and yet the film never seems to have a climax. If one were forced to pick one, it's a rather ugly scene where Jake and Elliot learn what Sonia's fears have driven her to. As Lang's assistant Tisha (Mamie Gummer, "Evening") points out from an onsite operations trailer, Elliot's family problems just might be the biggest thing happening in the Universe. After this, the film merely peters out, but Lee caps it with an unexpected irony in Lang's future plans. "Taking Woodstock" is not a fortieth anniversary tribute to a music festival but an ode to liberations both cultural and personal. Lee's film may not be ground-breaking or a masterpiece or even consistently good, but one does get the sense he accomplished what he set out to. It's a sunny ride, despite Woodstock's downpours.