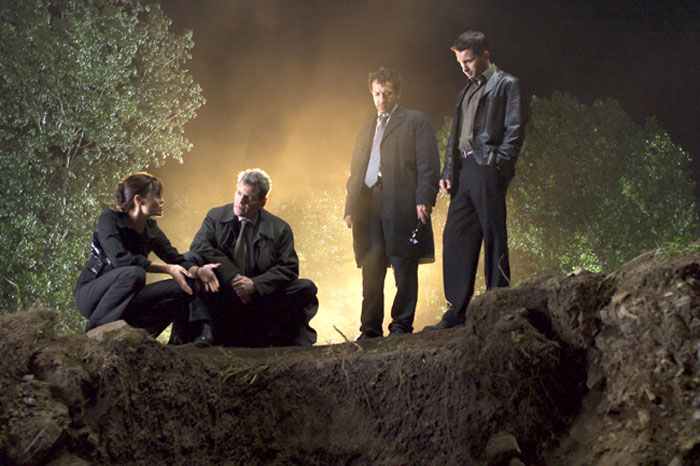 A serial killer may be on the loose in Montreal and the police, led by chief inspector Leclair (Tcheky Karyo), are having problems finding the killer. The chief contacts the FBI for assistance and it arrives in the guise of special agent Illeana Scott (Angelina Jolie), a beautiful investigator with an unconventional methodology. The cops on the case, especially detective Paquette (Olivier Martinez), resist the outsider until she starts to find clues about the murderer who is “Taking Lives.” Robin: Oscar-winner Jolie crossed the line after winning the golden statuette and went from supporting actor to star. Since crossing over, the caliber of her films and her acting in them has not reached the same level of intensity that she displayed in her early film, “Foxfire’ – which, to me, was the performance that was the better precursor for the role that won her the Oscar in “Girl, Interrupted.” In “Taking Lives,” the actress does not climb to new levels of thesping but does give a focused performance as the offbeat serial killer expert, Illeana. While costumed to keep her voluptuousness to a minimum, the camera, by lenser Amir Mokri, lovingly caresses the actress in frequent, nicely lighted close-up shots. The story, from the novel by Michael Pye and scripted by John Bokenkamp, is a well-woven tapestry of murders, stolen identities, sibling rivalry and down and dirty criminal investigation. Things start off 19 years ago when young Asher (Paul Dano), on the run from something unknown to us, meets Matt (Justin Chatwin), an aspiring guitarist heading to the west coast to find fame and fortune. When their bus breaks down, the pair buy an old clunker of a car and continue on their way. A flat tire holds them up for awhile and, while Matt changes the tire, Asher quizzes him about wife, friends and family. When he learns that Matt has no one, the conniving Asher takes the opportunity to push the clueless musician into the path of an oncoming car. Asher walks, whistling, into the sunset with Matt’s guitar and identity. Flash to the present and Mrs. Asher (Gena Rowlands) rushes to the police after seeing her long missing son, Martin, in a crowded station. She only saw him for a moment but their eyes met and she knew who he was. Meanwhile, artist John Costa (Ethan Hawke) tried to save the life of an assault victim who was brutalized by an unknown assailant who strangled, then bashed in the face of his quarry. The police take Costa in for questioning and agent Scott believes he is telling the truth. The story jumps off from here as the police, with the artist’s help, try to track down the killer who murdered countless victims to take their identity after taking their lives. This is the kind of thriller that uses its complicated, twisting plot to try to keep one step ahead of the viewer. Unlike the other recent serial killer movie, “Twisted,” which a two year old could have figured out (well, maybe a four year old), “Taking Lives” tries to give the viewer clues without giving away the punch line. (I did figure out what’s going on before the filmmakers got around to telling me, but it wasn’t as gawd-awful obvious as the Ashley Judd vehicle.) The adaptation of the material leaves a lot of plot holes that require a stretch of imagination. The ending has the feel of something that the writers pulled out of the air – I could not suspend my disbelief at the finale. Beside Jolie, in the serviceable role of Illeana Scot, the rest of the cast does well enough, too. Ethan Hawke gives a solid performance as the put upon murder witness who gives his full cooperation in helping the Montreal police track down the killer. Olivier Martinez is two dimensional as the snarling, indignant cop, Paquette, who resents the outsider’s intrusion into his case. Jean-Hugues Anglade puts an endearing spin on Paquette’s partner, Duval, who immediately likes and respects Scott. Tcheky Karyo, one of my favorite character actors, does yeoman’s work as Scott’s friend and superior on the case. It’s nice to see Gena Rowlands on the screen, even if it is a small part in a serial killer movie – fortunately, it’s a classier one than the norm and the veteran actress makes something out of the miniscule role. Keifer Sutherland fans will be, in a word, disappointed. The actor is given little to do except act menacing. Techs are good with the dark, moody lensing by Mokri giving the crime scenes the gritty sordidness required. Use of Montreal and other Canadian locations to actually depict Montreal is a breath of fresh air. The city has stood in for other metropolises for so long that it’s nice to see the beautiful locations get their due (and it looks so clean). Editing, by Anne V. Coates, is without note and, sometimes, choppy. Philip Glass’s score fits the bill for the mood and feel of the film I’m not a prude, not by a long shot, but I found the obligatory sex scene - that’s all I’m going to say by way of detail - totally gratuitous and out of place, even with Jolie in the nude. The scene is there for the dual purpose of establishing a plot point later in the film (this could have been handled more delicately and with style) and giving the Angelina Jolie voyeurs their due. “Taking Lives” is like a piece of bubble gum. You enjoy the chew while there is flavor but once it’s gone it is time to spit it out and move on. I give it a C+..

A woman (Gena Rowlands, "Playing by Heart") reports to police that she saw her son, who had died nineteen years previously, on the ferry that morning. A mutilated body is found at a Montreal construction site. Local police director Hugo Leclair (Tchéky Karyo, "The Core") calls in F.B.I. profiler Special Agent Illeana Scott (Angelina Jolie, "Beyond Borders") to assist with the case. His grousing underlings Joseph Paquette (Olivier Martinez, "S.W.A.T.") and Emil Duval (Jean-Hugues Anglade, "Nelly & Monsieur Arnaud") find her lying in their victim's grave site 'sensing' information about the killer. When a local art dealer, James Costa (Ethan Hawke, "Training Day"), witnesses and interrupts a second murder, Illeana connects the dots to surmise that they've got a serial killer operating, who is jumping from identity to identity "Taking Lives." The phrase 'from the sublime to the ridiculous' was made to describe "Taking Lives," a beautifully produced and directed melange of serial killer thrillers with two major 'twists' set up so preposterously the twist is essential to retain believability. This technically elegant film has an immediate visceral punch, but it is built upon the shakiest foundation. In a flashback to 1985 we see the birth of a serial killer as teenager in a scene that surprises despite its prominent use in the film's trailer. Opening credits feature extreme closeups of contact lens insertion and hair shaving in the much-used style of "Seven." Scott is introduced as an amalgamation of "Manhunter's" Will Graham and "Silence of the Lamb's" Clarice Starling. She breaks into the home of Mrs. Asher (Rowlands) to find a 'secret room' which turns out to be a "Psycho" style child's bedroom in a Buffalo Bill-creepy basement. In a later scene, Scott receives a head-shaped box, surely meant as an in-joke reference to "Seven's" dark conclusion. The character of Scott was not present in Michael Pye's novel, but created by screenwriter Jon Bokenkamp. Perhaps this is why an early, central plot point of "Taking Lives" makes little sense after further developments, even though rearrangement of early scene order could have fixed the problem. Jolie's Scott is an icy mask with a literal eye for detail (Caruso and editor Anne V. Coates use closeups of her shifting glance liberally) until she finds herself falling for her terrified witness. In a reversal of the typical male/female roles, Hawke's Costa is the one in need of protection from the strong, mostly silent Scott. The chemistry between the two is, frankly, another element of "Taking Lives" that requires suspension of disbelief. Martinez and Anglade provide a nice contrast as the cop who is staunchly against Scott's 'touchy-feely' investigative techniques and the more accepting peace-keeper while the normally dependable Karyo add little. Sutherland was apparently cast for his threatening purr of a voice. Veteran Rowlands stuffs her scant screen time with a rich abundance of character definition. Director D.J. Caruso ("The Salton Sea") almost overcomes plot deficiencies with sheer technical ability, such as linking the killer across decades in two scenes where the outside world is artfully obscured from within a car's interior. In a tense nightclub scene, where Costa is being used as bait, Philip Glass's effective score is mixed into the nightclub din for an eerie, unsettling feel. Cinematography by Amir M. Mokri ("The Salton Sea") is stylish, but location shooting is questionable. While it is refreshing to see a movie filmed in Canada that is actually supposed to take place in that country, one wonders why Québec City's recognizable Chateau Frontenac landmark is plunked into Montréal. "Taking Lives" is more serial killer dross given a higher gloss than it deserves. It's a popcorn movie that delivers shocks like adrenaline placebos.