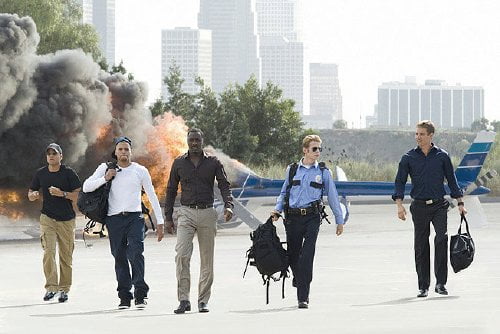 The five men are a team of professional bank robbers. In and out in a minute and a half, leaving no evidence, they have eluded the police for years. When one of their former numbers is paroled after being arrested several years before, he shows up at their hangout and proposes one last, big heist. But, it is a rush job and goes in the face of their usual meticulous planning, raising the stakes for the “Takers.”

Jack Welles (Matt Dillon, last seen trying to rob an armored truck in "Armored") is frustrated in his investigation of an armed bank robbery carried off with dazzling nerve until the fragment of a map and a photograph of some Russian gangsters provide him with the thread to pull that will unravel the entire makeup of the "Takers." Cowriter/director John Luessenhop had a decent heist movie on his hands until he decided to go all "Smokin' Aces" on us with his ridiculous climax (complete with plaintive violin score maxed in the mix). Sure it's over stylized (cinematographer Michael Barrett likes that 'amateur' shooting style where the camera zooms in and out and pans all over the place) and Hayden Christensen ("Star Wars: Episode III - Revenge of the Sith") is annoying as all get out as a porkpie hat wearing hipster channeling Steve Buscemi, but "The Wire's" Idris Elba commands attention as Gordon Jennings, the extremely capable, no nonsense leader of the once a year robber gang who needs to get himself and his crackhead sister Naomi (Marianne Jean-Baptiste, "Secrets and Lies") back to the Caribbean island they once called home. Luessenhop and his cadre of cowriters don't exactly make it clear why the release of Ghost (Tip 'T.I'. Harris, "ATL"), the guy who got shot and caught during the group's last job poses such a problem on both sides. Everyone walks on eggs around the guy, including Gordon's right hand man John (Paul Walker, "The Fast and the Furious") who's surprised to find Ghost sipping Scotch in his living room one afternoon. Ghost wants to meet up with the rest of the crew, even the guy who got his girl (Zoe Saldana, "Avatar"), and, after ditching the low riding pants for a pricey new suit (these guys like the luxe life), he finds them in their private club. Some Russians have given him airtight info on an armored truck route and, Gordon, against his better judgement, goes for the always ill-fated one last job. Jack has his own set of problems. After spying Ghost's prison bracelet in that mob photo, he follows the guy and sees him connect with Gordon and Jesse (Chris Brown, "This Christmas"). Later, on a day off with his daughter, he spies Gordon and John and tails them, taking his little girl for quite the spin. Then he's called to the Lieutenant's office to be shown a video of his partner Eddie (Jay Hernandez, "Hostel") engaging in activity that has peaked the interest of Internal Affairs. While there's a lot of posturing in "Takers," there are a few really good action scenes, particularly a foot chase through the streets of L.A. The armored truck heist doesn't go as planned which makes it all the more interesting. But never for a minute did I believe Hayden Christensen could take out three tough guys and the climax goes south before it even begins, a bunch of snarling Russians carrying large black canvas bags through the lobby of the Roosevelt Hotel a sure tip off to security. The finale is simply strange, lapses in logic papered over by simply neglecting to fill in the blanks. "Takers" doesn't know when to quit while it's ahead.

Sophomore director John Luessenhop co-writes (with Peter Allen, Gabriel Casseus and Avery Duff) this bank heist thriller and it mostly works. We meet Jesse (Chris Brown) and Jake (Michael Early) Attica, Gordon (Idris Elba), John (Paul Walker) and A.J. (Hayden Christensen) as they pull off their latest, split second-timed bank robbery. They get away without a trace, dumbfounding the police, and go to ground until the heat is turned off. Then, their old partner, Ghost (T.I.) shows up with the proposal for an armored car heist, a real “Italian Job.” The promise of a $30 million take gives them pause – this will be their last job - and they cast their normal caution to the wind, accepting the far too short schedule to pull off the hijacking. Luessenhop steadily ratchets up the action, bringing in detective Jack Welles (Matt Dillon), a troubled cop who works with a partner, Eddie Hatcher (Jay Hernandez), who is battling his own demons. Jack and the robbers’ paths are on a collision course that will upset the delicate fabric of the armored car caper. The filmmakers and their story keep both pace and action moving at a good clip. Unfortunately, they suffer from overzealousness and, for the finale; they hit you with everything they have, including an assault on LA’s Roosevelt Hotel by a gang of crazy, big gun toting Russian mobsters. It is a whirlwind, bang up finish that pulls you away from the taut thriller so carefully handled until the banal blowout. The ensemble cast works well together with the five criminals, and their Iago, Ghost, forming a brotherhood of thieves with honor. Except for, of course, Ghost. He and Gordon’s junkie sister Naomi (Marianne Jean-Baptiste) are the wrenches that will get thrown into the well-oiled works of the gang. Matt Dillon has to go it alone, with and without Eddie, for much of the film and does his loner-in-turmoil with a hang dog manner. Jack is a man that has carried more than his weight for far too long. Jay Hernandez, Zoe Saldana and Johnathan Schaech have small roles with only two dimensional characters to play. The premise for “Takers” has been done before, most recently with the superior “The Bank Job,” but still makes for good entertainment. Solid direction, an almost-terrific story, good ensemble acting and fine behind the camera work make the trip to the air conditioned theater on these dog days of summer worthwhile.