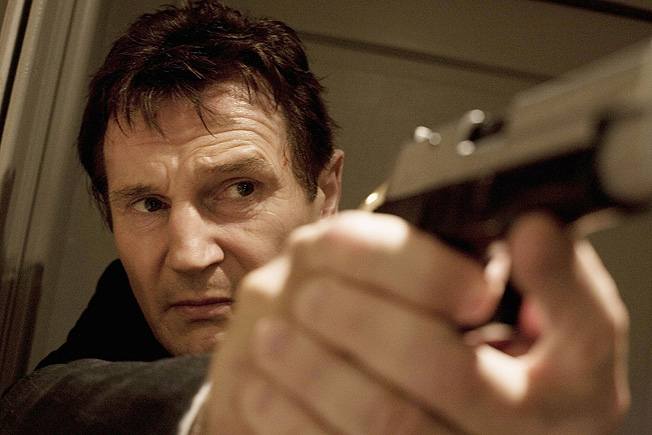 CIA Op Bryan Mills (Liam Neeson, "Batman Begins," "Kinsey") lost his family over his job, so retired early and moved to LA in order to reconnect with his daughter, Kim (Maggie Grace, "The Fog," "The Jane Austen Book Club"). He's up against the extreme wealth and privilege of Kim's new stepfather Stuart (Xander Berkeley, "Sid and Nancy," 24's second season) and the frost emitting from ex-wife Lenore (Famke Janssen, "X-Men," "The Wackness"), so when he's asked to give permission for the sixteen year-old to leave the country with her slightly older friend Amanda (Katie Cassidy, 2006's "Black Christmas," "When a Stranger Calls") on a European dream trip, he reluctantly gives his consent providing Kim follows his rules. When she doesn't follow through on the very first of those - calling when her plane arrives in Paris - he's alarmed and sure enough the two young teenagers have been targeted by white slavers and have been "Taken."

Take the Parisian American kidnapping plot of Roman Polanski's "Frantic" and cross with the father-spiralling-into-the repulsive-world-of-the-porn-industry of Paul Schrader's "Hardcore" then add a dash of "Bodyguard" and Luc Besson's penchant for carrying things way over the top and you've got "Taken," a film that impresses if for nothing else but the way it compelling turns the fifty-six Liam Neeson into an action star. Unfortunately, he's also the kind of action star that can survive hundreds of rounds of bullets while taking out bad guys with deadly aim, an action movie cliche that has outlived the sophistication of today's audiences. That's not the only cliche and the film is also riddled with coincidence and contrivance, but Neeson, whose presence here is a bit of a mystery, keeps things interesting. We first meet Bryan reflecting on some 5th birthday pictures which mistakenly sets us up for a child kidnapping, but no, that child is now sixteen, albeit the type of sixteen year old who gallops about like an uncoordinated pony. Bryan has carefully chosen a top-of-the-line karaoke machine for his singer wannabe daughter and, once he gets past Lenore segregational party rules, presents it to a thrilled Kim. But no sooner has dad gotten a birthday photo for his scrapbook than Stuart presents his gift to Kim - a thoroughbred horse. Back at his crummy apartment, the doorbell rings and Bryan admits three ex-colleagues he'd forgotten were invited. They offer him an easy one-off security job escorting chart-busting singer Sheerah (Holly Valance) to and from a concert. Bryan accepts, and of course ends up saving Sheerah's life from a knife-wielding nut job, for which he gains heaps of gratitude, but before he can pass along the inside connections he's amassed to Kim, he's sideswiped with the Parisian summer trip. When the girls land at DeGaulle airport, they're approached by the good-looking young Peter (Nicolas Giraud) to share a cab. Later, when a worried dad finally reaches Kim on the cell phone he's given her, it is just in time for her to witness Amanda's forcible abduction. Dad instructs her to crawl under a bed and give him all the info she can when she's inevitably found. He gives the recording to buddy Sam (Leland Orser, "Twisted," "The Good German") who informs him Kim has been taken by Albanians so dangerous even the Russian mob fears them and that their victims are never heard from again once 96 hours have passed. Bryan suppresses 'I told you so's' and commands Stuart to charter him a plane to leave 'an hour ago.' And so Bryan goes up against formerly friendly French authorities, the nasty white slavery ring and the rarified auction house they supply whenever they encounter a virgin, Kim's status as such having been conveniently foreclosed to Amanda. Bryan appears to be a crack agent on the Bourne level and in short order has located her jacket in a construction site bordello (where he gets the medical supplies to hook up the drugged teen who had it with an IV in a hotel room is one of those types of thing the filmmakers cannot be bothered with addressing). There are two really good set pieces amidst all the genre silliness that is "Taken." Bryan approaches the Albanian HQ under cover as a corrupt French cop, a scene that fairly crackles as he tries to connect the last voice he heard on Kim's phone to one of the men before him. Later, he visits the home of Jean-Claude (Olivier Rabourdin, "13 Tzameti," "Actresses") and exposes his corruption at the dinner table with something akin to pizzazz. Neeson is so above this material, so unexpectedly good as a fast-moving operative, one wonders why it took so long for someone to recognize this potential in him. Director Pierre Morel ("District B13") keeps things moving along at a snappy pace, but does nothing to tone down the more preposterous aspects of Luc Besson & Robert Mark Kamen's ("The Fifth Element," "District B13," the "Transporter" series) script, which completely derails in its river boat climax (there is absolutely no true motivation for Kim's last kidnapper to threaten her life) and the 'oh gee we almost forgot about that plot line' denouement. "Taken" is a must for Neeson fans curious to see him in a new, late coming light, but otherwise it is nothing but a cheesy, patched-together genre exercise with a couple of thrilling confrontation scenes.