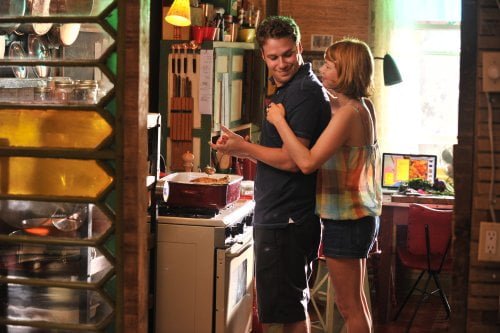 Away on a business trip to Cape Breton, Margot (Michelle Williams, "My Week With Marilyn") finds herself sitting beside Daniel (Luke Kirby, "Mambo Italiano"), the man she'd met at a historical site, on her return flight and confides in him her worst fear - getting stranded between connections, being neither here nor there. Life takes another strange turn when they discover they live across the street from each other and the spark they felt must coexist with Margot's happy marriage to cookbook author Lou (Seth Rogen, "50/50") in "Take This Waltz."

Oh, what a frustrating affair is writer/director Sarah Polley's ("Away From Her") sophomore film. On the one hand, it's an honest look at the lure of early romantic love over the long term kind, yet on the other, it often features dialogue no real person would ever utter. Ingenious casting gives us a spot on dramatic turn from the comic Seth Rogen, but Oscar nominated Michelle Williams inhabits her character like a fruit loop emotionally arrested at the age of twelve. Polley's penchant for handling sex openly goes over the top, with gratuitous nudity in a women's locker shower that goes on so long it gets silly and a late plot development that off-handedly throws three-way sex into the mix in a montage that kills the romance she's conjured earlier. "Take This Waltz" is awkward and frustrating, yet moments of sheer beauty and truth shine through. In fact, nothing about the film feels at all natural until Seth Rogen enters the picture. Margot's trip was to experience a historical recreation site so that she could rewrite its tourism brochure. There is a wedding staged, followed by the flogging of an adulterer where Margot is goaded into participating. This is a heavy foreshadowing of what is to follow. When Margot gets home, she falls back into her comfortable, five year-old marriage of gory/funny word games, baby talk and embracing Lou as he stands in front of the stove, working out yet another twist on chicken. Lou's extensive family envelops them on a visit and his sister, recovering alcoholic Geraldine (Sarah Silverman, "Sarah Silverman: Jesus Is Magic"), is friendly enough to take Aquafit classes with her brother's wife. The two women explode into collusive laughter when Margot's pee in the pool sets off a dye, but Geraldine also recognizes that the strange man sitting in the stands caused the commotion. (Polley the writer creates two separate parallels - the sister-in-laws' common need for 'highs' and urine as a symbol for the familiar comfort of marriage - in the example just noted almost released like a biological retardant.) But Margot is intensely aware of Daniel now, and the two engineer 'chance' meetings on the street, even at 5:30 in the morning. After the pool incident, Margot has an afternoon martini with Daniel and blushingly admits 'I want to know what you'd do to me.' Daniel slowly builds a very explicit description that leads the two into fits of giggles, but now that the desire has been stated, Daniel's the one who begins to feel uncomfortable being left in the middle. His decisive action forces hers. Polley's earlier work casts her as a romantic and she and her cinematographer Luc Montpellier ("Away From Her") do a great job visualizing the rush of romantic desire. There's an amusement park ride Margot deems 'safe' to go on with Daniel which is the first of their two 360 scenes with the two lovers (set to The Buggles' 'Video Killed The Radio Star'). Williams does a little head bob to the music which is picked up by her partner, an echo of an earlier scene with Lou separated by their kitchen window. Later, Daniel, who is an artist who supports himself as a rickshaw driver, offers a ride to Margot and Lou when he meets them in front of their house on the way out for their anniversary and the lighting on Michelle Williams' as she watches Daniel's athletic back is magical. But the supposed pitfalls of familiarity aren't represented as strongly - sure Lou evades discussion a couple of times, but that's a rather common male trait and when Margot tells him how her efforts to seduce him are emotionally scary for her, it just seems like more craziness. Rogen's the one to watch here. He's got the emotional heavy lifting to do, Polley's camera resting only on him for what appears to be an entire day of marital breakup, his series of reactions cut together until once again Lou and Margot are separated on either side of that kitchen window for him to motion to her with a gentle 'Just go.' Kirby's also good, mysterious and sexy, but his character seems to harden in the film's last act. Polley's meant Margot's decision to be ambiguous, yet nothing about its aftermath feels right - Lou is a soulmate and Daniel a diversion. "Take This Waltz" is a bold work, but not all of the risks Polley's taken have paid off.