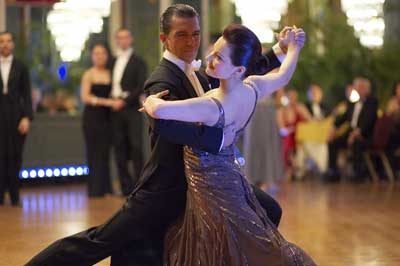 Former professional ballroom dancer turned dance teacher Pierre Dulane (Antonio Banderas) wants to make a difference. He offers his talent and services to Augustine James (Alfre Woodard), the principal of a New York City public high school. She takes him upon the offer but, instead of having him teach dancing, she assigns Pierre to take babysit the school’s most incorrigible students in “Take the Lead.”

Think “To Sir with Love” with dance lessons. That’s an apt description for “Take the Lead” as Pierre faces his new charges – the inhabitants of detention hall. This rainbow coalition of sassy students appears to be the only troublesome pupils in the inner city high school since they are the only ones ever sent to detention. They dis Pierre when he announces that he is going to teach them ballroom dancing and refuse to cooperate. Dulane brings in his top instructor, a very sexy and lithe lady, to demonstrate the grace and challenge of his art. The kids are, of course, transformed as they embrace Pierre’s training and elaborate on it with their own hip-hop style. There is nothing new or surprising in “Take the Lead.” Banderas and company go through their expected paces with the kids being what Hollywood perceives as inner city high schoolers. Antonio plays Pierre as formal and gentlemanly, using his patience and dance teaching skills to get to his reluctant students. The kids are sometimes amusing but none of them, except for Rob Brown as the sullen loner Rock, ring true. They are more caricatures than characters. Music video helmer Liz Friedlander, making her feature debut, handles the dance sequences well enough but gives the dramedy a flat, by the numbers feel. This is exacerbated by the clunky, seen-it-before script by Dianne Houston that lends nothing original to this based-on-a-true-story vehicle. I suppose there is an audience out there for “Take the Lead,” most likely with the teen crowd. There isn’t nearly enough substance or originality for the discerning filmgoer.