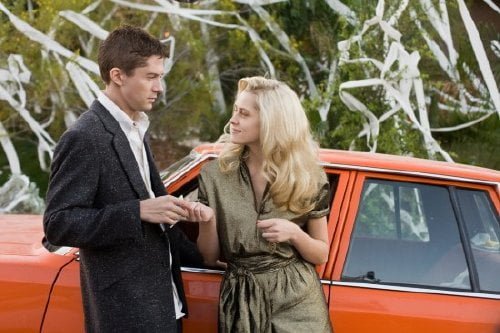 After graduating from MIT, Matt Franklin (Topher Grace, TV's 'That '70s Show') has a dead end job at Suncoast Video. His fraternal twin Wendy (Anna Faris, "The House Bunny," "Smiley Face") is going out with Kyle Masterson (Chris Pratt, TV's 'Parks and Recreation'), the guy who's had a high school reunion bash every year since they graduated from Shermer High, and who challenges someone to 'ride the ball' every year. Matt never goes to these bashes, but when his old high school crush Tori Frederking (Teresa Palmer, "I Am Number Four") comes into the store, Matt pretends to be a customer, tells her he works for Goldman Sachs, and agrees to meet her at Masteron's in "Take Me Home Tonight."

Topher Grace can project a very likable screen presence (see his "Ocean's Twelve" cameo), but his appearances since have been few and forgettable. "Take Me Home Tonight" is an attempt at an unironic '80s movie from writers of 'That '70s Show' that's already dated itself, having been made all the way back in 2007, and which more recalls 1998's Jennifer Love Hewitt vehicle "Can't Hardly Wait" than anything from John Hughes. Director Michael Dowse ("It's All Gone Pete Tong") establishes his time period with a shot of a radio playing, ironically, 'Video Killed the Radio Star,' but doesn't really provide a solid rationale for Matt's underachievement - the math whiz claims to not want to be an engineer like his dad, L.A. policeman Bill (Michael Biehn, "Aliens," "Grindhouse") had hoped - but that doesn't explain why he hasn't chosen another path. On the same day of the party, Matt's best friend, Mercedes Benz salesman Barry Nathan (Dan Fogler, "Balls of Fury," "Taking Woodstock"), quits his job for a nonsensical reason (a customer catches him out, which explains why Barry suddenly directs his fury at his employer? huh?). On the way to Kyle's house, Barry directs Wendy to the dealership so they can steal a red sports model, all the better to shore up Matt's lie to Tori, security cameras be damned. Like most of this type of film, the story takes place over the course of one day into the next. Matt's ruse works, even when the party moves from Kyles to Tori's boss's manse in Beverly Hills, then he tells the truth because every romcom needs an obstacle. Matt's plunge into giving himself some direction and breaking out of his rut is to, of course, 'ride the ball,' a huge metal sphere whose path, of course, goes wildly awry. The film confuses at first, because it takes a while to realize that Kyle Masterson is Wendy's boyfriend - there is no reason why these two people would be together. In addition to the film's other problems, the L.A.P.D. is shown excusing the destruction of property as a kid's prank. A kinky Beverly Hills sex scenario involving Fogler is just inconceivable. The film does a good job with its '80s touchstones from Wendy's brown eyeshadow and matching lipstick to Matt's three quarter sleeved jacket and skinny tie. The soundtrack features the likes of Duran Duran, Dexy's Midnight Runners and Atomic Tom's cover of The Human League's 'Don't You Want Me, Baby,' recently used to much better effect in "Cyrus." Grace and Faris are actually brilliant casting as twins, although Faris doesn't really get an opportunity to shine here - she's in the straight man role. Topher and Teresa Palmer make for an appealing couple, but smaller supporting players make bigger impressions. A pre-Parks Pratt is great in frat boy mode and Michelle Trachtenberg (TV's 'Buffy the Vampire Slayer,' 'Gossip Girl') is an amusing goth chick. Star-on-the-rise Lucy Punch ("Dinner for Schmucks," "You Will Meet a Tall Dark Stranger") probably wishes this had never seen the light of day. "Take Me Home Tonight" is thoroughly mediocre and forgettable, nor is it the trip down memory lane it thinks it is. Why this one's getting a theatrical release after four years is a mystery.