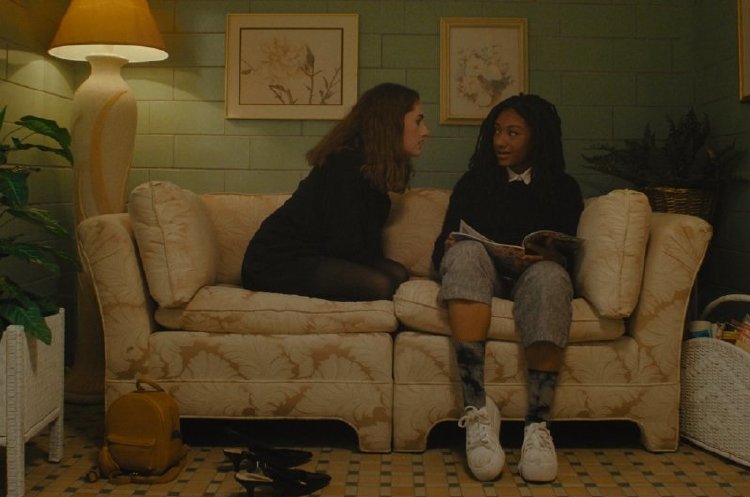 Carrie Lowstein (Madeline Grey DeFreece) is surprised by her best friend Hannah Rosen’s (Rachel Sennott, "Shiva, Baby") gossiping and fidgeting lack of respect during the funeral service for Samantha, a member of their Hebrew school.  She’ll be stunned by her own reaction to Hannah’s insistence that they kiss in the ladies’ room.  But while Carrie’s emotions are stirring, Hannah is obsessing over Tristan Leibotwitz (Daniel Taveras), so much so that she will endanger their friendship when she learns Tristan prefers Carrie in “Tahara.”

This coming of age tale is the contrasting character study of quiet, introspective Carrie, who realizes she feels more than friendship for her bestie, and showboating, self-absorbed Hannah, who takes going after what one wants too far, a combination which results in both moving drama and cringey comedy.  The feature film debut of writer Jess Zeidman and director Olivia Peace was made for $100,000 at Zeidman’s Temple Beth-El in Rochester, New York featuring a largely female crew.  After premiering at 2020’s Slamdance, the film went on to win a Jury prize at Outfest.

The difference between the two young women is evident at the coat check, Carrie’s somber mien befitting the occasion, Hannah fooling around.  During the service, Hannah gossips about Elaina Cohen’s (Shlomit Azoulay) nose job (an animated skier glides down its slope, one of the film’s many quirky, innovative touches) and her mother’s purported lesbian relationship.  In every solemn setting, Hannah noisily draws attention to herself, dropping a prayer book during the service, her slingback heels a source of constant clacking.  By the time the duo attend the dreaded Teen Talk-Back, a hilariously ineffective structured ‘grief counseling’ session led by teacher Moreh Klein (Bernadette Quigley), Hannah literally falls out of her chain straining for Tristan’s notice.

The film’s title, “Tahara,” refers to the Jewish rite of preparing a body for burial, the central subject of the Talk-Back, but one can surmise Zeidman’s going for a double entendre here.  Sennott utilizes exaggerated comic miming for the church gossip scene, then slips into natural gross-out humor while aggressively zeroing in on a zit in the ladies’ room bathroom mirror.  Once she convinces Carrie to kiss her in order to evaluate how good at it she is, she pulls back with blithe self-satisfaction, but DeFreece’s expression tells us quite another story, one of wonderment, sexual awakening and confusion.  The fallout will allow each actress to go off on her own, Sennott to further misuse her friend by plotting with Tristan, DeFreece to relax with shared cucumber vape with Hannah’s aforementioned target Elaina.

Cinematographer Tehillah De Castro shoots in an odd, rectangular aspect ratio suggesting a phone, a choice which adds little and can, at times be distracting (after the kiss, the frame briefly expands to widescreen, a nice touch but not enough to warrant the claustrophobic framing).  The kiss itself is illustrated with claymation, a device which allows the two faces to meld together.

While Zeidman’s script obviously focuses on her two protagonists, one of its most striking aspects is how she brings the deceased to life.  As Mrs. Goldstein (Lynne Taylor) thanks the girls for coming, their reactions and shared recollections, Carrie’s sincere and regretful, Hannah’s offhanded, paint the picture of a nice but lonely girl who loved horses and deserved more.

Carrie (Madeline Grey DeFreece) is anxious about attending a fellow student’s funeral at a local synagogue. But, her best friend Hannah (Rachel Sennott) and secret crush Tristan (Daniel Taveras) complicate things as the young woman tries to find her real “self” in “Tahara.”

First-time feature director Olivia Peace brings us a gay coming-of-age story set in a synagogue during the funeral of classmate Samantha, a victim of suicide. But, in the story, by Jess Zeidman, the teen’s death is almost incidental as Carrie and Hannah experiment and discover themselves in the midst of a funeral.

The grief counseling led by elder Moreh Klein (Bernadette Quigley) should highlight the very real problem of peer shaming and teen suicide, but it is done for absurdity instead. It feels like, though, that Samantha’s death is a convenient setting for Carrie and Hannah “finding” each other as they explore their sexuality. What Tristan is doing here evades me.

There is a conflict, to me, between the somber setting and event and the what seems to be selfish behavior by the two teenagers, with Hannah taking the lead in selfishness. Coming-of-age and coping with death are two very different themes and the filmmaker should have chosen the obvious one over the other. Or, give it a different, less morbid, setting