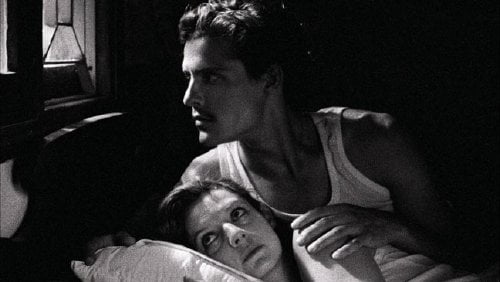 Pilar (Teresa Madruga) is a single, retired Catholic living in Lisbon. She spends her time doing for others and is particularly concerned about her neighbor, the elderly Aurora (Laura Soveral), whose grasp on reality appears to be slipping. Aurora distrusts her Cape Verdean caretaker Santa (Isabel Cardoso), but it is Santa who calls Pilar to let her know Aurora has taken a turn for the worse. The old woman asks Pilar to find one Gian Luca Ventura (Henrique Espírito Santo), a man who will tell the tale of Aurora's past when she lived at the base of Mount "Tabu."

Cowriter (with Mariana Ricardo)/director Miguel Gomes takes the themes and structure of F.W. Murnau's 1931 "Tabu: A Story of the South Seas" and turns them upside down for an intriguing reverie on memory, sin and Portuguese history in a film that celebrates movies past. The film was shot by cinematographer Rui Poças in black and white academic ratio and begins with a lyrical tale about a 'taciturn and melancholic' intrepid explorer who mourns the loss of his young wife while wandering the plains of Africa accompanied by native guides. This sets the stage for the two parts which follow, 'Paradise Lost' and 'Paradise.' The first story follows Pilar and Aurora in present day Lisbon. Pilar is always working for causes and charities, offering to host young Polish travelers, checking up on her neighbor. She even hangs a painting by a friend which she hates so as not to hurt his feelings should he stop by. Across the hall, Aurora thinks Santa is performing witchcraft against her and escapes to a local casino where she spends every last cent because an odd dream gave her a hunch. Santa appears to bear Aurora no ill will, but as she's hired by Aurora's daughter, who never visits, she won't allow Pilar to intervene. After getting Aurora's request at the hospital, Pilar finds Venura, but it's too late. But not too late for him to narrate the events of 'Paradise.' This sequence, where film stock degrades from 35 mm to 16, has no dialogue, only sound, as we listen to Gian Luca (now played by Carloto Cotta, "Mysteries of Lisbon") tell his and Aurora's (Ana Moreira) tale. She was a child of wealth, spoiled (the servants speculate demonic), known as a big game hunter. She is happily married to a handsome man (Ivo Müller) who gifts her with a baby crocodile. Mário (Manuel Mesquita), a man who left the seminary in Portugal, has formed a band in Africa and Ventura was its drummer and Mário's good friend. They all move in the same, tight ex-pat circle. Her cook, who foretells the future with the entrails of the meat he prepares, tell the others that their mistress is pregnant and will die bitter and alone and is fired when word reaches Aurora's ears. When her pet wanders away into Ventura's garden, the two begin a torrid affair. It does not end well. The latter part of the film recalls 1987's "White Mischief," but in Gomes's hands, the story becomes much more. With his structure, the past and the present continually flow into one another, revealing history as a multi-faceted account which by its very nature will always hold secrets. We never do learn, for example, why Aurora and her daughter are estranged, but can come to conclusions which may or not be correct. Similarly, the African people both past and present, are never given voice to their thoughts but their presence always registers and implies. Music of the 60's is the timeless element which tie the past to the present. Many little detours often feel like dead ends, until one reflects on all the meanings of the film. Pila and her painter friend (Cândido Ferreira) visit some caves and laugh at the interpretation provided by the tour guide, just as Pilar thinks Aurora's ramblings are nonsensical. Ventura relays the story of an African party host and his son and it seems inconsequential to the action until we think about colonialism and the bizarre, often decadent behavior of the invaders, especially as seen through the eyes of those they exploited. With "Tabu," Miguel Gomes has taken historical and cinematic past and conjured a unique home movie of a dream through which to reconsider the present. Great craftsmanship is used to present provocative ideas all tied up within a compelling story.