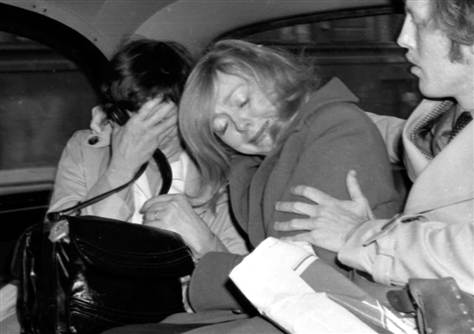 Documentary filmmaker Errol Morris worked behind his camera for decades before the Academy bestowed upon him his first Oscar for the brilliant, thought-provoking “Fog of War.” Now, he uses the same talking-head device to tell the story of a woman who was the center of attention for England’s working-class newspapers for much of the late 1970s. Morris examines the life of Joyce McKinney who became the darling of the “Tabloid.”

Writer/director Errol Morris ("The Fog of War") has long been drawn to tabloid stories and in his latest his subject, Southern beauty queen Joyce McKinney, gives him not one, but two! And while "Tabloid" is undeniably entertaining, hilarious at times, it is also a little troubling, the first of Morris's works to, ironically, seem to exploit his subject(s). The obsessive Joyce was looking for a 'special' man, someone clean cut with good manners, when Kirk Anderson pulled up next to Joyce's orange Corvette in a white one. It was the 1970's in Utah, but Joyce apparently knew little about the Mormons who surrounded her. After Kirk's mama met Joyce, even though she says they were engaged to be married, he suddenly disappeared. She hired a P.I. and discovered Kirk was doing his missionary work in England. Deciding that the Mormon Church had brainwashed her man, Joyce set out to kidnap him. Then she kept him in a remote country cottage and proceeded to have sex with him for days on end. She became a British tabloid sensation when Kirk, perhaps agonizing with guilt, returned to the Church telling a tale of manacled, forced sex. Decades later, Joyce paid $100,000 to have her pet pit bull cloned in Korea, setting off another flurry of tabloid stories. One can see why Morris would be drawn to McKinney. By using his Interrotron (a Morris device that enables his subject to speak directly to the camera without really being aware of doing so), Joyce tells her tale with great animation, flourishes, funny facial expressions and humor. But Morris also speaks to the reporters who made hay with the British trial and yet another side of Joyce, the one who made money in bondage-for-hire scenarios, comes out. By letting Joyce tell her own story, we can read between the lines, but, as one interviewee notes, Joyce seems barking mad. When she talks about Booger, the dog she picked up from the street and later had cloned, she claims he could open a door and dial 911. There's also the Mormon interviewee who provides the Church's angle and stands in for Anderson, who did not cooperate with the film. Some of the background Morris fills in makes the Mormon religion sound closer to Scientology. And then there's Anderson, who, despite quite understandably not wanting to cooperate and dredge up a decades old embarrassment, is shown in present day driving his car while McKinney insults his wife and his job. To his credit, Morris also illuminates tabloid journalism, as multiple reporters reveal their tactics (some clearly not believing their luck). And the film is often laugh out loud funny (when asked if it is possible for a woman to rape a man, Joyce replies that that 'would be like stuffing a marshmallow in a parking meter.' Her escape from Britain is also a bit of unbelievable chutzpah, its ingenuity perhaps partially explained as much by her 168 IQ as her predilection for drama. "Tabloid" is a tough call. Did Morris use the title to admit that he has, indeed, taken on the mantle of tabloid journalism in documentary form? As a storyteller and interviewer, though, Errol Morris is at the twisted top of his game.

If “Fog of War” is the definitive treatise on American foreign and military policy during the 1960s and early 1970s, as seen through the eyes of Robert McNamara, then “Tabloid” is an expose of the power of the tabloids, and how they affected McKinney’s life, in a day before the Internet, email, reality TV and YouTube. Joyce McKinney was voted Miss Wyoming when in her teens. In the mid-1970s, she moved to Utah where she fell in love with Kirk Anderson, a Mormon who would later be sent on a secret mission to London to spread the word of the Later Day Saints. Joyce was devastated by his sudden disappearance and began a one-woman campaign to find Anderson and “free” him from the Mormon cult by abduction, bondage and seduction. This would come to national prominence in the UK where tabloids like the Daily Mirror dubbed it the “Case of the Manacled Mormon.” McKinney’s story, as told through the reports in the Daily Mirror, shows a woman of questionable morals who used a gun to kidnap Kirk Anderson, tie him to a bed and “rape” him repeatedly in order to have his baby and break the hold on him by the LDS. Of course, as one reporter points out, there is no such thing as a woman raping a man, it just cannot happen. Morris also shows the different views of the tabloids. The Daily Mirror, and other conservative papers, showed McKinney as a “bad girl” while the more liberal Daily Express and other newspapers played Joyce up as a “good girl.” Ah, the power of the press. Errol Morris, with his copious interviews with McKinney and those around her during the time of the scandals, builds the complicated story in his typical fashion. Lots of information is provided in interviews with McKinney, long-time friend Marilyn Park, friend and always present during Joyce’s quest, Keith Joseph “KJ” May, pilot Jackson Shaw, Daily Mirror photographer Kent Gavin and tabloid reporter Peter Tory. This is supplemented with photos, films and the stories as printed in the British tabloids that tell a varied tale. What is real and what is fiction, in this reality show that preceded all others by over 20 years, is a matter of conjecture. Morris lays out all the sordid details, mixes in lots of whimsy, a bit of risqué photography and, finally, an experiment in cloning Joyce’s beloved pit-bull, Booger. “Tabloid” is entertaining and I learned about a lady who created a tempest in England but is almost completely unknown in the US – until now.