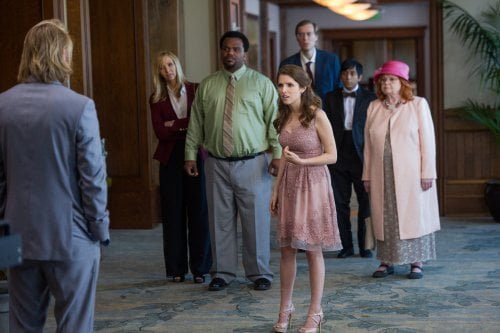 When Eloise McGarry (Anna Kendrick) gets an invitation to the wedding of her oldest friend, she agonizes over the RSVP card. We have no idea what's wrong until she begins to open up to the assortment of oddballs seated at the wedding's least desirable "Table 19."

"Rocket Science" director Jeffrey Blitz is hampered with a contrived, sloppy script from Jay & Mark Duplass ("Cyrus") but blessed with a diverse ensemble led by the immensely likeable Anna Kendrick. But once Blitz gets past his obviously telegraphed wedding cake disaster and removes his guests from the ballroom, the film's pace and focus begin to fall into place. It leaves us on solid footing, but the film's wobbly course cannot be shaken. Diner owner Jerry Kepp (Craig Robinson) cannot figure out why his wife, Bina (Lisa Kudrow) is so intent on attending this wedding, their relationship to bride Francie Millner (Rya Meyers) nonexistent, ties to groom Douglas Grotsky (Chris Whitley) a weak link to his dad, central Ohio's diner king Henry Grotsky (Andy Stahl, "The Blind Side"). They attempt to begin a conversation with the socially awkward yet perpetually smiling Walter Thimple (Stephen Merchant, "Logan"). Rezno Eckberg (Tony Revolori, "The Grand Budapest Hotel") has been pushed into attending by his mom (voice of Margo Martindale, amusingly tagged 'Mothership' on his phone) to find a woman. The ebullient Jo Flanagan (June Squibb, "Nebraska") is thrilled to have been remembered as the bride's first nanny. What will become painfully clear is that these are the folks at 'the table of people who should have known to send regrets only after sending something nice from the registry.' As Eloise lurks outside the reception hall, she spars with two men. The first is Teddy (Wyatt Russell, "Everybody Wants Some!!"), Best Man and brother of the bride who we learn is the cause of her distress. After two years, Teddy dumped her and took up with former girlfriend Nikki (Amanda Crew, HBO's 'Silicon Valley'), whose taken Eloise's place in the wedding. He demands to know why she's here. As she continues to watch Teddy and Nikki, a handsome stranger, Huck (Thomas Cocquerel, "Everybody Wants Some!!"), asks why she's been staring for a full minute. Sparks fly. Still in a bad way, Eloise unloads to Table 19 and the perceptive Jo figures out something about her others have not (the situation will reverse later in the afternoon). But Kendrick and Squibb are the only actors the script allows full character arcs. The Kepps sputtering marriage is as difficult to care about as Bina's reason for being there, which is both illogical and ugly. Walter is too weird for reality, his invitation as improbable as his background. Rezno, too, is a caricature, his attempt to woo Megan-Ann (Megan Lawless) too broadly comedic. 'Girls's' Loreen Horvath, Becky Ann Baker, is saddled with playing the mother-of-the-bride as a drunken party girl. Russell makes Teddy a dimwitted screw-up, a difficult character to connect with Eloise. Cocquerel's character makes no sense at all, his existence a screenwriter's tool to set up a bad gag's conclusion. The contrivances are hard to shake, like the wedding band still set up and ready to play long after guests have departed or the intimacy of a wedding that had room for its Table 19 in the first place. Blitz pulls an uplift out of his back pocket for the film's climax and its year later happy/sad wrap that may send audiences out of the theater thinking this film was better than it is. But "Table 19" feels like an assembly of underwritten character sketches that had nowhere else to go. Grade: