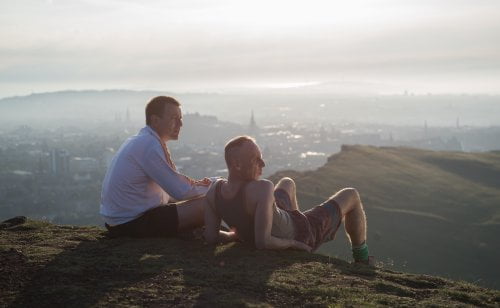 When we last saw this lot, Sick Boy (Jonny Lee Miller), Spud (Ewen Bremner) and Begbie (Robert Carlyle) were passed out as Renton (Ewan McGregor) made off with their £16,000 score from a heroin deal. Now, twenty years later, Renton's just suffered a form of heart attack in the Netherlands where his Dutch wife has filed for divorce, so he returns to his home town, Edinburgh, where not everyone's happy to see him in "T2 Trainspotting."

News that "Trainspotting" director Danny Boyle and screenwriter John Hodge (adapting Ivine Welsh's Trainspotting and Porno) were revisiting the film that had become a Scottish cultural touchstone and global Indie phenomenon was received with skepticism and guarded hope. Have they pulled it off? It would have been nigh on impossible to reach the heights of the 1996 film with its manic direction and drug-fueled debauchery so the filmmakers have retrofitted echoes (and flashbacks) of the first film's groundbreaking style into their tale of middle-aged men dealing with a present shaped by their pasts. One hurdle they haven't leapt is making a standalone sequel, as "T2" won't work nearly as well for those who come to it uninitiated. As if to say 'you can't go home again,' when Renton a tartan clad young woman greets Renton outside of Edinburgh Airport, he notes her accent and asks her where she's from. 'Slovenia,' she replies. After sheepishly checking in with dad (James Cosmo), not having been home for his mother's funeral, Renton first meets up with Spud, still a junkie, having quickly blown through his long ago windfall. He married Gail (Shirley Henderson) and idolizes their son, Fergus (Kyle Fitzpatrick), but although they had a life while he worked construction, the economy dashed his happiness, sending him right back to smack. Renton encourages him to instead 'choose life' by becoming addicted to something else - like running (Spud's struggle to follow Renton up the edge of Arthur's Seat supplies a glorious view of Edinburgh). Sick Boy, now going by his real name Simon, works with his Bulgarian 'girlfriend' Veronika (Anjela Nedyalkova) and her nasty black strap on in a sex tape blackmail operation, recently having bagged the headmaster of a prominent local school. During the day he runs his auntie's down at its heels Sunshine Pub, which is where Renton finds him. Renton is less than joyously received, but Simon sees an opportunity and Renton has ideas regarding his plans to turn the pub into a 'sauna' for Veronika. Soon Spud's installing mirrored tiles, but when Simon's busted for extortion, lawyer fees (welcome back Kelly Macdonald's Diane!) eat up their capital. Meanwhile, Begbie, who's just been denied parole, breaks out of prison and returns to the wife (Pauline Turner, "Young Adam") and son (Scot Greenan, 2015's "Macbeth") who hardly know him. Disgusted by Frank Jr.'s dreams of hotel management schooling, he tries to turn the boy towards thievery, but he's not cut out for it. A grayed bundle of tightly wound rage, Begbie is Renton's ticking time bomb. The plot strands unite through Spud, who finds a muse of sorts in Veronika when she suggests he write down the lads' old stories. 'First there was an opportunity......then there was a betrayal,' he begins, a blueprint for the update as well. Renton's idea to apply for a small business loan for economically depressed areas for the Sunshine (his presentation is a delicious mix of parody and chutzpah) actually works, but two members of the brothel business venture have other plans for their futures. Boyle and his filmmaking team (cinematographer Anthony Dod Mantle takes the reins from Brian Tufano with Jon Harris editing) employ the freeze frames, on screen graphics and druggy camera moves of the first film, collapsing fantasy and reality. Callbacks to Sick Boy's baby, Tommy, Spud-sick, 'Choose life' and the filthiest toilet in Scotland work to varying degrees. Music, so integral to the first film, is front and center here as well, the film blasting off with High Contrast's 'Shotgun Mouthwash,' before offering a mix of old (Queen, Frankie Goes to Hollywood and, of course, Iggy) and new. Stuck in hostile territory they'd hoped to exploit, Renton and Simon improv '1690,' firing up the locals with their chorus of 'no more Catholics left.' Grade: