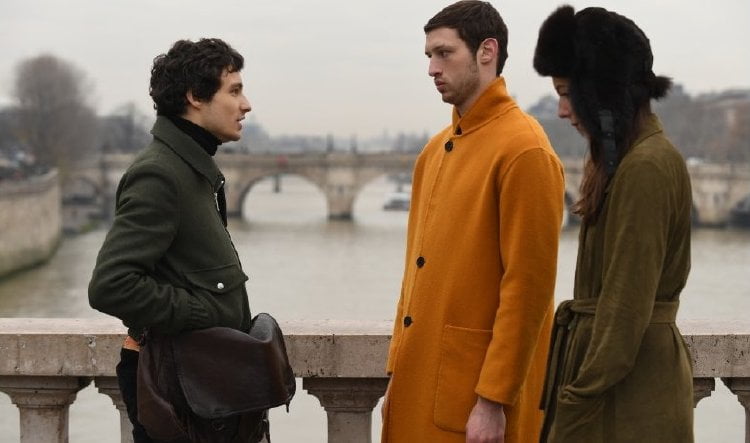 Shortly after completing his mandatory military service, Yoav (newcomer Tom Mercier, an Israeli Tom Hardy) embarks on a mission to erase his Israeli identity, describing the country of his birth with terms such as odious, fetid, sordid, ignorant and mean-hearted, words he mutters wandering the streets of Paris from his French/Hebrew dictionary’s “Synonyms.”

Determined to become French, Yoav experiences a bumpy landing in Paris when he finds the apartment he is to stay in empty, then has his few belongings, including his clothing, stolen as he bathes. He’s rescued by a neighboring young artistic couple, Emile (Quentin Dolmaire, "My Golden Days"), a wannabe writer, and Caroline (Louise Chevillotte, "Lover for a Day"), the oboist for a local orchestra, who give him money and clothing (all subsidized, as are they, by Emile’s father’s corporate wealth) and become friends. But Yoav ends up living in a shoebox, subsisting on the same, cheap daily meal, his income patched together from odd jobs like his ironic employment in the Israeli Embassy’s security department which he quickly loses. When he posts an ad making himself available as an art model, Emile asks if it’s been responded to by an artist or pervert. It’s the latter of course, Yoav more distraught over being asked to speak Hebrew than to sexually abuse himself for the camera. When his father (Yehuda Almagor) arrives at Charles De Gaulle airport, Yoav refuses to speak to him and it is Emile who lunches with the man, Yoav rejecting gifts sent by his mother.

Cowriter (with father Haim)/Nadav Lapid’s ("The Kindergarten Teacher") film is the first Israeli winner of the Berlin Film Festival’s Golden Bear, yet it is one of those types of films that is easier to admire intellectually than respond to emotionally, its protagonist’s motivations so ambiguous we’re left little to relate to. In some ways, the film reflects “Jules and Jim,” the 1962 Truffaut film in which an Austrian author becomes friends with a Frenchman who both become attracted to a woman named Catherine (here Emile offers marriage to Catherine to Yoav to achieve citizenship, unaware that the two have already embarked on an affair and Lapid takes things further by having Yoav ‘give’ his personal stories to Emile). But the primary themes here are about how our nationality plays into our identity and the difficulties in assimilating into another.

Lapid further obscures Yoav’s Israeli loathing by adding friendships with Michel (Olivier Loustau), a fellow soldier who informs him their old commander was in love with him, and pro-Israeli-to-the-point-of-public-confrontation Yaron (Uria Hayik), who is recruited by Michel into a biannual throw down with local neo-Nazis when the two meet. Yoav’s childhood identification with Hector, the Trojan defender of Troy against Achilles, is too weirdly specific. Ironically, it is an assimilation class that turns Yoav on his adopted country. Like Lapid himself, who based his film on his own experiences, Yoav eventually surrenders, symbolically shut out by his adopted country, and returns to Israel.

No matter how mysterious some of Yoav’s actions are, Tom Mercier commands our attention. The young actor, who spends much of the film nude, is all in with a passionately defiant projection of his director’s vision. Lapid conveys his protagonist’s emotional state by switching from shaky handheld camera to smooth pans across the Seine, highlighting important details with back and forth swish pans. Costume also plays into identity, from Yoav’s nudity to Emile’s lent chic colored shirts and mustard yellow overcoat to an overly adorned Israeli military uniform.

“Synonyms” is art house cinema so personal it is occasionally baffling yet also artistically distinct.

Yoav (Tom Mercier) was born in Israel but, deep down in his heart, he knows he is really French through and through. He vows to forgo speaking Hebrew and buys a one-way ticket to Paris and arms with what will be his ever-ready French-Israeli dictionary. Once there, he faces cold, hunger and homelessness but he is undaunted in being French in “Synonyms.”

This reflective autobiography by director and co-writer Nadav Lapid (with co-scribe Haim Lapid) is not the kind of narrative storytelling that will be immediately embraced by the viewer. But, there are some aspects in this tale of delusion and self-importance that peaks some interest.

The story, basically, is about a young Israeli man trying to get away from his past life, and embrace a chosen new one, only to have that past thrust in his face every day. On his very first day in Paris, he goes to an empty, cold and unheated apartment. But, as he showers, someone breaks in a steals all of Yoav meager possessions and money. Naked, cold and all alone, he sleeps in the bathtub and almost freezes. Welcome to France.

A well-to-do neighbor couple, Emile (Quentin Dolmaire) and Caroline (Louise Chevillote) find the unconscious Yoav, take him in and nurse him back to health. The give him clothes, a coat, a cell phone and money and take the refugee under their protective wing. Instead of being the strong and capable Neo-Frenchman, Yoav, without realizing it, becomes an object to be manipulated by his benefactors. The story is about Yoav coming to face what his life really is – and it is not what he ever imaged.

The title, “Synonyms,” comes from Yoav’s constant poring through his French-Israeli dictionary and reciting all the synonymous words that he learns – most are negative. The story, with that in mind, is about a delusional young man who cannot see the difference between his dreams of Frenchness and the reality of being an immigrant with scant chance of living his dreams.