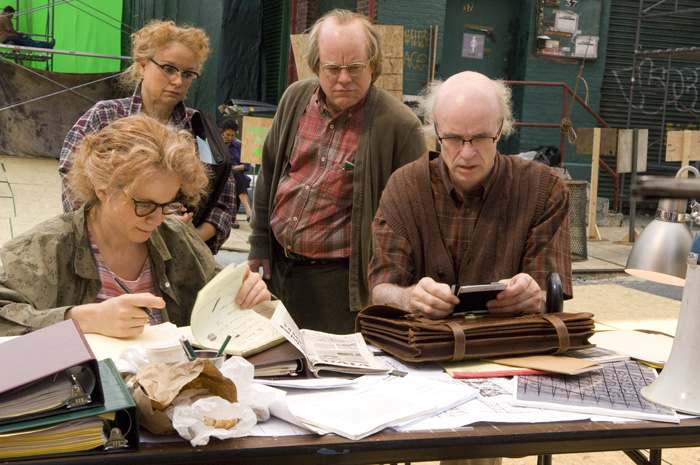 Caden Cotard (Philip Seymour Hoffman, "Capote") directs regional theater in Schenectady. His wife Adele Lack (Catherine Keener, "Hamlet 2," "What Just Happened?") is preparing for a Berlin exhibit of her miniature paintings (which must be viewed with a magnifying glass) and is becoming more preoccupied with her friend Maria (Jennifer Jason Leigh, "Margot at the Wedding") than her physically deteriorating husband. When she tells him she is taking their 4-year-old daughter Olive but that he should not come, Caden begins to form a play about his own life that will consume the rest of it in "Synecdoche, New York."

Writer/director Charlie Kaufman makes his directorial debut with his most ambitious work to date. "Synecdoche" is clearly sprung from the same imagination which brought us "Being John Malkovich," "Adaptation" and "Eternal Sunshine of the Spotless Mind," but where those screenplays reflected on certain aspects of the human condition, this tries to encompasses every aspect of human existence and the tenuous web of connections that mean everything and nothing. An extensive cast of character actors is capably led by Philip Seymour Hoffman in what may initially seem like an intellectual exercise but what is ultimately a very moving film. As Adele emotionally extricates herself from her marriage, Caden is preoccupied with mortality. He finds blood in his stool, pees a brackish brown, has raised veins and facial pustules, undergoes gum surgery and suffers a seizure. Olive tries to identify with a fascination for her green poop, but mom assures her she's fine before whisking her away to Germany. 'Box office' girl Hazel (Samantha Morton, "Elizabeth: The Golden Age," "Control"), who has long carried a torch for Caden (and who, in fact, buys a literal house on fire), finally calls his attention to the fact that his family has been gone for over a year. Caden wins a McArthur Grant and begins to build his vision in a huge abandoned warehouse - an exact replica of his environs and those of the people he interacts with, with Hazel as his constant assistant. Actors are hired to play himself, his loves, and, eventually, even the actors playing the parts until Caden is reenacting his life through a 3-D prism, the play changing the course of his and his troupe's life and vice versa. Kaufman keeps expanding Caden's set, which eventually becomes an entire city of such scope, a blimp can be seen sailing by, and yet Caden is not restricted to his own "Truman Show." He tries to reengage with Adele by becoming her cleaning lady, exchanging notes and gifts under the guise of 'Ellen' (and adding yet another dimension to the depth of personality dilution/acquisition) and travels to Germany to 'save' Olive (Robin Weigert, "The Good German") from Maria, who has tattooed her from stem to stern as artistic impression (Olive 'exhibits' in a peep show booth which Caden tries to free her from, her clientele peering in just like they do with her mother's work, but which no audience has done with her father's). Caden's subsequent marriage to his "Death of a Salesman" star Claire Keen (Michelle Williams, "Brokeback Mountain"), who, as an actress, plays herself, falls apart (enter Kristen Bush replacing Claire as herself) and the man he hires to play himself, Sammy (Tom Noonan, "Manhunter," "Snow Angels"), begins to encroach into real life by falling in love with the real Hazel, despite her presence as played by Tammy (Emily Watson, "Breaking the Waves," "The Water Horse"). Death begins to raise its head first via Adele's aged, addled neighbor Frances (Rosemary Murphy, "The Savages"), and then the deaths begin to mount. Caden loses his own parents (Jerry Adler, "Find Me Guilty," HBO's "The Sopranos" and Lynn Cohen, HBO's "Sex and the City," "Eagle Eye"). A suicide opens Caden's eyes to his true soulmate, but her long smoldering torch has a devastating effect. Millicent Weems (Dianne Wiest, "Dan in Real Life"), a late cast addition brought on to play Ellen eventually takes the directorial reins from Caden as his world begins to crumble. 'When are you getting an audience in here? It's been 16 years,' a player asks as the streets begin to show urban decay. In the end, Caden tries to connect with a stranger, professing love, the connective tissue he's learned is what makes life worth living. Having only seen "Synecdoche, New York" once, I feel safe in predicting it is a work that will continue to reveal itself for many, many repeat viewings. There are so many ideas being expressed in so many ways the experience, while not overwhelming, is difficult to take in in one sitting. After a fairly extensive recap, I have not even mentioned Caden's shrink, Madeleine Gravis (Hope Davis, "The Hoax," "Charlie Bartlett"), and her self help books nor Little Winky, a 4-year-old 'shock' author. Do note all the names at play here as few are without meaning. Production design tends toward the claustrophobic, with Caden's first family home reminiscent of the dark wood established academic house of Jon Savage. Ironically, the exteriors of Caden's enclosed, interior set have the only feel of light and air. The cast is exceptional, and, it should be noted, exceptionally cast. Emily Watson playing Samantha Morton may confuse those less than familiar with English art house actresses as they are such similar 'types' and each of the senior actors bring a different side of melancholia to the whole. Hoffman is superb as the artist who takes his whole life to acquire the wisdom he needed to live it and Morton has never been more appealing. The aging makeup used on the actors is unusually convincing and they supply the rest. As a director, Kaufman maybe could have reined in Kaufman the writer from going down quite so many paths, but he has surely led his cast and crew to his vision. The screenwriter who comments upon the human condition through staged recreations, be it from John Malkovich's brain or the sets of "Eternal Sunshine," has delivered his most affecting work with this flawed masterpiece.