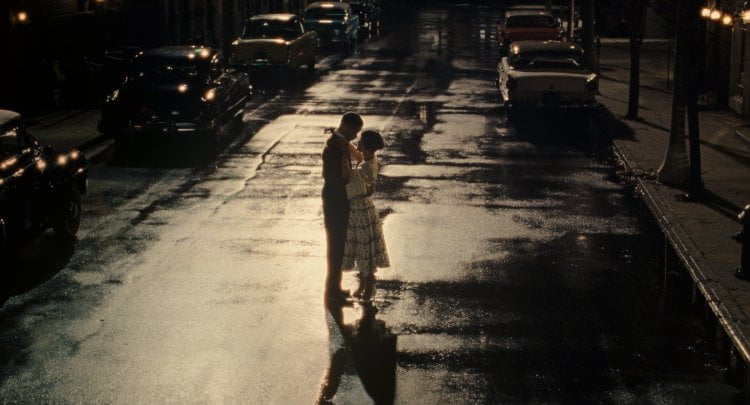 In 1957 Harlem, Sylvie Johnson (Tessa Thompson, "Creed") works in her dad’s record shop while dreaming of a career in television and awaiting the return of her fiancé from the Korean War.  One day, she catches the eye of Robert Halloway (producer Nnamdi Asomugha), the Dickie Brewster Quartet’s talented saxophonist, who uses the Help Wanted ad in the shop’s window to make her acquaintance.  Sylvie explains it’s a prop, her society conscious mom’s ploy to make people think they don’t need her to work there, but her dad, ‘Mr. Jay’ (Lance Reddick, "John Wick") hires the young man on the spot in “Sylvie’s Love.”

Writer/director Eugene Ashe has fashioned a sweeping, soapy old-fashioned romance dripping in old Hollywood style glamour, a milieu star Thompson takes to like a duck to water.  Don’t expect to find any of the socially conscious issue raising often found in Thompson’s film choices here (see “Dear White People,” “Sorry to Bother You”), Ashe’s vision consumed by true love and swoony period settings with mere passing references to racism and civil liberties.  Thankfully, Sylvie’s character features a strong feminist through line in her career, setting up battles with a traditional husband favored by a mother straight out of “The Notebook.”

It doesn’t take long for Sylvie and Bobby to click over their shared love of music.  Bobby enjoys a good laugh catching her dancing with a broom to Bill Haley & His Comets’ ‘See You Later, Alligator,’ which becomes their signature send off.  Accepting an invitation to come and see him play, Sylvie is astonished by just how talented Bobby really is, clearly overshadowing band leader Dickie Brewster (Tone Bell).  Meanwhile the cousin she’s brought along, Mona (Aja Naomi King, "Birth of a Nation"), connects with another bandmate, making for a summer’s fun foursome.

Fate will intervene, of course, the quartet ‘discovered’ by the Countess (Jemima Kirke, HBO's 'Girls') who gets them out of a long term contract to play in Paris just when Sylvie’s learned she’s pregnant.  Five years will ago by until the two cross paths again, Bobby, unaware that he’s a father, having become quite successful while Sylvie married the wealthy Lacy Parker (Alano Miller, TV's 'Jane the Virgin') while becoming an assistant to the Black female producer (Ryan Michelle Bathe) of the Lucy Wolper (a spicy Wendi McLendon-Covey, TV's 'The Goldbergs') cooking show.  More drama will ensue as Sylvie’s promotion clashes with her husband’s unprincipled ambitions while Motown drastically changes Bobby’s career landscape.

One could say they don’t make them like this anymore, but the primarily Black cast of “Sylvie’s Love” makes it a bit of revisionist Hollywood history.  It’s a fine, slightly fantastical romance where sacrificing one’s own heart’s desire is the expression of true love.