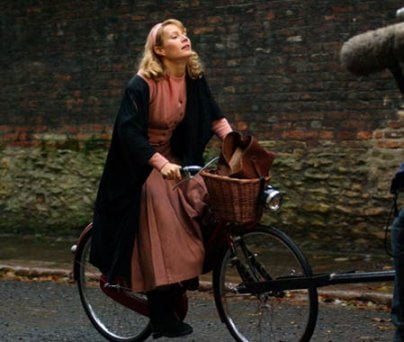 The volatile marriage of American "Bell Jar" author Sylvia Plath (Gwyneth Paltrow, "View from the Top") and British Poet Laureate Edward Hughes (Daniel Craig, "Road to Perdition") is explored in director Christine Jeffs' ("Rain") "Sylvia." 'Dying is an art, like everything else. I do it exceptionally well. I do it so it fells like hell.' These are the first words we hear from Plath, unnecessarily reminding us that her famous suicide is how this film must end. Jeffs' production is evocative of the wintery hothouse environment of British academics, but her subject, Plath, makes us cold too quickly. "Sylvia" gives us little chance to see her bloom, concentrating on the relentless decomposition. As in "Iris," another female author controversially written about by a widowed husband much later in his life, we're thrown into a period English college, the Cambridge of 1956, where an aggressive woman sets her sights on a questionable man. Sylvia targets the reviewer who has called her poetry 'essentially commercially' and 'nakedly ambitious,' her hunger for his dark virility expressed with a literal bite on his cheek. Sylvia is warned that Ted Hughes cannot be tied down, but soon the couple are speed-reciting verses in drinking games and sharing Chaucer with grazing cows. Marriage is followed by a trip to Sylvia's East Coast home where her mother, Aurelia (Gwyneth's mom Blythe Danner, "Meet the Parents"), immediately senses danger in her daughter's new husband. Aurelia tells Ted about Sylvia's suicide attempt - one in which the girl clearly did not intend to be found. The two scrape together a living teaching, but Plath becomes depressed by the female attention her husband draws and her own writer's block, which she hides behind baking and housework. The two return to England, choosing a rustic life in Devon, but Sylvia's jealousies are always near the surface. When she rightly suspects Ted is having an affair with their friend Assia (Amira Casar, "How I Killed My Father"), she leaves him and begins to write tucked away with their two children in a dingy second floor apartment. Her writing champion, Al Alvarez (Jared Harris, "Igby Goes Down"), spurns her attempts at seduction, believing she and Ted are meant for each other. Sylvia does succeed in seducing her husband, but an attempt at reconciliation is dashed when he informs her that Assia is pregnant. After an odd visit with downstairs neighbor Professor Thomas (Michael Gambon, "Gosford Park," providing the film's only laugh), Sylvia tucks her children in with provisions, seals herself in the kitchen and turns on the gas. As written by John Brownlow and performed by Paltrow, there is little dimension to Sylvia Plath. We are instructed vaguely that the woman was traumatized by the death of her father. The courtship with Hughes is too abrupt - we're given no indication why Plath would be the one to engage Hughes and, once married, Plath's insecurities immediately doom the union. "Sylvia" is one big foregone conclusion. Paltrow looks and sounds perfect in the role, but it is difficult, if not impossible, to emotionally connect with the character. (The role seems an odd choice after Paltrow's long mourning for her own father.) She gives juice to only two scenes - when she archly informs Alvarez she means to take him as a lover and when her slow burn ignites a fuse during a dinner in Devon. Craig is surprisingly sexy as the ruggedly handsome writer and certainly gains sympathy, but there is no real passion between him and Paltrow. Best in a small role is vet Danner, the only actor capable of filling in some of the blanks here. The production is first rate all around with John Toon's ("Rain") cinematography contrasting opposing sides of the Atlantic. Sylvia's former middle class life is identified by her childhood Colonial home while English environs are romantically dingy. The sound of wintery winds are used by Jeffs like a score.