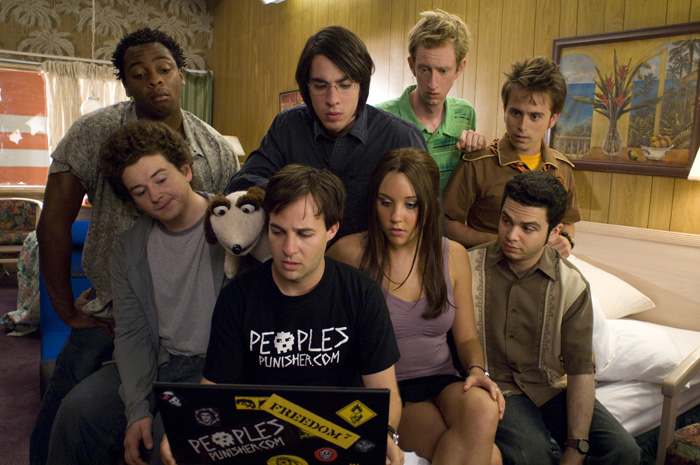 Sydney (Amanda Bynes) is heading off to Southern Atlantic University as a brand new freshman. Her late mom once pledged for the prestigious sorority house, Kappa Phi Gnu, and Sydney has legacy rights to join. However, house president and mega-bitch Rachel Witchburn (Sarah Paxton) just does not like gorgeous, outgoing Sydney and thwarts her chance to become a Kappa sister. Relegated to the rundown Vortex house, with its seven dorky occupants, she decides to help these disenfranchised few take back their campus in Sydney White.”

Think “Snow White and the Seven Dwarves” meets “The Revenge of the Nerds” in this amiable college comedy that showcases Amanda Bynes as the down-to-earth, comic book collecting beauty who comes to SAU to join her mother’s fabled sorority. Rachel, though, sees the pretty frosh as competition for the queen bee seat at the school and enlists the help of her sorority sisters to ban Sydney from Kappa House. Thrown out on a dark and stormy night, she has no place to go and sits on the curb in front of the dilapidated Vortex. The seven denizens of Vortex take Sydney in and treat her with the friendship and warmth she expected at Kappa. The gang of misfits – Lenny (Jack Carpenter), Terrence (Jeremy Howard), Jeremy (Adam Hendershott), Gurkin (Danny Strong), Spanky (Sam Levine) and Nigerian exchange student Embele (Donte Bonner) – are smitten with the sure-handed influence of their new housemate and she convinces them to run for the student council. Meanwhile, Sydney meets Tyler Prince (Matt Long), a handsome, charming (and genuinely nice) frat boy who sees the innately good heartedness of the newcomer to the campus. Tyler, though, was once Rachel’s boyfriend and she sees his infatuation as just one more reason to ban Sydney from Kappa House. Undeterred by Rachel’s snub, Sydney bands her group of seven dorks together and brings the battle for control of the student government right to the Kappa door. It becomes a fight between niceness and snobbery as she campaigns to wrest the campus control of the few in favor of the many less privileged at the school. The battle line is drawn and no prisoners will be taken. This modern telling of the classic fairytale benefits from two things - a good-hearted amiability and Amanda Bynes. The young comic actor easily holds center stage, stoically and good-naturedly suffering through pledge week and Rachel’s spiteful, witchie ways. She wraps herself in the role of house mom to her seven modern day dwarves, who would rather reenact fantasy video games than take part in college life. Sydney’s assured presence, confident exuberance (and good looks) prompts the seven to come out from under their geeky rock to compete against the ruling elite at the SAU. The result is a satisfying little fable that, while it doesn’t break any new ground, squarely hits its femme target audience and beyond. Bynes shows her years of comedic experience (she was one of my several favorite things in “Big Fat Liar (2002)”) as Sydney, undeterred by Rachel, sets out to bring a breath of fresh air to SAU as she fights against the Kappa control of campus life. Unknown to Sydney White and the Seven Dorks, Rachel (with the unwitting help of Tyler) is planning to have the Vortex razed and replaced with a new elitist stronghold. It is up to Sydney and her friends to unite the thus far unrepresented majority and take back the school. Sydney White,” directed by Joe Nussbaum and written by Chad Creasy, is a predictable little teen comedy but one that is so sweetly natured as to keep even the curmudgeon viewer amused throughout. The update on the Snow White fairytale is handled deftly and the supporting cast is a likable assembly of characters with the dwarves well represented by Sydney’s Seven and Tyler coming through as the charming Prince Charming (even with the kiss that will bring Sydney back to do debate battle with Rachel). Sarah Paxton reps the vanity, nastiness and selfishness of the wicked witch of the fable very well, making a bad guy that you happily root against. John Schneider makes a splash in the small role of Sydney’s loving and supportive dad. The rest of the cast gives the film amiable lightness, from the other legacy sister, Dinky (Crystal Hunt), to the construction “wolves” that helped to raise Sydney following the death of her mother. Techs are straightforward with production design, by Mark Garner, showing well the difference between the elitist haves and their luxurious digs and the dorky have nots and their ramshackle and soon to be condemned Vortex. Mark Irwin does a fine, varied job with his lensing with particular attention to Amanda Bynes’s pretty face in extreme close up. (Darn, does that girl have nice pores or what?) Costume, by Beverly Safier, is weird (for the Seven Dorks) but also chic with the sorority hottees decking out for their big soiree. If the audience reaction that I saw is any indication – it was mostly mid teen to early twenty femmes and their boyfriends (who secretly want to check out Amanda Bynes) – “Sydney White” is going to just fine in theaters and, later, on the ancillary market. A feel-good-about-yourself film, it gives heart and hope to the geek in all of us.