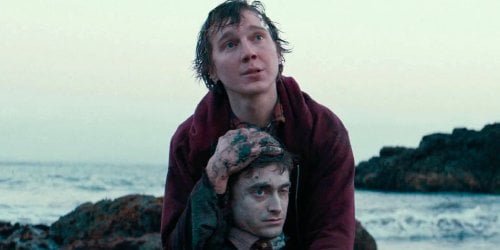 A hapless man, Hank (Paul Dano), is stranded on a deserted island. He is about to commit suicide when he sees a body washed up on the beach. Cheered by the prospect of companionship, Hank is let down when he finds the body is dead. Or, so he thinks. When the body, named Manny (Daniel Radcliffe), speaks to him, he finds a new best friend in the “Swiss Army Man.”

Shipwrecked on a tiny, remote island, Hank (Paul Dano, "Love & Mercy") is about to end it all when he spies another man lying in the surf. But Manny ("Harry Potter's" Daniel Radcliffe) is dead although the corpse's flatulence gives Hank an idea, one that propels them to the coast of the Pacific Northwest. Hank drags Manny to a cave where Manny shows signs of life and proves indespensable as a "Swiss Army Man." You've heard of the unreliable narrator? Music video directors Dans Kwan and Scheinert, who preciously credit themselves as 'The Daniels,' are not content to stop there, proving unreliable filmmakers as well. Radcliffe is to be commended for pulling off a physically demanding role with a sly sense of humor and cinematographer Larkin Seiple ("Cop Car") shoots with stylish flair, but "Swiss Army Man" is the germ of a good idea trampled by Daniels whose love of fart jokes is an overused gimmick that swamps their story. Once ashore, Manny provides Hank with two more potentially life saving items - a bag of cheese curls and a cell phone whose wallpaper is the photo of a lovely young woman. But the phone's only got 10% of its battery life left and cannot pick up a signal. So Hank drags Manny into the woods, settling in a cave. He's in constant conversation with the corpse, talk that turns philosophical when Manny, who revives with no memory of what it's even like to be human, begins to respond. Hoping to jog a past that might help them both, Hank asks Manny whose picture is on his phone. Manny responds anatomically, his penis out of control, and Hank decides to use it as a compass (besides propulsion and navigation, Manny also serves as a water spigot, gun and igniter). He eventually spits out the name Sarah, a woman who shared his bus commute. Hank's constant humming and singing is rewarded when Manny responds to the theme from 'Jurassic Park,' yet he claims to have no knowledge of the film. So Hank ups his psychological game, dressing himself as Sarah, creating a Swiss Family Robinson compound complete with a "Be Kind Rewind" shadow projection 'sweding' of Spielberg's dino flick and a bus with a 'scenery' scroll outside its 'window.' The dependable Dano is convincing as a man fighting for survival on, as it turns out, more than one level, but it's Radcliffe who does the heavier lifting, tumbling and shooting into space as an inanimate object, his subtle expressions commenting upon his predicaments, his words escaping the rictus he's made of his mouth. Production designer Jason Kisvarday and art director David Duarte fashion Hank's ramshackle buildings from sourceable materials, including the inordinate amounts of trash found in the 'wilderness.' The Daniels at least make the latter a point of philosophical debate, but they cheat in other ways, Hank suddenly appearing clean shaved, Manny blinking to life when Hank isn't looking. They also are in desperate need of some self-editing, their final fart joke blowing any real emotional resonance they'd achieved right out of the water. That good idea? Unfortunately, it's impossible to reveal without a spoiler. Let's just say that Manny is one ironic savior. Grade:

“You’ve never seen a movie like this” declares the lobby card of “Swiss Army Man” and, I have to admit, I never have. I fully expected the film to be a clone of 2000’s “Cast Away” with Tom Hanks and got something unique - weird, but unique. If you love flatulence in film, this will appeal to those who enjoy a good fart – or many of them as we have here. Not being the kind of person who does enjoy a fart joke (the only exception is, of course, Mel Brook’s “Blazing Saddles”), things get tedious as we watch Hank descend into delusional madness. There is some deep psychology in the script by co-directors Dan Kwan and Daniel Scheinert (who call themselves the two Dans) but I developed near zero sympathy for the troubled Hank. So, I did not care for the story and how it winds itself up, which seemed abrupt compared to the languid bonding story preceding it. But, kudos goes to Dano and Radcliffe (especially Radcliffe, who had to animate his corpse, Manny) for delivering good, if strange, performances. That is not quite enough for me though.