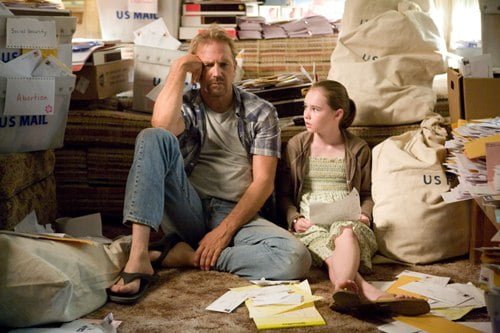 In Texico, New Mexico, Ernest 'Bud' Johnson (Kevin Costner, "Open Range," "The Guardian") is a single dad who drinks too much beer and can't keep his job at the local egg packing plant. His daughter Molly (Madeline Carroll, 2006's "When a Stranger Calls," "Resident Evil: Extinction"), on the other hand, is an exceptional student who has taken on most of dad's responsibilities. When she insists he meet her on election day at the local voting outpost, as much for a school project as for his own civic duty, he doesn't show up, so Molly takes advantage of a sleeping guard to try and file his ballot. The card gets stuck. When incumbent Republican President Andrew Boone (Kelsey Grammer, TV's "Frasier") and his Democratic challenger Donald Greenleaf (Dennis Hopper, "Sleepwalking," "Hell Ride") are tied, the entire country's attention is drawn to Bud who is now the holder of the "Swing Vote."

I've been liking Kevin Costner again ever since his superior Western "Open Range." "The Upside of Anger" was a new kind of Costner character. "The Guardian" wasn't anything special, but it was likable. "Mr. Brooks" was a worthy experiment getting away from the usual form. But with "Swing Vote," Costner has taken a few steps back. The picture's message is admirable and young Madeline Carroll exhibits real acting chops, but the film itself is overlong, horrendously lit, cliched and heavy handed. Costner's Bud swings from a Bill Maher proclaimed 'dumbass' to a man of deep character and thought with little evidence of how he got there besides the daughter he's overlooked all along. Bud is a guy who will tell anyone that Molly is the best thing in his life, but he does everything to disappoint her. He cannot get up to get her to school. He makes promises he does not keep. He leaves budgeting, shopping, cooking and cleaning to her. He drinks on the job and loses it. When the Johnson's ramshackle trailer is visited in the middle of the night by the Attorney General and Secretary of State, Bud doesn't remember whether he voted or not, but cued by Molly he agrees to recast his ballot. The next day, an ambitious local reporter, Kate Madison (Paula Patton, "Hitch," "Deja Vu"), who had broadcast Molly giving an astute essay at school a couple of days earlier, figures out that it is Molly's dad who is holding that swing vote and shows up at his door. Her scoop brings on a plague of media. It also brings the candidates a'courting. Soon Bud and Molly are being whisked to Air Force One by racer Richard Petty and Bud's band is made the highlight of a Greenleaf rally catered with all of Bud's favorite foods (martini glasses of cheese curls are set about, the buffet includes chipped beef on toast). In an effort to win the election, the candidates's campaign managers, Boone's Martin Fox (Stanley Tucci, "Kit Kittredge: An American Girl") and Greenleaf's Art Crumb (Nathan Lane, "The Birdcage," "The Producers") (gee, Fox and Crumb - get it? sigh) push their candidates to change their positions, twisting in the wind of Bud's simple statements. To the filmmakers's credit, the candidates both suffer crises of conscious, but neither is presented as being all that intelligent - they are parodies of the broadest definitions of their parties. After Kate betray's Molly's trust, she comes back to set things straight and the decision is made to end the circus (the locals have begun to turn on Bud and their town is overrun by lobbying groups and merchandisers) by calling for a debate before Bud casts his vote. Bud is given a cram course on the issues then shows up a changed man with the peoples's agenda as his question base. "Swing Vote" is the most obvious of family dramas and even more obvious political satire, even as it herald's the importance of every vote. The writers get a few good messages across using Molly as a mouthpiece, particularly in a bit on history repeating itself as a warning against American complacency. Molly's a good little character, although she's given almost too much maturity and insight, just as Bud's made too irredeemable before a turnaround that could only be explained by possession. Costner's too broad playing the redneck, the conceit not fitting comfortably around his shoulders. Support is uneven, with Grammar giving Boone some semblance of dignity and conscience whereas Hopper often seems a deer in the headlights. Young Shawn Prince plays nicely off Carroll as a shy, budding romantic interest and Patton is solid as the reporter. Nana Visitor (TV's "Wildfire") has bold presence as Greenleaf's wife, but as Bud's ex-wife, Mare Winningham ("Georgia") seems the victim of editing. Her one remaining scene does nothing but emphasize Molly's predicament with Bud and could have easily been excised altogether for run time considerations. Cameos abound from the likes of Willie Nelson, Campbell Brown, Mary Hart, Arianna Huffington and the ubiquitous James Carville and Larry King.