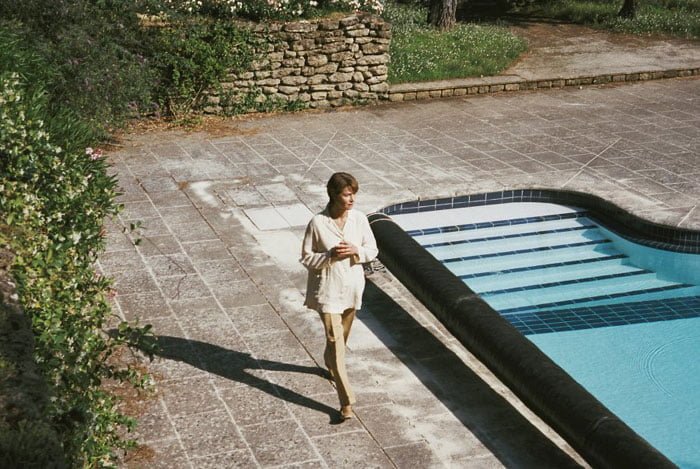 Director Francois Ozon ("8 Women," "Under the Sand") and his cowriter Emmanuele Bernheim ("Under the Sand") once again invite actress Charlotte Rampling into a fantasy land beside a body of water, this time to explore the creative process (although it could be argued that, as in "Under the Sand," loss is also an issue). This puzzle box of a film may have more interpretations than David Lynch's "Mulholland Drive." Sarah is picked up from the train by John's gardener Marcel (Marc Fayolle), then quickly sets up her writing space in a bedroom overlooking the pool before visiting the village to stock up on the yogurt she seems to exist on. When John calls to check in on her, she tells him about new story ideas with the enthusiasm of a girl, but when she asks about his joining her, John quickly withdraws. The tension of a former, unspoken relationship hangs in the air. One night, Sarah hears someone entering the home and descends the staircase armed with a lamp like a character in one of her stories. She is infuriated to learn that the intruder, Julie, has a rightful place in the house as John's daughter. 'You're daddy's latest conquest' Julie assumes before Sarah informs her that she is alone in order to work. Sarah watches the nubile beauty swimming in the leaf-clogged pool and spies on her having drunken sex with one night stands. When Sarah brings copy poolside to edit, a topless Julie attempts a conversation, but Sarah, her gaze having lingered too long on Julie's midriff, bristles (Sarah's prickly nature was established in London, when she refused the recognition of a fan ). But Julie's debauchery has an influence and Sarah runs from her yogurt to a plate of profiteroles in town. She strikes up conversation with waiter Franck (Jean-Marie Lamour) who suggests she visit the ruins of the castle of the Marquis de Sade. Once Marcel cleans the pool at Julie's bidding, Sarah deigns to swim in it, then even invites Julie out for dinner, where she hunts for information about Julie's mother. A folder named Julie is added to Sarah's laptop desktop. After Julie surreptitiously reads some of what Sarah has written, she brings Franck home for drinks and an odd and uncomfortable triangle forms on a fateful evening. Ozon gives us reason to reinterpret what we've seen at the end of his film, but provides no easy answer. There are threads connecting Sarah to Julie's mother and to Julie herself. Franck, a connection between Sarah and Julie, may be a substitute for John and his influence over Sarah's creative output. The director and his cinematographer Yorick Le Saux ("See the Sea") use water, glass and mirrors to reflect and superimpose the women's images and unite them with a pair of identical poolside tracking shots. Julie's confusion about her maternal parentage is repeated when Sarah mistakes Marcel's daughter (Mireille Mosse, "City of Lost Children"), who provides a vital clue about Julie and her mother, for his wife. And of course there's the transference that occurs as Julie's presence loosens Sarah's buttons while Julie eventually becomes more childlike. "Swimming Pool" is essentially a two character piece and Rampling and Sagnier are well matched. The sexy older actress cloaks herself with tweedy British intellectual imperiousness, her embers fed by whiskey. Her hooded eyes are perfect for the voyeuristic nature of the film. Sagnier is unrecognizable from Ozon's last film, where she played the tomboyish little sister. Here she's a wanton wild child, her long, blonde tresses coiled about her head like Medusa. She speaks with the air of rudeness bred by rebelliousness and insecurity until she softens with a child's need. Composer Philippe Rombi's ("Under the Sand") elegantly portentous score gives an edge to the visually calm surroundings. If "Under the Sand" was Ozon's take on one of Polanski's psychological dramas and "8 Women" his ode to John Waters, with "Swimming Pool," the director enters Claude Chabrol territory. B+ Robin: Robin did not review this film.