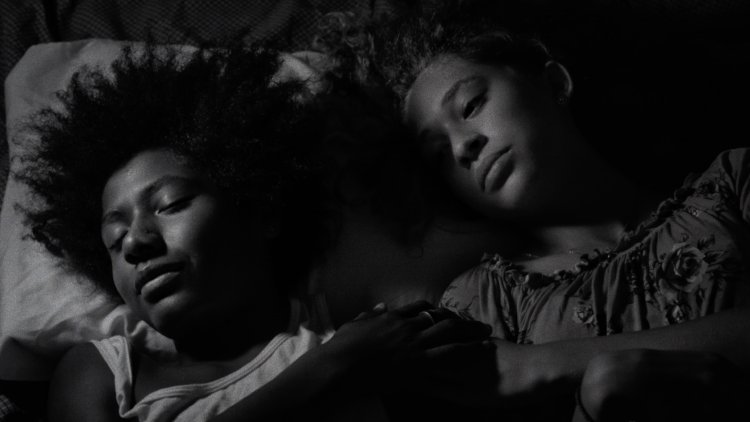 Billie’s (Lana Rockwell, "Little Feet") been keeping her small family together, making sure younger brother Nico (Nico Rockwell, "Little Feet") has a Christmas present as their alcoholic dad Adam (Will Patton) scratches out a living playing Santa and carrying sandwich boards.   But when their mom peels out of a Chinese restaurant parking lot on Christmas Day, dad goes into a deeper spiral that ends with him in involuntary rehab and Billie and Nico must face their next nemesis - their mom’s boyfriend Beaux (M.L. Josepher) - in “Sweet Thing.”

Boston area writer/director Alexandre Rockwell ("In the Soup") still makes films like his early days, low budget, hand-held 16mm b&w (with some fantasy scenes in hazy color) slices of life featuring his own children and if this one doesn’t make a star of his eldest, Lana, the right people aren’t paying attention.  The eighteen year-old plays fifteen here, mature but still a kid who is gifted with a distinctive singing voice ostensibly inherited from her imagined fairy godmother Billie Holiday.

It’s that voice (singing the titular Van Morrison song) that draws the attention of Malik (newcomer Jabari Watkins), another kid from a tough background (mom’s an addict and dad’s in jail), who hotwires a car to take Billie on a jaunt to forget her troubles.  The kids are mostly left to their own devices on a rundown bit of seashore where Billie and Nico’s mom Eve (Karyn Parsons, the filmmaker's wife and Lana and Nico's real mom) has rented a summer cabin to drink the days away with the abusive boyfriend she’s desperate to hang onto.  When Billie gets a slap for bravely stepping up to tell mom what Beaux’s done to Nico, Malik is the agent of their getaway, the trio dubbing themselves ‘outlaws and renegades.’

Rockwell’s screenplay is both formal in following Chekhov’s gun concept (first mentioned in Nico’s letter to Santa) and ramshackle in its embrace of childish play.  The harsh backdrop of these kids’ lives is never soft pedaled yet moments of grace and humor are sprinkled throughout.  Nico is stalked by Darla, a determined young girl set to marry him that he no longer ‘likes’ and whose young brother, an adorable munchkin, is deemed a ‘bully.’  When drunken dad decides its time to trim his daughter’s nimbus of curls, Nico sheers off his own locks in solidarity.  On the road, when the trio meets an old man who shakes too much to light his own cigarette, we expect the worst only to experience a mutual kindness undone by the failings of society.

Lasse Ulvedal Tolbøll’s almost chaotic camera can appear amateurish, but that’s all part of Rockwell’s design, a tumult of childish adventure and adult misbehavior.  It adores Lana absolutely and gives depressing neighborhoods and industrial lots a nostalgic shimmer.  The cast is perfection, from newcomers like the irrepressible Watkins to veterans like Patton, who nails advanced alcoholism while maintaining our sympathy.  An eclectic soundtrack buoys the film which Rockwell wraps with melancholy hope.  “Sweet Thing” is a diamond in the rough.