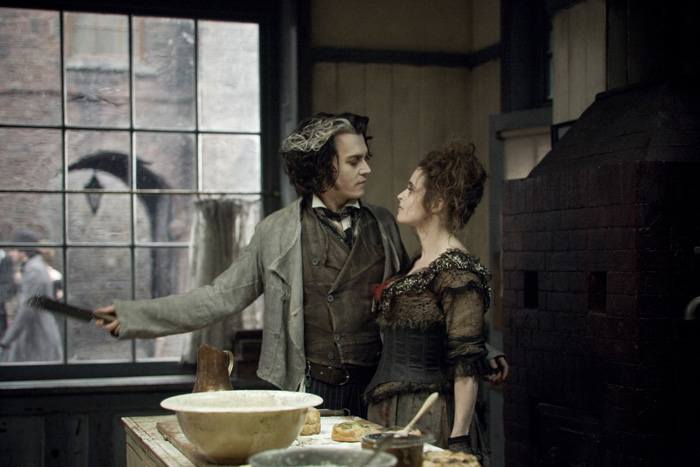 Benjamin Barker (Johnny Depp) once had it all - the young, respected London barber had married the beautiful, pure Lucy and produced a baby girl. But when Judge Turpin (Alan Rickman, "Harry Potter and the Order of the Phoenix") set his eyes on Barker's wife, he was determined to have her and ruined the man. Barker returns years later, rescued from the sea after escaping prison in Australia by young sailor Anthony Hope (Jamie Campbell Bower). He has become a changed man - "Sweeney Todd: The Demon Barber of Fleet Street."

What's black and white and red all over? Production designer Dante Ferreti's ("Gangs of New York," "The Black Dahlia") grim realization of nineteenth century London and hallelujah, Tim Burton is *back*! Perfectly paired with John Logan's ("The Aviator") adaptation of Stephen Sondheim's classically structured but gruesome musical, the director along with favorite star Depp and wife Bonham Carter has realized a sumptuous, emotionally complex work that is equal parts tragedy and Grand Guignol. And Depp just keeps pulling new artistry out of his back pocket - this Oscar worthy performance has not one recycled iota in it - it's Depp's somberest work and his singing voice, with scattered intonations of David Bowie whispering in and out, is perfectly suited to the character. Opening with "No Place Like London," Anthony and Sweeney give opposing views of the city, standing at ship railing as they approach. Sweeney suggests Anthony may find him on Fleet St., then returns to his former home where his landlady of fifteen years prior, Mrs. Lovett (Helena Bonham Carter, "Harry Potter and the Order of the Phoenix"), exclaims over her first customer in days. Amidst flour and cockroaches with rolling pin in hand, Lovett explains how she makes “The Worst Pies in London.” Then she realizes Todd is Barker, gives him back his old room and shows him the straight razors she's kept carefully wrapped all these years ('I could have sold them, but I didn't,' Lovett says in amazement of her own sentimentality. "My Friends" sings Sweeney.). She also informs him of his family's fate - Sweeney's wife poisoned herself after the treacherous Judge forced himself upon her at a costume ball, and he then took the Barkers' baby as his ward. That baby is now the teenaged Johanna (Jayne Wisener), a caged canary Sweeney's savior Anthony spies and sets to woo. Lovett leads Todd to the preening 'King of Barbers, Barber of Kings,' Signor Adolfo Pirelli (Sacha Baron Cohen, "Borat: Cultural Learnings of America for Make Benefit Glorious Nation of Kazakhstan"), whom Sweeney insults and challenges. Declared the winner of a shave-off by Turpin's toadying Beadle Bamford (Timothy Spall, "Harry Potter and the Goblet of Fire," "Enchanted"), Todd sets up shop and waits, first dispatching imposter Pirelli, a Londoner who, recognizing his competitor, threatens blackmail, then the Judge himself. Feeling maternal, Lovett begs for Pirelli's boy Toby (Edward Sanders) in order to form a family, then with barely a breath, solves the problem of Pirelli's corpse - they can grind him up and stuff him in a pie. It has long been debated whether Sweeney Todd and Mrs. Lovett actually existed, but as his legend grew, the story began to take on the revenge aspect that Sondheim worked beautifully into his musical. I saw the original 1979 Broadway show starring Len Cariou and Angela Landsbury and Burton has done absolutely everything right, from taking ten years off the lead characters' ages to casting unprofessional singer Depp and his own wife to his desaturated production design. Director Tim Burton hasn't made a four star film since 1994's "Ed Wood," and has, in fact, been in a serious decline beginning with his "Planet of the Apes" remake, but he positively revels in this material and does proud by it. Cinematography by Dariusz Wolski ("Pirates of the Caribbean: At World's End") recalls his "Dark City" pallet and is musically choreographed without calling attention to itself. Costume design is terrifically gothic. Special effects splatter the screen, Burton's penchant for blood soaking giving the tale a darker edge than it had on stage. Depp is a lock for a second best actor nomination and may well win it this time around, but the more astonishing performance comes from Bonham Carter who melds romantic longing, cold blooded murder, maternal caring and scheming greed into a sympathetic package! She's no slouch in the singing department either, her gleeful witty high notes flying over Depp's more serious lyrics. She can pull the heartstrings as witnessed with young Sanders in their "Not While I'm Around" duet or go all vaudevillian as evidenced in the playful "By the Sea." Sanders is a fine young actor, a hard scrabble street urchin who flourishes with care but keeps his guard up. Rickman has always made for a despicable villain and he's in fine voice here, pairing with Depp for "Pretty Women" and its refrain. Terrific British character Timothy Spall ("Enchanted") better watch out for typecasting, playing the villain's right hand man for the second time in a row in roles that do not particularly set off his talents. Laura Michelle Kelly is an eerie and effective lone Greek chorus as a beggar woman who tries to warn passersby that something wicked this way comes. Here comes a Christmas musical that is not trying to warm the heart as much as rip it out while it's still beating. "Sweeney Todd: The Demon Barber of Fleet Street" is bloody perfect.