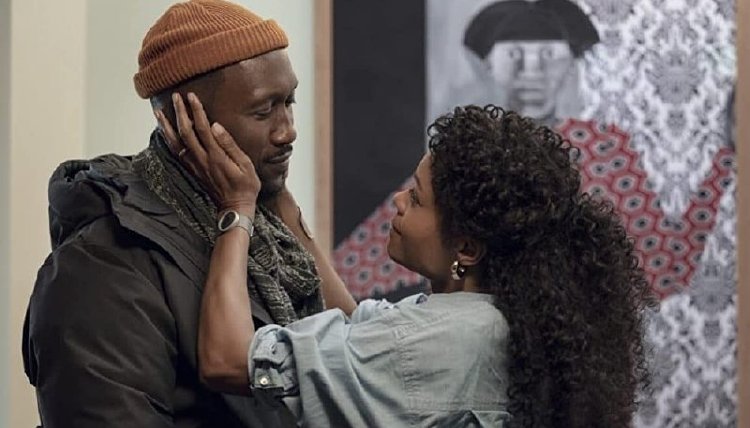 In the near future, a terminal diagnosis is now accompanied with an unusual new option at Arra Labs.  Dr. Scott (Glenn Close) has just proposed this to Cameron Tucker (Mahershala Ali), a relatively young man with a wife, young son and another on the way.  But will Cameron be able to hand his family over to a clone of himself, one with all his memories who will be unaware that he is anyone but Cameron himself, to spare them the grief of losing him?  His is an emotionally complex “Swan Song.”

Writer/director Benjamin Cleary makes his feature film debut with a moral fable wrapped within the genres of science fiction and romance.  The film begins with a ‘meet cute’ between Cameron and his future wife Poppy (Naomie Harris) gradually connecting the dots between then and Cameron’s current quandary, revealing the extenuating circumstances which lead to his decision.

One of the first flashbacks we see of the Tucker family features Hugo (Dax Rey) in conversation with his mom’s twin brother, Uncle Andre (Nyasha Hatendi), about clones, his mom insisting that you could differentiate between a clone and a human.  In an act of present day persuasion, Dr. Scott sends Cameron to a realtor’s office where he meets Kate (Awkwafina), an engaging woman interacting with her daughter at work.  He then meets the real Kate, dying of a terminal disease at Arra.  Kate asks how Kate is doing and Cameron must admit she’s doing fine.

But we can sense there is some underlying issue between the adults in the Tucker household, one which Poppy eventually opens up about in a very moving scene.  All the while, ‘Jack,’ the differentiating name given to Tucker’s copy, is in development at Arras.  Mahershala Ali plays these two sides of himself with subtlety, Tucker wary, Jack supportive yet continually advancing his own cause.  Cleary attempts to inject some suspense into his film’s last act, but while he does so, it rests upon red herrings, one a Nolan-esque identifying freckle never called into play.  Cleary is on more solid ground with human emotions, specifically grief, and the healing power of the creative arts.  A question of medical ethics is raised and hovers over the film’s ending, resolved by inevitability.

The spare, clean design contrasting technologically assisted modern life with the natural spender of British Columbia is reminiscent of Spielberg’s “A.I.” A more intentional homage comes in the form of an origami animal, a tip of the hat to “Blade Runner’s” unicorn.  But while Cleary touches upon clones’ rights, his themes are really love and compassion, however troubling his tale’s conclusion.  “Swan Song” is a love story about sacrifice, but it appears to give itself a free pass on the disturbing moral issue of survivor’s rights.

Cameron (Mahershala Ali) is terminally ill but his wife, Poppy (Naomie Harris), just recently suffered the loss of her beloved brother, Andre (Nyasha Hatendi). Afraid of having her hurt and grieve even more, he seeks out an alternative for when he dies. But, what he is offered brings a dilemma of what is the right (or wrong) thing to do in “Swan Song.”

I have a moral problem with the premise of the story of “Swan Song.” Cameron’s unilateral decision involves a newly developed cloning process that will allow him to replace himself, unnoticed, to spare Poppy grief. But, that decision is based on a lie, deceit and not believing enough in your mate to deal with life and its oft-turbulent problems. I have a major morality problem with that.

I understand that Cameron is trying to be the noble spirit of the family unit and save Poppy from sadness. But, I also thought of how I would feel about perpetrating such a deception on Laura or how I would feel if I were the one deceived. In either case, I could not empathize with Cameron. Sure, I felt a bit of sympathy for his dilemma but also think he cheaped out to make himself feel better – about himself.

Then, there is the psychological destructiveness of commissioning a replacement for yourself and the guilt I perceive that I would feel. I could not identify with Cameron and his misguided ideals. I also had a problem that he is just the third person to take part in this “treatment” with Dr. Scott (Glenn Close in a paycheck performance), the head of the cloning institute. That strikes me as very experimental and leaves many questions in my mind about how things could go wrong and how badly

First-time feature writer-director Benjamin Cleary takes an interesting premise but its exploration is anathema to my own feelings about the story and the main character and his decision.