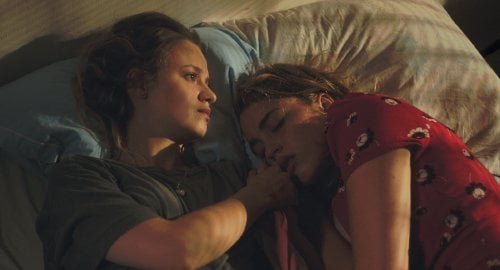 “Suzanne,” by Katell Quillieviere, is a study of a family over the years and the decisions they make. Nicolas Merevsky (Francois Damiens) had to raise his two daughters, Suzanne (Sara Forestier) and Maria (Adele Haenal), alone, after the death of his beloved wife. It has not been easy for him over the years as the girls became women and he had to watch them as they made the mistakes of life, especially Suzanne.

Whether you like the character of Suzanne or not, you do invest yourself in her and question the decisions she makes after meeting handsome Julien (Paul Hamy), a ne’er-do-well charmer. She turns her back on her father, sister and, especially, her young son Charlie, another of her bad life choices that reverberates, not in a good way, to those closest to her. This is a film full of hope and regret. “Suzanne” is just one of the many French films in this year’s Boston’s Museum of Fine Arts 19th Annual French Film Festival that are directed by women. Katell Quilleviere delves into a character study of a family shattered by Suzanne’s bad decisions. Sara Forestier evokes sympathy from me as I inwardly shouted at Suzanne to not do what she does. Even more sympathetic is her father, Nicolas, as we share his love, concern and disappointment for his daughter. The make up job used to age Nicolas over a 20+ year period is some of the best I have seen. The film starts of a bit choppy as the transitions between the years are sudden and confusing. This settles down as the story begins to flow and Suzanne’s life altering mistakes take hold.