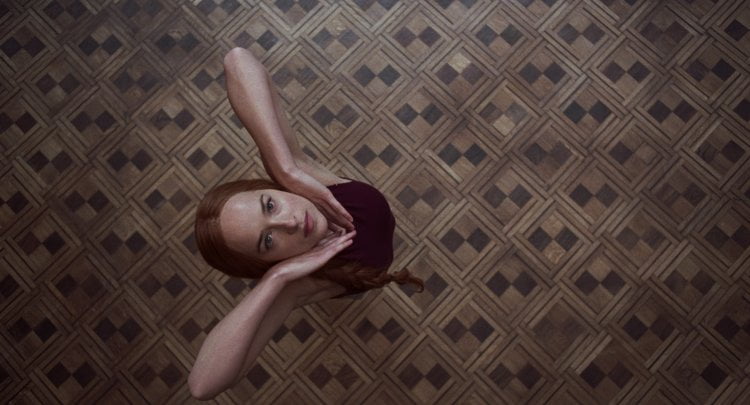 In 1977, Susie Bannion (Dakota Johnson) arrives at Berlin's Helena Markos Dance Company from Ohio and is granted an audition extraordinary not only because of her lack of formal training but by the presence of the company's renowned choreographer Madame Blanc (Tilda Swinton). But when Blanc suggests Susie try the lead with its current dancer Olga (Elena Fokina) in support, Olga leaves, denouncing the dancing 'mothers' as witches in director Luca Guadagnino's ("Call Me By Your Name") updated take on Dario Argento's "Suspiria."

Luca Guadagnino has been dreaming of making his own version of "Suspiria" ever since he saw the film's poster hanging in a town center when he was 10 years old. Is it possible all that time has led to overthinking it? It is almost an hour longer than Argento's 1977 film and while this one actually spotlights dancing (modern dance inspired by such German choreographers as Pina Bausch), much of that time has been given over to clunky subplots that detract rather than add. First the good news. As Madame Blanc, Tilda Swinton is a much more compelling character than the original's Joan Bennett, mesmerizing even as she pulls a curtain across the windows of a recital space. In his debut as a film composer, Radiohead's Thom Yorke has crafted one of the year's most memorable original songs with 'Suspirium' (the score itself, while effective, cannot hold a candle to Goblin's work for Argento). In his coven, Guadagnino features notable European actresses like Ingrid Caven, Angela Winkler, Sylvie Testud and Renée Soutendijk, the first two vets of Fassbinder, whom the director calls an inspiration. Jessica Harper, the original film's star, has a cameo. "Call Me By Your Name" cinematographer Sayombhu Mukdeeprom employs some of the same cheesy zooms prevalent in the 70's. But screenwriter David Kajganich's ("A Bigger Splash") attempt to wrap fascism into the mix with the Baader Meinhof gang in the headlines and the Holocaust haunting one of his characters never connects, their relevance to the witches too vaguely sketched (the original got the idea across more powerfully with its use of architecture). One scene involving two police detectives tips Guadagnino's hand, his upending of Argento's tale laid bare. Flashbacks to Susie's Mennonite past and her dying mother (Malgorzata Bela) don't add up with the film's climax. A plot point from Argento's film, the counting of the 'mothers' steps in the corridor as a means to discovering their secret chamber, is thrown in with no explanation of its purpose. There is no mention of Escherstrasse, Guadagnino's choice of more realistic art direction a denial of one of "Suspiria's" strongest elements. This film's prominent color is brown. Guadagnino's vision had me thinking about Tony Scott's "The Hunger" more than once, Swinton, often regarded as the female equivalent of David Bowie, taking on the character of an old man, psychotherapist Dr. Josef Klemperer, just as Bowie aged in Scott's film (she also plays a third role, hidden under piles of hideous prosthetics as Helena Markos). And when we find out just what happened to Klemperer's patient, the company's missing dancer Patricia (Chloë Grace Moretz), it is a fate comparable to Miriam Blaylock's former lovers. Guadagnino may pull out all the stops for his climax with his blood splashed human configuration of demonic evil, but by that point, I just wanted his movie to be over with. So, a handful of strong elements are wiped out by an overly fussy and confounding narrative and dingy production design. The best thing about 2018's "Suspiria" is that it may inspire those who have not seen Argento's film to check it out. Grade: