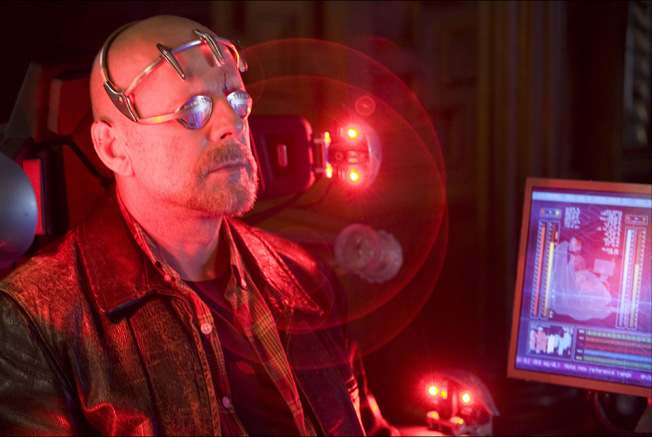 Virtual Self Inc. (VSI), led by genius inventor Canter (James Cromwell), has created a robot that can be controlled by its human owner. Canter’s intention was that his invention would allow the handicapped to be able to experience life, movement and interaction with others. However, the robots proved so popular that everybody has one and face-to-face interaction ceased. Now, though, someone is killing the simulations and, impossibly, their controllers and FBI cop Tom Greer (Bruce Willis) must leave his isolation and find who is killing “Surrogates.”

Based on the graphic novel by Robert Vendetti and Bret Weldele, director Jon Mostow does not create a believable fable but does come up with a quickly paced sci-fi action thriller. Although quite derivative of “Blade Runner” and “AI,” “Surrogates” delivers the goods for the target fans with an interesting robots-run-amok yarn. We meet agent Greer and his partner, Peterson (Radha Mitchell), as they investigate a strange double homicide. Something looks vaguely artificial about the pair and we soon learn that the victims, and the cops, are “surros.” Much more sinister, though, is that their controllers are also killed, an impossibility, or so it was thought. When Greer’s surro is destroyed during the investigation, the real cop must come out of his isolation to get to the bottom of things. The story brings the anti-surro opposition into the fray and Greer must infiltrate their enclave to confront their leader, The Prophet (Ving Rhames). The FBI agent uncovers a conspiracy that pits the faceless, powerful supporters of the surrogates against an unknown force that creates the weapon, the overload device (OD) that can bring down VSI. Things move along in a telegraphed way but the use of copious action, cool weapons and numerous, bang up car chases assures the “Surrogate” audience will be quite satisfied (if the younger demo crowd I saw it with is any indication.) This popcorn thriller has a bit of imagination blended in with the been-done-before action. That is a good thing for those not members of the targeted, 16-24 male demographic.