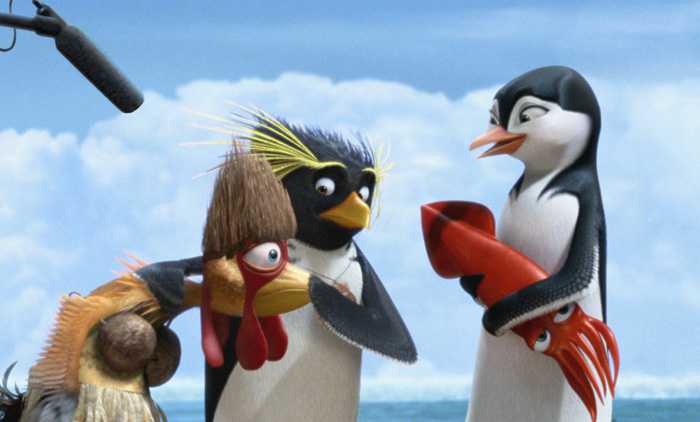 Cody Maverick (voice of Shia LaBeouf, "Disturbia") escapes his dull life in Shiverbrook, Antarctica, by following in the footsteps of his childhood hero, champion surfer, Big Z (voice of Jeff Bridges, "The Big Lebowski"). When Big Z Memorial Surf Off scout, shorebird Mikey Abromowitz (voice of Mario Cantone, HBO's "Sex and the City") swings into town, Cody hitches a ride on his whale and is off to Pen Gu Island in "Surf's Up."

Surfing penguins? The thought smacked of over saturation, a late to the party guest wearing a worn out trend. But surprise, "Surf's Up" turns out to be a small winner, a cute animal animation that works its surfer world with offbeat humor. The story itself is nothing new - a fledgling athlete is taken under the wing of a washed up former champ and learns that the sport is not all about winning. But what makes "Surf's Up" so good is in the detail. The over-caffeinated cartoon character would seem done to death ("Ice Age," "Hoodwinked"), but James Woods and the spindly legs of his character make it seem fresh. Same goes for Jon "Napoleon Dynamite" Heder's Chicken Joe, a goofy stoner rooster whose childlike naivety brings out the goodness in others. Take the native Pen Guans, for example, a group comprised of the funniest cannibalistic movie cliches who start intent on on stewing him and end up forming his fan base. And if the filmmakers are guilty of borrowing, they borrow from the best - witness a Greek chorus of penguin chicks straight out of Aardman's "Creature Comforts." "Surf's Up" also has heart in the relationship between Cody, whose unabashed fandom in discovering the old washed up surfer hidden in the jungle is none other than Big Z turns to teenaged resentment of the big guy's take-it-slow advice, and Z. Bridge's Z is a great character, a sort of Big Bird by way of Big Lebowski, as comfortable as an old couch. Lifeguard Lani Aliikai (voice of Zooey Deschanel, "Elf") is admittedly a bit of a bland romantic interest, but she's given a terrific prop in her expressive squid aquatic propeller and cute subplot in Arnold, a chick who keeps drowning in order to be saved. If there's a disappointment in "Surf's Up's" cast of characters, it is Tank Evans (voice of Diedrich Bader, "Napoleon Dynamite"), a stock bad guy bully who nonetheless helps fuel Cody's character development. Better is Reggie Belafonte (voice of James Woods, "Northfork"), an otter with Don King hair, who is a manipulative promoter with a cute, furry face. Championship surfers like Kelly Slater and Rob Machado appear in avian versions of themselves. The animation itself is top notch, with realistic surfing sequences (lots of beautifully lit tube shooting) and an eerie 'boneyard' of dangerous shore rocks. The penguins are a combination of cartoon characteristics and beautifully realized feathers. The scratched up look of old home movies adds to the appeal, as does some interesting 'hand held' camera work that dodges in and around the characters. If only the filmmakers had employed their reality documentary device a bit more consistently (the camera crew comes and goes at will). Music is a mostly up tempo mix of surfing classics like "Surfer Girl" and "Wipe Out" wedded with complementary pop tunes ("What I Like About You").