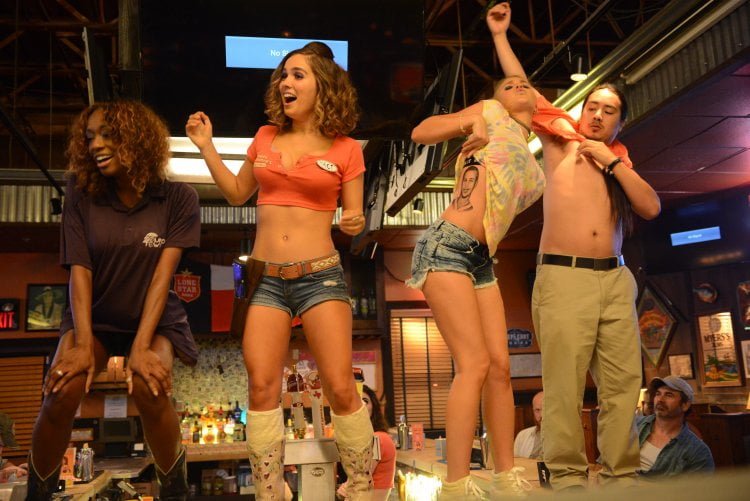 Double Whammies sports bar and grill manager Lisa (Regina Hall) begins her day interviewing and training waitress recruits and ends it on the rooftop of new chain restaurant Mancave. Her day is anything but routine, from the odd contrast of her zero tolerance pawing policy in a workplace requiring breast baring crop tops to the charity car wash she runs on the sly to help out one of her own in "Support the Girls."

Writer/director Andrew Bujalski ("Computer Chess") has been making small, intimate films since 2002's "Funny Ha Ha," two of his last three revolving around relationships in the workplace. His latest features one of his largest ensembles with a career best performance from Regina Hall and Haley Lu Richardson doing a complete about face from last year's "Columbus" in a movie that explores how much of our identities is defined by the work we do. Lisa is a mother hen type of manager, protective of her employees and caring of her customers. She's set apart not only by her uniform, a modest shirt and pants in the same color scheme as her waitresses' far skimpier outfits, but by her all pervasive control of every aspect of Double Whammies. She's in uncomfortable denial about the draw of her run down, generic burger joint, her acceptance of Maci's (Haley Lu Richardson) enthusiastic takeover of new server training (i.e., 'how to work it') sheepish. Lisa's been pulled away by the day's first crisis, an interloper caught overhead in the restaurant's vent system. Whammies' regulars Officers Vollmer (Jesse Marshall) and Dominguez (Luis Olmeda) respond, allowing Lisa to prep for the lunch rush and recruit new hires for her unapproved car wash, assembled on the fly to help Shaina (Jana Kramer), arrested the night before for hitting her abusive boyfriend Chris (Sam Stinson) with her car. She panics witnessing newbie Jennelle (Dylan Gelula) getting a little too into the spirit, much to the delight of that car's driver, but not as much as she does when her boss, owner Cubby (James Le Gros), shows up unexpectedly. Hall's wonderfully warm performance is the picture of resilience under unrelenting adversity. Absolutely nothing goes right for her. Her boss doesn't recognize her worth, the employee she's trying to help is too far into a pattern of abuse to accept, let alone appreciate it and the man she's separating from won't even consider the apartment that she's found for him. She'll have a friendly drink with Krista (AJ Michalka), the woman she's been forced to fire, and cheerlead Danyelle (Shayna McHayle) right into her own job. Yet Shaina and Cubby excepted, we feel the love this woman evokes, even from the taciturn chef, Arturo (Steve Zapata), whose cousin was the guy in that vent. There are so many wonderful small moments here, that Bujalski's film always feels like real life, even on a day packed with exceptional events. Pervy customers, like Jay (John Elvis), the home theater guy from an adjacent store, are indulged. Regular butch Bobo (Lea DeLaria) both enjoys and defends the scenery. Lisa takes no guff from one rude biker, but bends over backwards for others, even stopping to check on satisfaction on her final journey out the door. Cubby gets some kind of comeuppance when his cable goes out and Lisa's no longer around to troubleshoot, Maci jumping on the bar to lead a rowdy distraction shilling 'Big Ass Beers,' but Lisa will find she and Danyelle awaiting auditions after her (hilarious) interview with Mancave's Erin (Brooklyn Decker). The venue may be newer and just as soulless, but these girls support each other. Grade:

Lisa (Regina Hall) is the general manager of Double Whammies, an off-the-highway sports bar where its curvy wait staff is the big draw. She is also the de facto den mother for all the girls in the establishment and loves them and the place. She does not know it, yet, but Lisa is about to have her worst day ever in “Support the Girls.” This femme-centric comedy reminded me of “Coyote Ugly (2000),” a similar story set in a trendy Manhattan bar with a bevy of babes working for their den-mother boss (Maria Bello). That movie stuck in my mind because it was a true ensemble film where everyone not only has a name, but a personality, too. “Support the Girls” is amiable enough but does not take advantage of the potential of the attractive ladies of the title. The film focuses on a day in the life of Lisa as she copes with the various dramas of her girls, abusive customers, her demanding boss, Cubby (James Le Gros), and problems at home with her husband, Cameron (Lawrence Varnado). For Lisa, it is a terrible, horrible, not really good day. Regina Hall is solid as the caring GM of Whammies who struggles with filling the schedule, interviewing new wait talent for the bar and laying down the rules. Rule Number One: NO DRAMA! Unfortunately, drama is a daily occurrence at the bar. Haley Lu Richardson, as the happily enthusiastic Maci, and newcomer Shayna McHayle, as the more cynical Danyelle, are Lisa’s BFFs and stand by her through the thick and thin of her awful day. I think that writer-director Andrew Bujalski, while giving us a solid character study by Regina Hall, missed opportunities to flesh out the background characters to give Lisa’s world more depth. “Support the Girls” is an amiable, hopeful, day-in-the-life tale whose femme-centric cast feels like a family, and I guess that is the point.