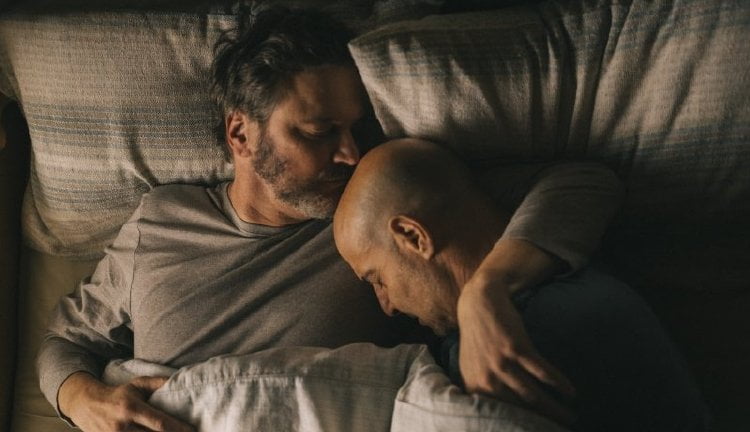 Sam (Colin Firth) is thrilled that Tusker (Stanley Tucci) has agreed to hit the road in their vintage camper touring England’s Lake District on their way to the first piano concert Sam’s given in years.  But a stop at Sam’s sister Lilly’s (Pippa Haywood) in their old family home unveils not only the surprise party Tusker and Lilly had been planning for months, but Tusker’s secret arrangements for dealing with his early-onset dementia in “Supernova.”

Unsettled by personal experience, writer/director Harry Macqueen has created a character driven love story which explores modern issues within the trappings of an old-fashioned tear-jerker.  The road trip scenario really works here, that old Fiat Autotrail Cheyenne giving the film an intimate, character-defining space while the Lake District and the stars Tusker knows so well provide the film a larger-than-life grandeur.

The film’s casting director wisely thought to find friends to play this couple and indeed, Tucci and Firth’s long time friendship gives their onscreen couple that natural feel of a long term relationship, one the actors have invested with palpable romantic love for each other (watch the way Firth is constantly touching Tucci, as if Sam is reassuring himself that Tusker is still there).  This also aids Macqueen’s in media res approach – we believe in and are comfortable with this couple right away, even though we do not yet know where either of them is headed.

Their first stop at a roadside café highlights the playful nature of their relationship, Tusker embarrassing Sam by suggesting he give his autograph to their uncomprehending waitress, which also lets us know Sam’s career has resulted in some sort of fame.  Their next, at a rest stop, informs us of Tusker’s illness when Sam arrives back at the camper to find him gone and panics.  When the two begin to talk about the future, we find Sam wanting to plan ahead with talks of moving and additional help to accommodate Tusker’s decline.  Tusker will have none of it.  This conversation will be revisited on a much more emotional level, Sam’s fears pouring forth, in the film’s penultimate scene.

We learn more about the couple at Sam’s big surprise party, one at which Tusker asks him to read the toast he’d written for him.  The two pair off with various guests, an emotional Sam repairing to their camper where he finds something he wasn’t intended to that forces a confrontation.

If, initially, “Supernova” appears to resemble 2017’s “The Leisure Seeker,” in which a heterosexual couple dealing with dementia take an RV trip, fear not as this one doesn’t rely on contrivances and easy laughs, instead facing hard truths and emotions more honestly.  Macqueen uses his titular analogy in lovely ways, such as Tusker’s party conversation with his goddaughter Charlotte (Nina Marlin).  Having done extensive research on early-onset dementia, the filmmaker errs on the side of not insulting audience intelligence, but he’s chosen a type for Tucker that is enough out of the understood norm (a progressive decline in literary skills, a real issue for a writer like Tusker, but not necessarily extreme memory loss) that a little more explanation would have helped.