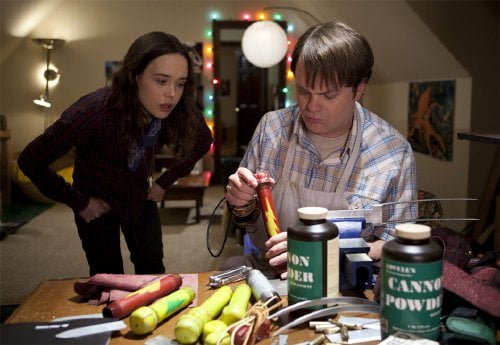 Frank (Rainn Wilson) is an average, happily married Joe - until his former alcoholic/drug addict wife Sarah (Liv Tyler) dumps him and runs away with drug kingpin Jacques (Kevin Bacon). He is deep in the dumps and comes up with a crazy way to get her back. He creates the costume and persona of a brand new super hero, the pipe wrench-wielding Crimson Bolt. He aims to rid the streets of crime, including Jacques, and win back Sarah in “Super.”

Frank (Rainn Wilson, TV's 'The Office') has reminders posted of the two perfect moments in his life - marrying Sarah (Liv Tyler, "The Lord of the Rings" trilogy), a former drug addict, and aiding police chasing a criminal. But when Sarah falls under the spell of drug lord Jacques (Kevin Bacon) and leaves him, Frank, inspired by religious show 'The Holy Avenger,' decides to fight crime to win her back as The Crimson Bolt in "Super." Writer/director James Gunn ("Slither"), who also cameos as the tongue wielding devil to Nathan Fillion's (TV's 'Firefly,' 'Castle') Holy Avenger, has come up with a refreshing spin on the superhero genre. The word 'subversive' is about to get a major workout. Far better than last year's "Kick Ass," "Super" pairs Frank's religiously righteous vigilante The Crimson Bolt with sidekick Libby (Ellen Page, "Juno," "Inception"), a comic book nerd aroused by violence who auditions as The Creeping Bam but ends up as Boltie. Gunn's written dorky dialogue for his superhero leads that they deliver with deadpan intensity. His bad guys, whether it be his own televised Demonswill or Bacon's Jacques define seedy schmarm. And yet he has Tyler play Sarah straight, a damaged angel who elicits real sympathy. Perhaps most amazing is a flashback sex scene between her and Wilson that's genuinely moving. But it is the outrageous violence inflicted on such criminals as movie line jumpers and car keyers that make us gasp. Frank carries a wrench and he's not afraid to use it. Libby is a psychopath unleashed and hot for teacher and Frank works to rein both in, not always successfully. In addition to the off kilter dialogue and unflinching violence, Gunn uses a playful hammer to announce locales (PUBLIC LIBRARY is emblazoned across a librarian's laptop screen, a firearms store boasts a 'Massive Gun Sale' banner) and the 'Kapow' style animation of TV's old 'Batman' series, here splattered with gore. Costumes are hilariously low rent, including the female wig Fillion's forced to wear over his yellow suit, but special f/x are well executed. Wilson is perfectly cast as a loser (he works as a short order cook in a diner) who couldn't believe his luck until he lost it and turns to God. Ellen Page has never been better, letting her inner nerdy nutso out, but completely in keeping with the tone of Gunn's film. This role must have been as physically demanding as "Whip It," whether she's doing cartwheels or waggling her butt to entice Frank. "The Wire's" Andre Royo adds some amusement as Frank's lazy coworker Hamilton and "Henry: Portrait of a Serial Killer's" Michael Rooker plays one of Jacques' henchmen. With "Super," you could conjecture that Gunn's making a statement about how religion spawns violence, but the film's too much fun to go there, even with its Christian values front and center. This pitch black comedy is destined for cult status.

Preparing to graduate high school, best friends forever Evan (Michael Cera) and Seth (Jonah Hill) must face the prospect of continuing their higher education at different colleges. On the eve before they part company, they will undergo a rite of passage that will change their lives forever in "Superbad." Judd Apatow, the director of comedy hits "The 40-Year Old Virgin" and "Knocked Up," sheds his helmer's hat and dons the producer's cap in this rowdy, sometimes raunchy, coming-of-age tale. He turns the helm of "Superbad" over to sophomore director Greg Mottola ("The Daytrippers") to tell Evan and Seth's adventure on what will likely be their last night together as inseparable best friends. Evan is a shy young man who lives in terror of his future, alone and without his friend. Seth is a foul-mouthed teen obsessed with sex. When these outcasts are unexpectedly invited to a big party (where Evan agrees to purchase the booze for the soiree for pretty Becca (Martha MacIsaac)), they begin a night of sober awakening and panic as they strive to fulfill the promise. Of course, neither is old enough to buy liquor so they enlist the help of another, even geekier, pal, Fogell (Christopher Mintz-Plasse). Fogell announces that he is getting a fake driver's license that will allow him to get all the alcohol they need. The best-laid plans often go awry, though, and the trio is in for a night to remember. When Fogell sets off to buy the beverages that will get them into the cool party he is not prepared what will happen when a robber sticks up the liquor store and knocks him cold. The police, in the persons of Officers Michaels (Seth Rogen) and Slater (Bill Hader), arrive at the crime scene and question McLovin (that's the name on the fake ID). They love the name so much they take the youngster under their wing, driving around in their squad car and taking in some impromptu target practice. Meanwhile, Evan and Seth, not expecting Fogell to come through, experience their own trials and tribulations trying to get their hands on the forbidden booze. Think "Porky's" melded with "Fast Times at Ridgemont High," with "Superbad" taking the foul language and obsession with sex of the former and the coming-of-age scenarios of the latter. The resulting work has the rudeness and charm that has not been a part of teen movies for a long time. The unlikely duo of Evan and Seth are two sides of the same coin and the young actors play their roles well. But, the real surprise is the debut performance of Christopher Mintz-Plasse as Fogell/McLovin. His part in "Superbad" frequently steals the show as he cruises the streets with his new cop buddies. "Superbad" seems too old for its targeted teen demographic. Not mature, mind you, but aimed at the older tweenies who will get a kick out of characters that populate the comedy. Written and executive produced by Seth Rogen and Evan Goldbeerg, it holds much akin to the buddy/roommate part of "Knocked Up." And, that is not a bad thing.