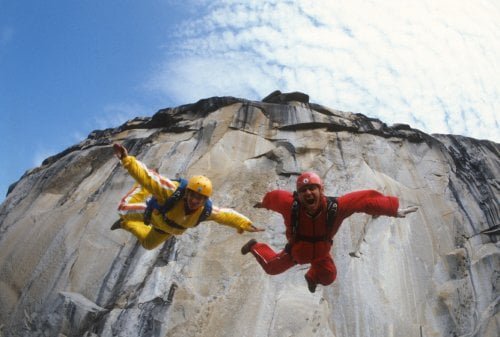 Back in the 1970's, skydiver Carl Boenish initiated the sport now called BASE (Building, Antenna, Span, and Earth) jumping as a spiritual journey to push human boundaries. The sport was considered insane, but Carl found both a life and sport partner in his wife Jean. Carl was also first and foremost a filmmaker who chronicled his adventures. Everyone who met him never forgot his infectious enthusiasm. He was a "Sunshine Superman."

Writer/coeditor/director Marah Strauch got into BASE jumping through her uncle. The freedom and joy she experienced from the extreme sport inspired her documentary, which she fashioned as a love story because of the parallel emotional highs. Her work uses Boehnish's footage, present day interviews and artfully employed recreations for a documentary that tells the story in the voices of those early pioneers. If you go into this thinking these people are crazy, you'll probably still feel the same way after watching their exploits, but you'll also gain a respect and understanding for those who would fling themselves off a cliff. Carl Boenish was an electrical engineer who worked for Hughes aircraft. Once he got into skydiving, a sport he always paired with filmmaking, he yearned to spend more time in the sky. As L.A.'s only aerial photographer at the time, he was offered a job on John Frankenheimer's "The Gypsy Moths" and never looked back. Carl began to think about alternative forms of skydiving and got a group together to launch off of Yosemite's 3,600 ft. El Capitan, astounding park rangers who, for a time, even began issuing permits for the formerly illegal activity. Watching Carl's footage, one is struck by the fact that his filming techniques were even riskier than his actual jumps, Carl sitting on a bicycle seat extended off a cliff on a twenty foot aluminum pole with nothing beneath him. The 40 year-old nerd was loved by all who met him, but wasn't exactly a ladies' man. When he showed one of his films to a college crowd though (and this is the type of thing Strauch recreates without showing the faces of her stand-ins), he caught the eye of Jean. When she expressed interest in trying the sport, he said he'd pick her up and take her to Yosemite. The duo, who confounded most with their disparate personalities (Jean was pegged as a nun or librarian), were in perfect sync from that day on. After trying such stunts as stilting, handstanding, skateboarding and pogoing off El Capitan, Carl and his bride got together with fellow jumpers Phil Smith and Phil Mayfield to create a new organization and BASE was born, membership contingent on jumping off a building, an antenna tower, a bridge and a natural formation. Their exploits caught the attention of media, police and business owners whose facilities were being trespassed upon, the only illegal aspect of the new sport (those who've seen "Man on Wire" will see parallels here). His fame spreading via talk shows and newspaper articles, Carl was approached to set a world record for a David Frost special and decided on Norway's Trollveggan. He and Jean would make the jump as the whole world watched. But while some had forebodings, the two were successful. Jean hadn't, but she did the next morning when, exhausted, she argued with her husband when he told her he was going for another try. What happened was eerie, tragic and even mystical. Strauch has made a nonfiction film with all the elements of a romantic adventure, her pacing tight, the movie expertly edited to build the story like a thriller. The many incredible jumps we witness are accompanied with classic rock hits of the era. Strauch leaves a few questions unanswered, such as what the media's reaction was to Jean's seemingly unemotional reaction to her husband's death and how she has spent her time since, but as a celebration of Carl she goes out on the highest note possible, a wingsuit jumper gliding off Trollveggan to The Hollies' "The Air That I Breathe." It's simply spectacular. Grade: