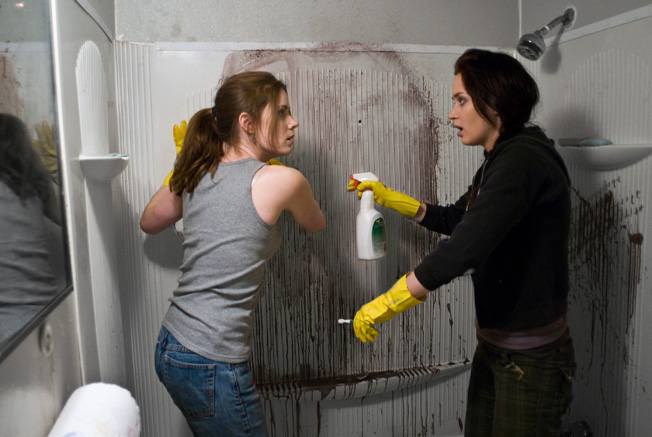 Rose (Amy Adams) is a single mom eking out a living for her and her precocious young son, Oscar (Jason Spevak), working as a house cleaner. Jason has trouble in school, though, and, if he is to get the education he deserves, Rose has to pay for private school. Her boyfriend, Mac (Steve Zahn), a homicide detective, suggests that she can make good money cleaning up crime scenes. Unsure, at first, she enlists the help of her slacker sister, Norah (Emily Blunt) to help her start up “Sunshine Cleaning.”

Rose Lorkowski (Amy Adams, "Enchanted," "Doubt") is a single mom carrying on an affair with the father of her child, Albuquerque police detective Mac (Steve Zahn, "Riding in Cars with Boys," "Rescue Dawn"), now married to another of their old high school class. Embarrassed by her job as a maid and needing money to get misunderstood Oscar (Jason Spevack, "Hollywoodland") into a private school, Rose takes Mac's advice to get into the lucrative crime scene clean-up biz and so teams up with her younger, slacker pothead sister Norah (Emily Blunt, "The Devil Wears Prada") and creates "Sunshine Cleaning." Kiwi director Christine Jeffs who made an auspicious debut with coming-of-age tale "Rain," then faltered a bit with her biopic "Sylvia," takes a totally different tack with her first U.S. set film, a sunny family comedy on the outside with serious contemplations on loss and grief on the inside. Competition winning writer Megan Holley slowly fills in the blanks that define her compelling characters's behaviors and Adams and Blunt are a terrific match-up of sisters who have had radically different reactions to early childhood trauma. Rose is a caring, hard working woman who feels left behind when she sees the McMansions the girls she went to school with now live in. The formerly enviable cheerleader who went with the star quarterback (Zahn is a little difficult to picture in this role) was hampered with the responsibility of a child before she could spread her wings. Sister Norah is unemployed, lives with their widowed dad Joe (Alan Arkin, "Little Miss Sunshine") and likes to party when she isn't babysitting Oscar during Rose's assignations. Mac cuts Rose off short when she calls him at home to discuss Oscar, but when he responds to a suicide scene (which Jeffs has used to open her film with a jolt) and overhears the cleanup crew discuss a $3 grand tab, he suggests Rose switch her cleaning focus. Rose and Norah start off rough, not understanding regulations, but soon Sunshine Cleaning is a legitimate business with employees who also respond to the people whose lives have just been shattered. In one lovely scene, Rose sits outside with an elderly woman whose husband has committed suicide - a trip inside the home tells us everything we need to know about why, a sacrifice made for a loved one. At an early job, Norah cannot bear to throw away a woman's pictures of her child and searches that child out, projecting Lynn's (Mary Lynn Rajskub, "Punch-Drunk Love," TV's "24") experience onto her own, which is revealed by Jeffs at her film's mid point. Norah's slowly revealed need for her mother is a complication in her relationship with Rose, one which comes to a dramatic head. Not everything about "Sunshine Cleaning" works. Alan Arkin's eccentric grandad, a get rich quick schemer with poor judgement, is basically a mashup of other roles, a bit of typecasting if you will, and Rajskub's subplot, while illuminating Norah's psychology, isn't as well integrated into the film as it could be. Zahn is miscast as the fought over object of affection (Robert Redford's daughter Amy plays his wife) and doesn't give us insight into his own feelings on the matter. However, support from Clifton Collins Jr. ("Traffic," "Capote") as Winston, the proprietor of the janitorial supply store Rose and Norah frequent, lends the film all kinds of character. Here is a man who provides Rose with helpful advice and moral support, whose model plane hobby is admired by Oscar in light of his one-armed handicap but whose ability to braid his long hair is never commented upon. Winston is obviously a future romantic pairing for Rose without ever being obvious, or even worse, quirky at all. And so, we have a film in which a grandfather deals with the loss of his mate, a woman deals with the loss of a lover while her sister is still grappling with the death of their mom. In going to work in situations where loss is more than just immediate but physically evident, the Lorkowski family heals. "Sunshine Cleaning" is the second film I can think of to take on the profession of crime scene cleanup, but where 1996's "Curdled" was a bad film that used its subject for exploitation, Jeffs has somehow made it melancholy and profound. Norman Greenbaum's oft-used "Spirit in the Sky" is a fitting send off.

“Sunshine” in the title and Alan Arkin as the grumpy grandpa has to let you know that the producers of “Little Miss Sunshine” have a hand in this mildly amusing comedy about two sisters trying to make a new life with a most unusual career choice. Crime scene cleanup is not the storyline I would choose for a comedy but director Christine Jeffs and her stars, Adams and Blunt, take it and run with it. The problem I have is that there are too many plotlines winding around the central tale, often detracting from it. Adams and Blunt have good sister chemistry in what is also a parent-child relationship for Rose. Alan Arkin does just what you expect as the grandfather who always has a get rich quick scheme brewing, even though they always fail. Jason Spevack does a pro job as Oscar, providing the requisite wisdom that everyone thinks means he has “special needs.” Steve Zahn, as the philandering cop, is there only to give the cleaning business a believable (sort of) note. There are too many side stories cluttering things but there is a good deal of familial heart in “Sunshine Cleaning.” Grandpa’s latest caper is pointless and Rose’s affair with Mac is simply a device to move the story forward. Techs are solid.