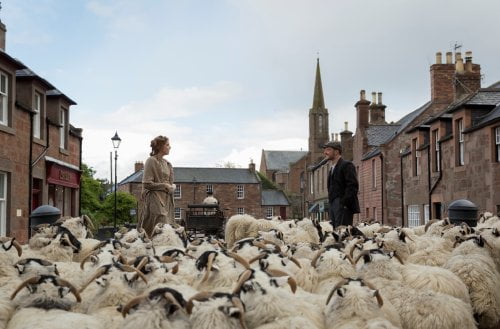 Just before the start of the Great War, Chris Guthrie (Agyness Deyn) is a pretty Scottish teen growing up on the farm of her tyrannical father, John (Peter Mullen). She loses her mother to suicide, after a particularly painful and prolonged birth of twins, and becomes a virtual slave to her father – until he suffers a debilitating stroke. She realizes that she must take control of her own life if she is to be happy in “Sunset Song.”

Chris Guthrie (Agyness Deyn, "Clash of the Titans") grows up on a rural farm in Scotland witnessing the tyrannical rule of her God-fearing father John (Peter Mullan, "Tyrannosaur," Sundance's 'Top of the Lake'). When he's not beating older brother Will (Jack Greenlees), he can be heard forcing his wife Jean (Daniela Nardini) into performing her marital duties. When brother and mother find their own ways out, Chris's love for the land keeps her grounded even as WWI's reach threatens her new life with husband Ewan Tavendale (Kevin Guthrie) in writer/director Terence Davies' ("The Deep Blue Sea") adaptation of Lewis Grassic Gibbon's classic novel "Sunset Song." Throughout his career, Terence Davies has celebrated the endurance of the British people, women suffering brutality at the hands of men who often struggle with economic hardship. His cinema arouses an aching nostalgia for places and dimly lit spaces where people often share songs. With "Sunset Song," he and cinematographer Michael McDonough ("Winter's Bone"), whose interior shots evoke Vermeer, embrace the land itself with windswept views of wheat fields and distant mountains (exteriors shot in New Zealand and Aberdeenshire, Scotland). After dreams of becoming a teacher die along with her mother and infant twin brothers, her paternal aunt, Janet (Linda Duncan McLaughlin), arrives to take her younger brothers back to raise in Aberdeen. As Chris toils alongside her father, we come to see a lot of Far from the Madding Crowd's Bathsheba Everdene in Chris Guthrie. Deyn gives the young woman a poetic sense of wonder about the world around her, but also backbone and a fierce intelligence. When her father suffers a stroke, she's told she'll need to spend much time caring for him, but when even in his weakened state he attempts to exert his will over her, Chris finally takes a stand against him. After his death, Aunt Janet and Uncle Tam (Ron Donachie, "Filth") return, convinced that they will take their niece (and her inheritance) under their wings, but instead are surprised with resistance. Chris will stay at Blawearie, running the farm herself. When two horses flee in terror during a ferocious evening thunderstorm, Chris runs through the fields to bring the beasts back home. She's aided by neighboring farmer Ewan Tavendale, who begins to court her (they meet again in the village, a flock of sheep parting like the Red Sea around them). Chris sings 'The Flowers of the Forest' at their candle lit wedding party. Their marriage is blissful, but when Ewan and his friend Long Rob (Douglas Rankine) are declared cowards for not enlisting in the Big War, Ewan gives in. The man who returns from military training is a drunken brute, departing for the front without farewell. In voice over, we hear Chris say that 'There are lovely things in the world, lovely, that do not endure, and they're lovelier for that,' the film's leitmotif. The character suffers loss throughout the film, yet remains hopeful, her heart in the land which will always be there. There is much ugliness in Chris's Calvinistic father, yet she remembers him with love for the things she never knew about him. His funeral is portrayed with villagers coming together in the fields on their way to the gray stone kirk like streams merging into a golden river. There is sadness earlier at Will's leaving, but what lingers is family friend Chae Strachan (Ian Pirie, "Les Misérables") singing 'Spanish Ladies.' He'll be the one to tell Chris news of Ewan on the Belgian front. If there is a fault with the film, it lies within its third act, which cuts between Chris at Blawearie and Ewan during war. Davies' wrap is abrupt, his pacing more jagged. Yet even here, despite additional tragedy and broken promises, Chris's heart is true, her understanding of her husband enlightened. "Sunset Song" is as achingly beautiful as the mournful bagpipes which play us out of its harshly bewitching world. Grade: