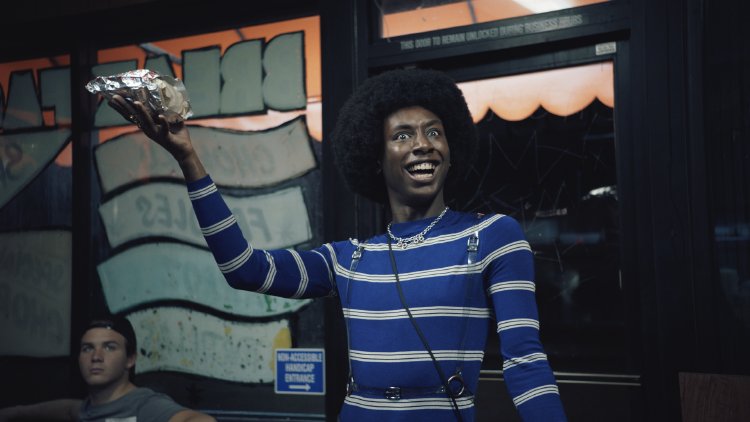 One morning in July, Olympia shares a picture of a beetle squashed on a Koreatown sidewalk on social media, her spoken word poetry elevating it into a work of art.  She then picks up her guitar and roller skates down the pier towards Los Angeles, where her life will become intertwined with a homeless Yelp reviewer, an aspiring rapper duo, gay women harassed on a bus, an insecure stalker, a graffiti artist, a fed up fast food worker and many more living in L.A. in “Summertime.”

Director Carlos Lopez Estrada (“Blindspotting,” “Raya and the Last Dragon”) attended a Get Lit: Words Unite spoken word poetry event and was so impressed with the young artists he invited them all to weave their visions together into one narrative film.  If this doesn’t sound like your cup of tea, neither did it mine and yet it is all kinds of wonderful, a movie that had me grinning throughout.

While the individual spoken word poets, rappers and singer/songwriters all have unique voices and individual talents, Estrada has made the whole work beautifully, cinematographer John Schmidt’s camera shifting focus from one subject to the next with pans and zoom, editor Jonathan Melin occasionally stepping in to cut to a new scene entirely.  What’s even more delightful is that once introduced, these characters don’t speak their piece and leave, instead popping up in other character’s main stories like supporting players or, as is the case with Marquesha, a therapy patient highly amused by her therapist’s book about rapping away your demons, teaming up with a previously seen player as mentoring support.  Another brilliant bit of connective tissue is found in subject matter as Paolina, a woman enduring a judgmental lunch with her mom, overhears rappers Anewbyss and Rah (Bryce Banks and Austin Antoine) over her friend’s phone as they shoot an outdoor video celebrating their mothers.

Anewbyss and Rah comprise one of the film’s main through lines as rappers we meet begging for attention on a city street who, over the course of the day, gain a producer, record in a studio and eventually enter a fast food burger joint like conquering heroes, arriving in a super stretch limousine.  The duo is engaging and funny, their ‘story’ the film’s most fantastical element.  Another constant is Tyris, the Yelp reviewer with singular style (he looks like an alternative ‘Where’s Waldo?’) who rages against overcharging hipster establishments while celebrating the city’s more homegrown businesses.  We don’t learn about his own situation until near film’s end when, at that same burger joint, Tyris is finally rewarded with the cheeseburger he’s been searching for.  It also happens to be free, as declared by Gordon Ip, the fed up fast food worker who declares a revolution before being gifted the rappers’ limo for the night.  Another performer who makes a strong impression is Mila.  The former Youth Poet Laureate of the West Coast takes on a bus rider who objects to a senior lesbian couple’s public affection with ‘I’m Gay Like…,’ a rousing poetry slam that receives a standing ovation as the offended passenger slinks off the bus.

Some characters provide more atmosphere than narrative, like the young busker who opens the film, reappearing at dusk to sing.  There are group numbers, too, like a side trip into a Korean restaurant kitchen where all the workers groove to music on their youngest colleague’s iPod or the red dress dancers who appear in Paolina’s imagination defiant in front of a grocery store.

The film’s energy dips ever so slightly in its very final stretch as characters gather to observe fireworks over the city.  But it’s been a long, eventful day full of stories, some painful, many joyful, all coalescing into a portrait of Los Angeles by the people who make it hum.  “Summertime” is a triumph.