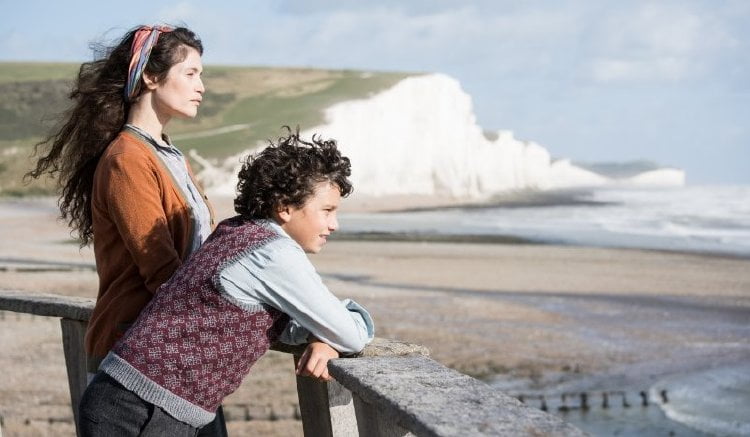 During WWII in an East Sussex town set on white seaside cliffs, a reclusive, misanthropic writer who researches and debunks folklore is harassed by area children who regard her as a witch.  When a woman knocks on her cottage door one day, Alice (Gemma Arterton, "Their Finest") Is incensed to learn she is expected to take in Frank (Lucas Bond), a 14 year-old London evacuee.  She does so begrudgingly, swearing that the measure is only temporary, but Alice is surprised when Frank’s curiosity – and acceptance – makes her confront her past in the magical present of “Summerland.”

Writer/director Jessica Swale, a playwright making her feature filmmaking debut, casts the female stars of her ‘Nell Gwynn’ in a love story which would have been considered radical even in its bookending 1970’s time frame and makes it work, the film’s themes of grief, loss, motherhood and magic creating an environment of compassion and acceptance.  While Swale’s construction leans towards the obvious and her third act tragedy rather callously sets the stage for her happy ending, her ingenious use of the Fata Morgana phenomenon shakes her protagonist out of her self absorption and lifts her tale into the realm of wonder.

A 1970’s set prologue featuring ‘Downton Abbey’s’ Penelope Wilton as the older Alice is actually dishonest, setting up our expectations for a woman who does not change during the course of her 1940’s summer.  Telling some children at her door collecting for charity to ‘bugger off’ does provide a segue into the past, though, where Alice is bedeviled by schoolboys stuffing detritus into her mail slot.  This will also explain why the town recluse never received the letter informing her of her arriving charge.

Alice is reluctantly shamed into taking Frank (during the WWII Blitz, children from the cities were evacuated to the country to be out of harm’s way – my mother was one of them, evacuated from Glasgow).  She points him towards a bed and gives him a plate with a piece of bread, slice of ham and a raw egg for him to cook for himself.  At school, he is also initially rejected by his female seatmate  Edie (Dixie Egerickx, "The Little Stranger"), who draws a dividing line down their desk, but it will become evident that it is his hostess which is the problem as Edie becomes Frank’s only friend, scampering about the seashore until Alice comes on the scene.  When Frank’s relationship with Alice begins to change, first when his questions about her love life reveal it was a woman, Vera (Gugu Mbatha-Raw, "Fast Colour," "Motherless Brooklyn"), who had captured her heart, then when she realizes he’s confirmed her Fata Morgana theory, it will be Edie who challenges Alice when she commits a lie of omission.

Arterton has never been better than she is here, committing fully to the role of town ‘crazy lady’ while inviting us in to the pain which has painted her in this light.  Bond is also very convincing as the quiet boy whose imagination, sparked by the oddities in Alice’s home, gives him the bravery to surmount her defenses.  The film also features British veteran Tom Courtenay as the school’s head, Mr. Sullivan.  Swale’s production is delightful, her location between Dover and Ramsgate the perfect setting for magical castles in the sky, an effect pulled off with a delicate touch.  Costume and hair is also not only period perfect across three separate decades, but beautifully defines Alice’s nonchalant Bohemianism.

“Summerland” tells a tale we’ve seen before, then adds painterly flourishes which cast it in an enchanting glow.  The film may be flawed, but it is undeniably lovely.

Alice Lamb (Gemma Arterton) is a reclusive young writer doing research along the southern coast of England. The wars against Nazi Germany rages just across the channel and, because of the Blitz, the children of London are being relocated to the countryside. Unbeknownst to Alice, an unopened and ignored letter tells her that she has to provide a foster home to young Frank (Lucas Bond) and he lands on her doorstep in “Summerland.”

When this idyllic little drama opened on the sunny shore of southern England, “Summer of ’42 (1971)” came to mind. That feeling quickly dispelled when we meet Alice, a young woman considered an outsider in the small town – justifiably, as she is rude, anti-social, demanding, opinionated and without a sense of humor – and, by the kids, a witch. So, when the local government lady, Mrs. Bassett (Jessica Gunning), unceremoniously leaves the boy in her care, she is decidedly nonplussed by the arrival.

Alice’s way of coping with the boy is to tell him, simply, “Don’t touch my things.” Her idea for the care and feeding of a 12 year old boy is to give him a plate with a piece of raw meat and a potato to cook for himself. She blithely continues with her writing and research and does her best to ignore Frank. But, they actually share more things than not – that comes into play later – and the bonding begins.

Tyro feature writer-director Jessica Swale serves us a story that is both predictable and surprising. Alice, we see in flashback, was in a deep, loving relationship with Vera (Gugu Mbatha-Raw). But, two factors prevent them from being together – society does not allow them to show their love for each other and Vera wants a family and a child. Alice has never gotten over her loss and wistfully recalls those good days of before.

But, the reality of the situation is that, like it or not, she is responsible for Frank. She balks at this burden but, over the week she has to take care of him, she realizes the boy’s intelligence and that he is, in fact, a kindred spirit. This is where the predictability factor comes to play. The surprise, I will leave the viewer to find out. I, honestly, did not see it coming and was pleased by it – even if it leads to more predictability.

This is really a two-hander with Arterton and Bond playing well off of each other, making the bond that forms feel genuine. We get to see how Frank slowly changes Alice’s mind about him and about the town. It is a nice story and, though I readily figured out how it would end, I like the way it ends. The title refers to…well, you’ll figure it out.