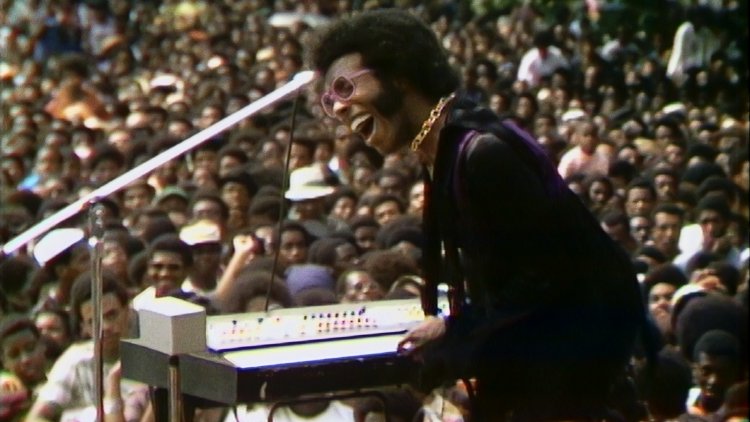 A month and a half before Woodstock in 1969, The Harlem Cultural Festival kicked off six free Sundays of extraordinary musical lineups for 300,000 people in Harlem’s Mount Morris Park.  Smaller events had been held the two previous years, but lounge singer, hustler and schmoozer Tony Lawrence got the City of New York, with sponsorship from Maxwell House coffee, to supersize the event to mark the 1st anniversary of Martin Luther King’s assassination.  The whole thing was taped by TV vet Hal Tulchin, but the footage ended up being stored in his basement for 50 years because no one was interested in purchasing ‘Black Woodstock.’  This piece of history has been brilliantly presented as both political commentary and joyous musical celebration by Ahmir “Questlove” Thompson in “Summer of Soul.”

There have been music documentaries that have highlighted their political significance before, like recent work “White Riot,” but never one which so deftly captured a shift in both music and a movement as Questlove’s work.  The Roots front man’s DJ experience comes into play as he finds exactly the right moments to drop the needle, performances by such artists as Gladys Knight and the Pips, The 5th Dimension or The Edwin Hawkins Singers enriched with defining anecdotes, the breaks between acts fueled with backstage stories.

The first artist we see is Stevie Wonder, performing to a sea of black umbrellas, the crowds’ spirits undampened.  The Harlem Festival stage backdrop is a bright color block collage reminiscent of Laugh-In’s joke wall.  Costumes favor bright yellows and oranges, emcee Lawrence first seen in an off white suite with a peach shirt and tie looking like a Creamsicle.  We hear from attendees, describing the concerts as counteracting the death of hope during a racially charged era not unlike today’s.  While NYC police patrolled the outskirts of the park, Lawrence hired Black Panthers to protect his audience.

We’ll learn how The 5th Dimension became connected with the musical ‘Hair’ and forged their hit ‘Aquarius/Let the Sunshine In’ at a time when many listeners assumed they were white.  Reverend Al Sharpton notes that Gospel music is ‘therapy for the stress of being Black in America,’ yet we are all lifted by Questlove’s knockout midsection climax, the extraordinary duet between generations that is Mavis Staples accompanying Mahalia Jackson for MLK’s favorite song, ‘Precious Lord.’  If this is the passing of a musical baton, Nina Simone’s ‘Backlash Blues’ and ‘Are You Ready?’ notes the moment the Civil Rights Movement transformed into Black Power.  It is serendipitous to note Lin Manual Miranda commenting about East Harlem’s music with acts like Ray Barretto, Hugh Masekela and Mongo Santamaria after the recent “In the Heights” controversy over its lack of Afro Latino representation.

After noting that ‘just because you introduce him doesn’t mean he’s there,’ Sly and the Family Stone’s emergence is used as a jumping off point to talk about Afro Centric fashion, bellbottoms and men wearing leather vests with no shirt.  The moon landing occurred during one of these Sundays, an opportunity for local news to interview audience members, all noting that the shows were far more important to them than white people wasting money going to space while they lived in poverty.  We’re quite knee deep in the documentary before the issue of the erasure of black history is raised, the fact that many will never have heard of this extraordinary concert series its own example.

“Summer of Soul” is both a glorious musical banquet and an urgent reminder of the cyclical nature of racial strife.  This historical document viewed through a modern lens is hugely entertaining and thought provoking.  “Summer of Soul” is a must see.

Back in 1969, the only thing me and my brother really wanted to do was attend the Woodstock music festival in upstate NY. We did not make it. At the same, about a 100 miles due south, there was another music festival going on that I knew nothing about – the Harlem Cultural Festival that spawned “The Summer of Soul.”

Boy, I thought I knew something about 1960s music. I am thoroughly embarrassed that this remarkable event was never on my radar. For 50 years, the amazing footage and recordings of that six-week, summer-long fest, held on Sundays starting at 3PM, were found lingering unseen in a basement.

Director Ahmir “Questlove” Thompson and his team of documentarians take (just some of) the found concert footage and, from both then and now, interviews of the A-list artists who played and those attendees who watched the performances with joy. This makes for a work that is rich in music and cultural analysis – it is telling that a big music event, back in 1969, that attracted 300000 (predominantly black) people is, until now, virtually unknown.

The question that I have is: how did this major music event go unnoticed? (Trick question: If you are a student of our history, you know exactly why.) Just to mention a few of the many performers and personalities that appeared on stage, we have Stevie Wonder, Mahalia Jackson, Nina Simone, The 5th Dimension, Gladys Knight and the Pips, the Chambers Brothers, Papa Staples and the Staples Singers, David Ruffin, Hugh Maselela, Moms Mabley and the always late Sly and the Family Stone. Interesting side note: the NYPD refused to provide security during Sly’s performance and the Black Panthers took over – with no problems had.

The filmmakers take care in showing us the wonderful music and its players – many of the tunes are already on my “dementia play list” – but the real impact of this fine work is the analysis of the event and, most important, answers to the question: how did this major music event go unnoticed? Many of us will appreciate the honesty of the answer and some may deny it. Find out for yourself.